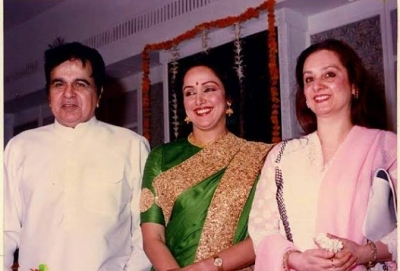 Mumbai– Tributes and condolences continued pouring in from the film fraternity for late legend Dilip Kumar all through Wednesday. The veteran actor passed away in a Mumbai hospital aged 98 in the early hours of the day.

Actors, singers, filmmakers and others associated with the film industry, especially whose lives he had touched, took to social media to mourn his demise, recall their experiences of meeting him and working with him, and offered their condolences to the bereaved family and his wife, veteran actress Saira Banu.

Actor Shahid Kapoor wrote: “We are all nothing but versions of you Dilip Saab. Every actor has studied you in awe. Wondering how you did it all. You were as close to PERFECT as it can get. As you return to your spiritual home. The prayers of millions are with you.”

Actor Anil Kapoor tweeted: “Our world is a little less bright today because one of our brightest stars has left us for the heavens. Dilip Sahab was very close to my father and I had the tremendous honour of sharing screen space with him in three of my most memorable films. He was and will always be the finest and greatest actor of our industry for me. He has inspired generations of artistes. Rest in peace Dilip Sahab, you remain in our minds and hearts forever.”

Actress Madhuri Dixit posted: “Every now & then some individuals come along who single-handedly alter the present & write history… One such legend was Dilip saab for the world of cinema.”

Actor Sanjay Dutt expressed: “So many special moments with Dilip Saab… he was like a father figure in my life. A huge loss for the film fraternity and for all of us, we have lost a legend today. My deepest condolences to Sairaji, may God give her strength in this tough time.”

Playback singer Asha Bhosle tweeted: “I’m very sad to hear that Dilip Saab is no longer with us. He was like a big brother to me. I have great admiration and respect for his wife Saira bhabhi who has really looked after and dedicated her life to him. Lots of love to her and the family. We share your grief.”

Actress Hema Malini posted: “Veteran actor, exemplary role model for all heroes, my respected co star in Kranti, Dilip Kumar ji, is no more. I recall a couple of visits to his house & the pleasant meetings I had with him & Saira ji. My heart goes out to Saira ji, his life partner of many years, for this loss.”

Actress Mrunal Thakur tweeted: “You have not just inspired every person to follow their dreams but have contributed to Indian cinema like no one else has. It’s unreal how all your films have been iconic! We will remember you for everything you are and have been. May your soul rest in peace.”

Actress Divya Dutta tweeted: “My mother and I have together watched his movies ! loved and adored him!! End of an era! That persona ,Those eyes , talent of thst magnitude.. @TheDilipKumar you left us a legacy !! RIP Yusuf saab. I’ll never forget watching naya daur sitting next to him!”

Actress Shilpa Shetty wrote: “A legend… an icon! From being called the Tragedy King to being an institution for generations of performers, there’ll never be anyone like you. Your legacy will live on forever. Sending prayers & love to Sairaji & family. May your soul rest in peace, #DilipKumar Saab.”

Veteran actor Anupam Kher tweeted: “The legend lives on!! There is and there will always be a part of #DilipKumar Saab in every Indian actor for generations to come! His performances were like magic. Thank you Sir for those amazing moments i could spend with you! You taught me so much about life, living & acting!”

Actor Kay Kay Menon wrote: “Thank you for all the inspiration Dilipsahab!! Always indebted to your genius!! Naman.”

Actor Nawazuddin Siddiqui tweeted: “The Greatest in the World Of Cinema. An Institution, An Inspiration & “The Pause”. The Thespian, me & my father admired closely and had watched all his work. His craft could be felt but can never be described in words. #RestInPeaceLegend #DilipSaab.”

Actor Emraan Hashmi posted: “Before I began my career my grand mom told me that seeing all Dilip Saab’s movies is all I would ever need to feel inspired and start learning the craft. An artist who was subtle, nuanced and never used unnecessary theatrics to portray his characters.”

Actor-comedian Johny Lever tweeted: “I am fortunate enough to have shared some precious moments with the great Dilip Sahab. I remember he did a small mimicry act for me while we were on tour, he served me Biryani once with his own hands at his home and many more such beautiful memories… It was amazing to see how such a great personality like him could be so humble and grounded. He is an institution we loved and learnt so much from. May his soul rest in peace and may God give strength to Saira Ji and his family.”

Veteran actor Annu Kapoor posted: “Thespian Sh Dilip Kumar has left for his heavenly abode . May his soul rest and peace and May god bless strength to Mrs Saira Banu and family to bear this loss.”

Producer Ashoke Pandit wrote: “Was fortunate to spend time with #DilipKumar Sahab as I was handling the Production of this historical show which was a tribute to 50 yrs of Hindi film music in the 80’s. No one can be better than him. #endofanera.”

Actress Sonali Bendre expressed: “We lost a gem today… Your contribution to cinema and your legacy will never be forgotten. #RIP #DilipKumar Sahab. Heartfelt condolences to Saira Banu Ji and his family.”

Actor Rahul Dev shared: “No one like him … The Sahab of Cinema … Incomparable … An institution & national treasure … Rest in peace Dilip Sahab … #Legend #DilipKumar”