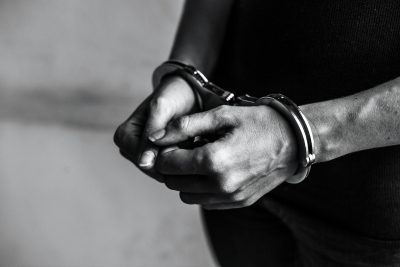 New Delhi– A man was arrested for allegedly slitting his wife’s throat suspecting her of infidelity in Delhi’s Maujpur area, police said on Monday.

Deputy Commissioner of Police (northeast) Sanjay Kumar Sain said a PCR call was received at Jafrabad police station around 9 a.m. on Saturday stating that a woman was lying injured in a house in Maujpur, Delhi after which a police team immediately rushed to the spot and found the woman, identified as Fatima, wife of Shahden Malik alias Shan alias Suhaib, lying dead in a pool of blood having sharp injury on her neck and also stab wounds on her back.

Twenty-two year-old Fatima’s husband was missing which made him the prime suspect and during preliminary inquiry, it was learnt that the couple was residing in the said house on rent for the last one and half months.

Accordingly, the police registered an FIR under section 302 (murder) of the Indian Penal Code and began probing the incident.

During the investigation, pressure was mounted on the parents of suspect Shahden residing in the area of Old Mustafabad, Delhi which ultimately led to his location and the accused was apprehended.

On sustained interrogation, accused Shahden confessed that he along with his friend Asif (19) committed Fatima’s murder. His associate Asif was also apprehended.

The investigation also revealed that Shahden had recently married Fatima after remaining in a relationship with her for several months, however, Shahden’s family was not ready to accept their marriage which ultimately strained their relationship.

The accused Shahden also disclosed that he had suspicion over the character of his wife Fatima and had warned her several times.

“After being frustrated with prevailing circumstances, he finally decided to get rid of her and also involved his friend Asif in the planning,” the DCP said.

On the day of the incident, Shahden and his friend Asif had a party somewhere in Delhi and he returned to his house in the wee hours on Saturday. As Shahden entered the house, he again had an altercation with Fatima after which he attacked her with a knife and then later fled from the spot. (IANS)

A coffee lovers guide to the best coffee plantations in India

Bankrupt UP bizman kidnaps neighbour’s son for ransom, then kills him