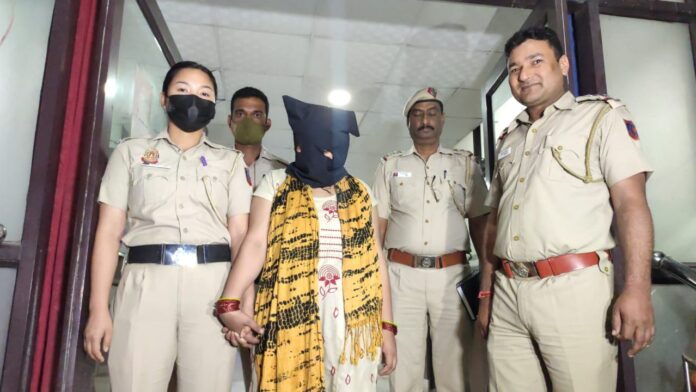 New Delhi–The investigation in the gruesome incident where a baby girl’s body was found in a microwave oven has discovered that the two-month-old was allegedly smothered by her own mother who then hid the body inside the appliance, Delhi Police said on Tuesday.

The incident was reported from south Delhi’s Chirag Dilli area on Monday evening and the woman, identified as Dimple, 26, was arrested on Tuesday.

DCP, South, Benita Mary Jaiker said that at around 4.30 p.m., police received information about a child going missing and when a team reached the spot they found that the said baby had been taken to Madan Mohan Malviya hospital.

“The hospital staff informed us that the child was brought dead,” the DCP told media persons.

As the police began enquiring about the matter, it was found that at the time of incident, the mother was alone at the house with her 3-year-old son and her infant daughter.

“We questioned several people in and around the house and the needle of suspicion pointed towards the mother of the deceased infant,” Jaiker said.

Based on the circumstantial evidence, the police took the mother into custody.

“During questioning, she seemed mentally disturbed as she was continuously changing her statement while narrating the incident. However, when I asked her this morning, she partially confessed to the crime,” the DCP said.

The deceased infant’s post-mortem examination has also been conducted and prima facie, the doctors told police that the death could be due to smothering, however, the exact cause of death will only be clear only after the post-mortem report is out.

“The doctors were not even to tell us anything about the injury marks on the infant’s body. We are awaiting the PM report,” Jaiker said.

Police are yet to establish the motive of the crime.

“It is a normal family. They had two grocery stores just beneath their house and they used to reside on the first floor,” the official said, adding that the infant was found dead inside a microwave oven on the second floor which was not used by anyone.

The DCP also revealed that there is a strong possibility that the child did not die on Monday when the incident was reported.

“The doctors have said that the time of death could be more than 12 hours, however, the exact time of death will only be confirmed after the post-mortem report,” she said. (IANS)