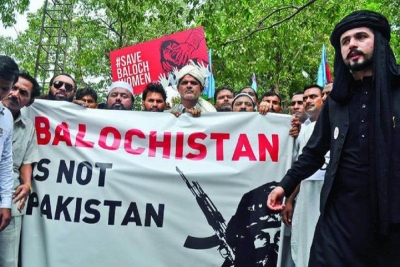 Quetta (Pakistan)– Death squads and locally armed militia in Balochistan supported by the Pakistan Army have been accused of carrying out human rights violations like enforced disappearances and kill-and-dumps at the behest of the Pakistani security forces, Balochistan Post reported.

In exchange for their services, the Pakistani forces have given a free hand to these “death squads” throughout Balochistan.

Saqib Hassani, who heads a death squad, is accused of threatening to abduct a minor girl at gunpoint. Saqib reportedly tried and failed to kidnap the seven-year-old girl and threatened her father that they will pick her up at gunpoint if he refuses to give her up, Balochistan Post reported.

The gir’s father, Ghulam Muhammad, said in a press conference that Saqib Hassani was threatening him and his family to hand over his daughter to him. He said that the man was fully intoxicated and flanked by armed guards who are provided to him by the law enforcement agencies.

Saqib Hassani belongs to the group which was previously headed by Hafeez Muhammad Hassani, who was allegedly picked up by the Pakistani forces in August 2016.

Hafeez used to traffic drugs throughout Balochistan with the help of Naveed. Naveed had once accused Hafeez of financial malfeasance and kidnapped him for a 6.8 million rupees ransom. The forces got the wind of the situation and fearing that their charade may come undone, they killed and buried Hafeez in a wilderness.

Saqib was then promoted as the head of Hafeez’s death squad, the sources said, Balochistan Post reported.

Baloch National Movement (BNM) Chairman Naseem Baloch expressed sympathy with Ghulam Muhammad and said that the incident befalling his daughter and his family is “heart-wrenching”, adding that kidnapping threats and forced underage marriage cannot be tolerated.

He also said that examples of such inhumane incidents do not occur anywhere in the world, not even in the most anachronistic societies, but they have become commonplace in Balochistan due to the Pakistani security forces.

He said in a media statement that the death squads are involved in social crimes like enforced disappearances and harassment of Baloch women and children, Balochistan Post reported. (IANS)