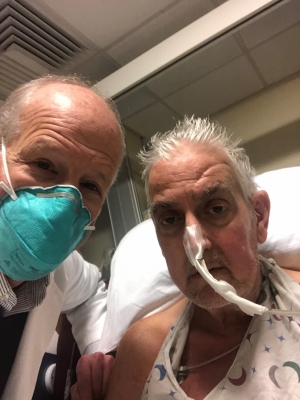 New York/New Delhi– Devastated by the loss of David Bennett, the 57-year old patient with terminal heart disease, who made history as the first person to receive a genetically modified pig’s heart, the researchers at University of Maryland Medical Center in the US said they have gained invaluable insights that will help future patients.

Muhammad M. Mohiuddin, Professor of Surgery and Scientific Director of the Cardiac Xenotransplantation programme, said they are grateful to Bennett for his unique and historic role in helping to contribute to a vast array of knowledge to the field of xenotransplantation.

“We have gained invaluable insights learning that the genetically modified pig heart can function well within the human body while the immune system is adequately suppressed,” Mohiuddin added in a statement late Wednesday.

“We remain optimistic and plan on continuing our work in future clinical trials.”

Bennett received the transplant on January 7 and lived for two months following the surgery.

His condition began deteriorating several days ago. After it became clear that he would not recover, he was given compassionate palliative care. He was able to communicate with his family during his final hours.

“We are grateful for every innovative moment, every crazy dream, every sleepless night that went into this historic effort,” David Bennett Jr. said in a statement.

“We hope this story can be the beginning of hope and not the end.”

Bartley P. Griffith, who surgically transplanted the pig heart into the patient, said Bennett “became known by millions of people around the world for his courage and steadfast will to live.”

Following surgery, the transplanted heart performed very well for several weeks without any signs of rejection. The patient was able to spend time with his family and participate in physical therapy to help regain strength.

He watched the Super Bowl with his physical therapist and spoke often about wanting to get home to his dog Lucky.

“As with any first-in-the-world transplant surgery, this one led to valuable insights that will hopefully inform transplant surgeons to improve outcomes and potentially provide lifesaving benefits to future patients,” Griffith added.

Earlier, researchers at University of Alabama at Birmingham, US, successfully conducted transplant of pig kidneys into a brain-dead human.

The organs implanted on a 57-year-old male brain-dead patient, produced urine and were not rejected.

In September 2021, a study published in the American Journal of Transplantation, showed a transplantation of a gene-edited pig’s two kidneys onto a brain-dead patient.