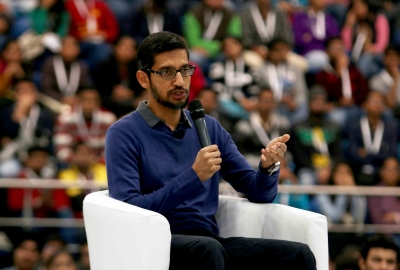 New Delhi– Though they lead Big Tech firms in the Silicon Valley in the US, cricket still runs in their veins and on Tuesday, Alphabet and Google CEO Sundar Pichai and Microsoft CEO Satya Nadella congratulated the Indian team, following their remarkable 2-1 series win over Australia in the four-Test Border-Gavaskar Trophy.

Shubman Gill (91), Rishabh Pant (89*) and Cheteshwar Pujara (56) all played brilliant knocks as India chased down a mammoth 328 on the final day of the fourth and final Test at the Gabba, thus pocketing the series 2-1 to retain the Border-Gavaskar Trophy.

Nadella tweeted: “Last hour of the last day of the last test. Test series for the ages. Congrats to Team India!”

“One of the greatest test series wins ever. Congrats India and well played Australia, what a series #INDvsAUS,” tweeted Pichai.

For Nadella, the leadership values he learnt while playing cricket in India helped him compete vigorously in the face of uncertainty — putting the team first and bringing out the best in everybody — during his 25-year career at Microsoft.

“The only poster I really wanted was one of my cricketing hero, the Hyderabadi great M.L. Jaisimha, famous for his boyish good looks and graceful style, on and off the field,” Nadella wrote in his memoir “Hit Refresh”.

For the cricket-obsessed Nadella, the game has been life, and more. It was cricket that shaped the contours of his professional and personal life.

“No matter where I am, this beautiful game is always in the back of my mind. The joy, the memories, the drama, the complexities, and the ups and downs — the infinite possibilities,” Nadella wrote in the book.

Nadella said recently that Sachin Tendulkar is his favourite cricketer from the past while he loves to see Virat Kohli batting nowadays.

In July 2019, Pichai had attended the crucial World Cup match between India and England at Edgbaston.

The BCCI had posted an image of Pichai posing with batting great Sachin Tendulkar on its social media pages.

An avid cricket fan, Pichai had admitted of dreaming of being a cricketer during his growing up years and idolised Sunil Gavaskar and, later, Tendulkar. (IANS)