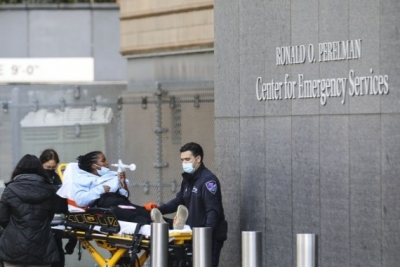 Washington– Covid-19 cases and deaths at US nursing homes are rising to a new peak amid the Omicron surge across the country, according to latest data by the Centers for Disease Control and Prevention (CDC).

Nursing homes reported a near-record of over 32,000 cases among residents in the week ending January 9, an almost sevenfold increase from a month earlier, Xinhua news agency reported citing the CDC data published on Monday.

The new weekly increase of nursing home cases marks the highest since the week ending in December 20, 2020 when over 32,000 cases were reported.

A total of 645 Covid deaths among nursing home residents were reported during the same week, over 30 per cent increase from the week before.

Health experts are concerned that deaths may continue to rise as the Omicron variant is spreading rapidly across the country.

Nursing home officials are responding to the surge by limiting visitors, reinstituting social distancing, and pushing more residents and staff members to get vaccinated and boosted.

Nursing home residents were hit the hardest since the onset of the pandemic in the country.

Till date, 95 per cent of people aged 65 years or older in the country have received at least one dose of Covid-19 vaccine and 87.9 per cent are fully vaccinated, according to CDC data.

The recent Covid-19 surge in the US is leading to record high cases, hospitalisations, and critical shortages of healthcare staffs.

The country is now averaging nearly 800,000 new cases each day and nearly 1,800 deaths each day, up significantly week by week, according to the CDC data.

Some colleges across the country went remote again as students return to school after winter breaks, in order to avoid increasing infections on campus.

Surgeon General Vivek Murthy said on Sunday the next few weeks will be tough.

“The challenge is that the entire country is not moving at the same pace,” Murthy said in an interview with CNN.

“The Omicron wave started later in other parts of the country. We shouldn’t expect a national peak in the coming days.” (IANS)