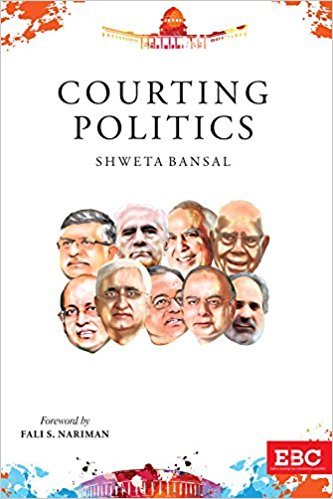 New Delhi–One is described as calm as a millpond, another as an “incredible flirt” who terms himself a “sinner with a clean conscience”; then there is a “details lawyer” and another who is “arrogant about his gumption”. What binds these four individuals, and five others, together is the fact that they have managed to stride the worlds of law and politics with consummate ease without needing to wear their affiliations on their sleeves.

Noting that the Indian Parliament is headed, layered and controlled by legal luminaries, debutante author Shweta Bansal, who has just won a place in the Indian Foreign Service after a bitter legal battle, told IANS in an interview that she “discovered that these lawyers in politics have not been written about and blinkered and incomplete stories float about them in the public domain, which barely do justice to their lives and achievements”.

The outcome, after three years of interviews and research, is the just-published “Courting Politics ” (EBC/Rs 695) a 450-page tome that serves as an invaluable chronicle of the journey of these nine individuals in the post-emergency (1975-77) years with today’s day and age marking a watershed in their lives.

Why bring in the Emergency?

As eminent lawyer Fali S. Nariman writes in the Foreword, for 35 years since the lifting of the Emergency, “lawyer-politicians in India (and there were many) had no qualms of conscience about their loyalties. During this period, a lawyer Member of Parliament could truthfully say he was loyal to parliament as well as to the courts. No longer”.

“With the re-emergence, after over three decades, of a super-majoritarian government (as there had once been in the 1970s), the lull is broken. Each of these nine men must now make a choice and it is a dilemma that they face — a dilemma that did not trouble the lawyer-politicians of yesteryears,” Nariman writes.

Who then are these nine individuals?

A fair mix across the spectrum, but Bansal laments she could not include any women and explains it thus: “While there are some successful women politicians — Sushma Swaraj, Mamata Banerjee and Mayawati — who hold law degrees, they have a negligible legal practice. On the other hand, lawyers such as Flavia Agnes, Meenakshi Lekhi, Pinky Anand and Indira Jaisingh have impressive legal careers, but prime political benefits still elude them. Jayanthi Natarajan and Pramila Nesargi are examples of women who have been successful in both law and politics, but have largely remained confined to regional spheres.”

“The under-representation of women lawyers in Indian politics raises grave concerns… More women in positions of power confer a greater sense of political legitimacy to the government simply by virtue of the fact that it represents the population more fairly,” Bansal says, earnestly hoping that when she attempts the exercise the second time around, there will be an equal number of men and women as its subjects.

What, then, are the insights the author provides on the nine individuals?

Sibal: “Calm as a millpond with an extremely optimistic outlook — both winning characteristics for success in law and politics.”

Baig: “God lies in details and in the annexures of the case brief. He is a details lawyer. He is not a special leave petition type of lawyer.”

Jethmalani: “Despite his honesty, the man cannot help but be an incredible flirt and is notorious for his extramarital affairs… Nevertheless, he claims to be a sinner with a clean conscience…. Ram is a man full of contradictions. He is a crusader against institutional corruption on the one hand, the defence counsel of corrupt politicians on the other.”

Shanti Bushan: “Many a times a successful lawyer makes a hopeless parliamentarian; and a brilliant parliamentarian may prove to be an ineffective lawyer. Only a few people combine both the skills and are effective in both… Bhushan is proud of his achievements and is arrogant about his gumption.”

Chidambaram: “Quite like the great economist, politician and strategist Kautilya Vishnugupta, Palaniappan Chidambaram is brisk, cerebral, crafty, direct and unbending.”

Singhvi “maintains a precarious balance between self-criticism and overweening confidence”, Jaitley “can make deals like nobody else and is said to know everyone and everybody worth knowing in Delhi and its power corridors”, Prasad “is passionate yet cautious, authoritarian yet informal, intelligent but not creme de la creme….(in whom) one can see a brand new script of a Bihari lawyer”, while Khurshid “is very ambitious but does not wear his ambition on his sleeve”.

Born in Lucknow into a family devoted to public service, Bansal is a product of the La Martiniere Girls’ College.

“A childhood accident left me differently abled, but what one lacks in physical attributes, one makes up for in sheer mental strength, I guess. So, I was always good academically, went on to do law from NUJS Kolkata and then worked as a corporate lawyer at Amarchand Mangaldas & Suresh A. Shroff & Co.

“The desire to take the civil services led me to take the exams and clear them — however things were not easy for me. I had to fight the government for over three years regarding my rank and cadre, after which a landmark judgement helped me through to the IFS,” Bansal told IANS.

The saga makes for a book of its own. (IANS)