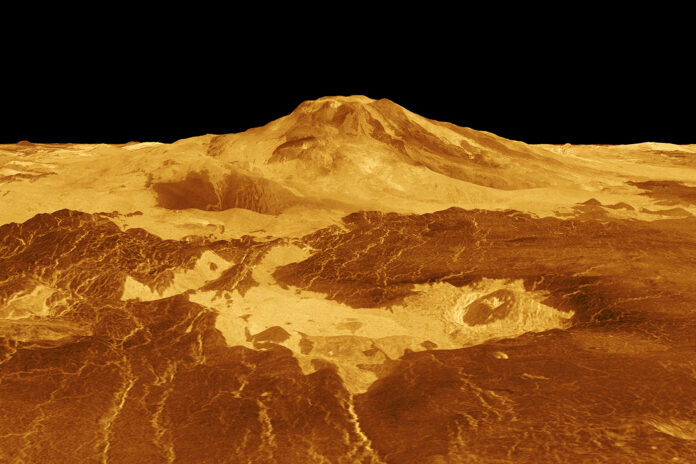 The Venusian atmosphere is so heavy that the pressure on the surface of the planet is more than 90 times that of Earth. That’s similar to the pressure at about 3,300 feet deep in the ocean on our planet. There is no liquid water on the surface of Venus, and thousands of massive volcanoes—some still active—mark up our neighboring planet.

Venus is a veritable hellscape.

But a team of Northeastern students wants to send human explorers to check it out. And their plan has earned them recognition by NASA.

Their mission concept was selected as a finalist in NASA’s Revolutionary Aerospace Systems Concepts – Academic Linkage program, an annual university-level engineer design competition to devise innovative solutions to advance human exploration of space. The team will showcase their mission plan in a competitive design review presented to NASA and aerospace industry leaders in June.

“NASA and other space organizations have gone to the Moon and Mars, which are quiet, cold places, whereas Venus… there’s just so much happening and it’s completely different from what we’re used to,” says Belén Ou, engineering lead for the project and a mechanical engineering major at Northeastern. “It’s basically like what I imagine hell to look like. It’s a challenge.”

The team is made up of 14 members of the Northeastern University Students for the Exploration and Development of Space club. The mission, which is officially titled “Venusian Atmospheric and Land Exploration: A Human-Assisted Low-Latency Approach,” yields a fitting acronym: VALHALLA, a nod to the the afterlife palace of slain warriors in Norse mythology ruled over by the god Odin.

The mission wouldn’t put humans on the surface of Venus—that would be impossible to do without killing them. Instead, the humans would fly by the planet to get a closer look at the planet from above and operate a team of drones that would descend deep into the torrid atmosphere of the planet and down to the surface.

The mission would occur in two waves. Ahead of the humans’ flyby, a spaceship dubbed Freyja (in keeping with the Norse mythology) would deploy a set of scout drones, named Ravens. The Ravens would scope out sites on Venus for the mission scientists to better determine where to send later drones for a closer look.

Then, when the humans get close enough to Venus on their spaceship, Odin, they would direct Freyja to release the next mechanical envoys to descend toward the Venusian surface: the Wolves. Each Wolf drone would be equipped with cameras and sensors to study the surface, atmosphere, and climate of the planet in as much detail as possible before it is rendered useless by the harsh Venusian environment.

“It’s just juggling all of these different constraints to get that perfect middle of, ‘OK all these systems work well enough to last three hours, maybe five if we’re lucky,’” Ou says. “It’s a matter of playing with, ‘What’s going to fail first and how do we fix that?’”

That’s why a human presence nearby would be crucial for the mission, says K. Dillon Lewis, project lead for VALHALLA and a computer science and physics major at Northeastern. “If you’re close to Venus and you have people there, you can make quicker decisions, act faster, and, especially regarding the science, if you see something interesting on Venus, they can react much, much faster to that than if we see it on Earth.”

It can take light about 13 minutes to travel from Venus to Earth, meaning that any information beamed back from an envoy mission would carry at least such a delay. But with Odin flying by Venus, the team says, that data could arrive in front of human eyes in just about 10 seconds.

“It’s so much easier for humans to recognize interesting scientific features than machine learning or some kind of algorithm, especially in early exploration,” Lewis says. “I mean, we don’t know what the surface looks like, so if we have some geologists aboard operating these, they can take notice of interesting features and go towards them, look at them, maybe study them more in detail.”

Venus is often thought of as Earth’s twin because the two cosmic neighbors are similar in size and both are rocky. And scientists think the planet was once much more like our own, but the environment changed and, in a process called the runaway greenhouse effect, Venus became the inferno that it is today.

Studying Venus’s history could have implications for understanding the evolution of our own atmosphere here on Earth, says Meghan Gallagher, science lead on the VALHALLA team and a bioengineering major at Northeastern.

In addition to probing Venus’s mysteries, this mission would carry astronauts deeper into space than any humans have gone before. In doing so, it would provide a valuable opportunity to study the effects of space travel on human health with future trips elsewhere in the solar system in mind. So the astronauts would also be tasked with testing and monitoring their fitness, health, blood composition and other metrics.

The VALHALLA team will present their mission concept, complete with engineering, science, and budgetary plans, to NASA and other aerospace leaders on June 16.

“It’s felt a little surreal at times. It is NASA,” Gallagher says. “It just kind of hits you, ‘Oh, this is a huge deal.’”