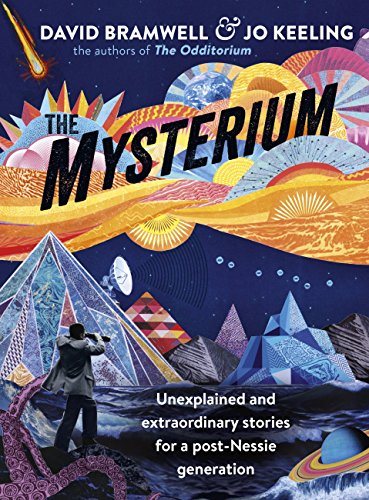 The human brain can exhibit a curious duality. On the one hand, we generally prefer to understand everything that we face and know the reasons for what happens, and on the other, we relish the mysterious, the inexplicable and the uncanny. And there is a lot of it beyond the fervent desires of the most imaginative.

Gone are the days we were content with trying to find out if the Loch Ness monster actually existed (or in other places, Big Foot or the Abominable Snowman), or aliens regularly visited us, or whether a shadowy cartel actually runs the world. In the contemporary era, there are many other strange, weird and spooky mysteries we are unable to solve despite all our technological development.

“Nowadays, many of us feel nostalgic for a more innocent age when we pored over compendiums of ‘the unexplained’… Their ‘endless search for answers’ immersed us in fantastical tales of prophesy and atmospheric oddities, and blurry photos of Nessie, Big Foot and flying saucers.

“But while a lack of credible proof in our digital age casts doubt over such stories, the universe is as mysterious to us now as it was for our predecessors,” say Bramwell, a radio presenter and author, and Keeling, a journalist-cum-author, in this book — their second after “The Odditorium”, featuring some “tricksters, eccentrics, deviants and inventors whose obsessions changed the world”.

“Over the next 240 pages, we’ve curated 40 truly compelling mysteries, oddities and remarkable tales for the digital age — from the modern-day powers of placebo to Hikikomori, which sees a million Japanese youngsters withdrawing from human contact,” they say.

These mysteries also range from the shadowy inventor of Bitcoin to the shoes — with human feet inside — washing up on a part of Canada’s Pacific coast. There are the cats that can predict human death and those that led political parties to the creepy CCTV footage of a Canadian girl before she went missing.

Bramwell and Keeling also contend that part of the mysteries may owe to the dazzling inventions that seem inescapable part of our lives in this day and age. “While ancient mysteries used to take root and grow organically, passed through generations through storytelling, now we are globally connected. Far from debunking the unknown, the Internet has become a breeding ground for new enigmas. Technology gives mystery renewed strength; stories escalate quickly.”

And they give some telling — and disturbing — examples, especially of an Internet-created ghoul which started claiming real-life victims.

The 40 stories, dealing with mysteries, both natural and man-made, are divided into seven sections. “Strange Fruit” includes such oddities as people and places that don’t exist but are featured in reliable guidebooks — and why. “Ghosts in the Machine” takes up the stories of the monster that jumped from Photoshop into our nightmares, Satoshi Nakamoto of Bitcoin fame, and the personal classified ad that inspired a cult horror film.

“Are We Not Human?” tells of the strange worship of the British Queen’s consort, “Strange Sounds and Spooky Transmissions” has stories of ghost radios, strange humming, the world’s worst orchestra, as well as singing sand dunes, and “Supernature” deals with ball lighting (remember Tintin’s “The Seven Crystal Balls”), celestial phenomenon that has — and could again — cripple our vaunted communication networks, and a “Bermuda Triangle” in space.

But “Mind Games” is among the best, specially the expositions on “Operation Mindfuck”, “Roko’s Basilisk” and the men who scared themselves to death, while the collection ends with “the really creepy stuff” about the detached feet’s landfall and the girl’s mysterious disappearance.

Like the authors’ previous work, this book, written in a dryly witty and non-judgmental manner, informs and, above all, intrigues with the strangeness of our world, which only seems certain to increase. (IANS)