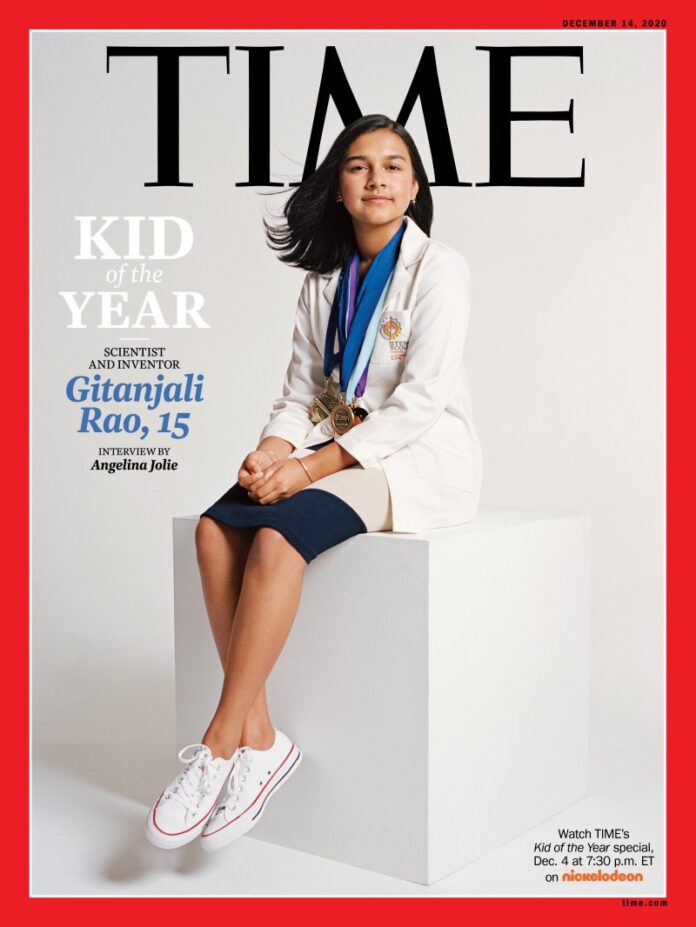 New York–TIME magazine has put an Indian American teen “scientist and inventor” Gitanjali Rao on its first ever ‘Kid of the Year’ cover, selected from a field of more than 5,000 nominees for her “astonishing work using technology to tackle issues ranging from contaminated drinking water to opioid addiction and cyberbullying”.

Wearing a white lab coat over a casual dress and sporting a bunch of medals hanging from lanyards, Gitanjali Rao is pictured on the cover of TIME edition dated December 14. Seated on a white block, her shoulder length hair blowing in the wind, Rao cuts an image of cool confidence in a year that has been headlined by scientific breakthroughs.

“Even over video chat, her brilliant mind and generous spirit shone through, along with her inspiring message to other young people: don’t try to fix every problem, just focus on one that excites you,” writes Rao’s interviewer Angelina Jolie.

Rao’s latest innovation is Kindly, an app and a Chrome extension – which uses machine learning technology to detect early traces of cyberbullying.

“I started to hard-code in some words that could be considered bullying, and then my engine took those words and identified words that are similar. You type in a word or phrase, and it’s able to pick it up if it’s bullying, and it gives you the option to edit it or send it the way it is,” Rao explained to Jolie over a video call.

“The goal is not to punish. As a teenager, I know teenagers tend to lash out sometimes. Instead, it gives you the chance to rethink what you’re saying so that you know what to do next time around.”

Rao is currently working on what she calls an “an easy way to help detect bio-contaminants in waterethings like parasites”.

Rao told Jolie she hopes to create something “inexpensive and accurate” so that people in poorer economies can use it to test their water quality.

A television version of TIME’s ‘Kid of the Year’ airs on December 4 at 7.30 p.m. ET on Nickelodeon channel. (IANS)