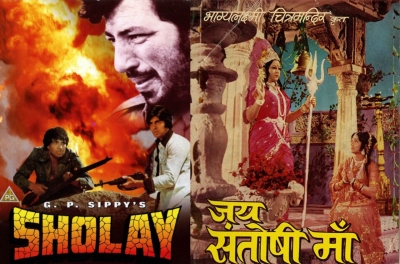 A newspaper report I came across was shocking beyond belief. I was flabbergasted to put it mildly. It said filmmakers want research agencies to find out what will work at the box office! Isnt it pathetic that filmmakers dont know anymore what the people want to see or what kind of films they should produce?

When did a musician or a painter start seeking a survey to decide what to compose or paint?! All one can do is to work on conviction and wish it is appreciated, accepted.

Have filmmakers lost touch with the masses, their audience, because for nearly two decades, corporate houses have been bankrolling them not knowing at all what the film business was?

So, you did not care about the content and just made what in the film industry is known as a proposal. A proposal is one which has a top star and all the other dressing-up, but no content worth the viewer’s while! It was not like the era when a filmmaker risked all he had and borrowed from a film financier. Money was pouring in from the corporate houses. They bet on a maker who could put a project together as if that guaranteed returns.

Who or which research agency could have predicted such a phenomenal success for ‘Jai Santoshi Maa’, a mythological with no face value a maker could count on! There are numerous such examples.

There is no God of Box Office was a phrase used in a lighter vein. It meant even God cannot predict a film’s prospects. Nobody knows the secret. If that were so, the makers of both ‘Sholay’ and ‘Jai Santoshi Maa’ would have been repeating their success formula.

‘Ghayal’, an action revenge film, and ‘Dil’, a youth-oriented romantic film, were released on the same day, June 22, 1990. The two films were poles apart in themes. I don’t know if any survey could have predicted which one would work, but both went on to be super hits.

According to this media report I mentioned at the start, there are some agencies that promise to find out from the masses, especially the youth, and enlighten the producer on what would work. The filmmakers want to take the cue from the OTT platforms as to what works with the viewers. Where is the comparison?

What works with the viewers? Take the example of ‘Scam 1992: The Harshad Mehta Story’ on OTT and the feature film, ‘Big Bull’. Both were based on the story of the stock market con of Harshad Mehta. ‘Scam 1992’ was hailed as one of the top few OTT features ever, but ‘Big Bull’ failed miserably! Can a survey agency determine what it is that makes OTT content tick while films fail?

One agency claims to have a few lakh youth on its list. So, will their opinions or choice (though they will never be the same) help this agency draw conclusions on the trends?

Earlier, films were made with a number of characters and stories that were leisurely told, and any film short of 150 minutes was not found to be worth the money spent by people who bought cinema tickets. Compared to that, films today do not have the content for more characters and don’t last for more than 90 to 120 minutes in most cases.

Surveys are something a company assigned to an agency such as Hindustan Thompson to evaluate its product range or when it planned to launch a new product in competition to already existing products. I have been a subject many times.

A routine survey was just about filling up a form, but there used to be what was called an ‘In-Depth Survey’. This took an hour or so and you did not mind because the surveyor was usually known to you and he treated you with snacks while he carried on. The product to be launched was never mentioned but the existing similar products were; if you used or liked any of them, you were asked the reasons. That gave the emerging brand an idea about what was preferred.

How does such a survey help a filmmaker? If a filmmaker does not know what works with the audience, he might as well not indulge.

Anees Bazmee, a successful writer-director of Hindi films, decided to conduct his own survey. He asked me to help with a list of successful films from the 1950s/60s and the 70s so that he could watch all of them and find out what made so many of them with different actors work in the same year. This era produced multiple hits each year.

Even the best judges of a film’s box office potential got real feedback about a film only after its release. The strategy was to watch a film with the audience, follow them to the loo during the interval and after the film ended, and then stick around in the cinema premises to hear the comments. The reactions one heard about a film were expletive-laden, whether the reports were for or against the film.

We like to follow the trends of Hollywood. So, we also tried this old Hollywood practice of ‘Paid Previews’. What did our people do? Released a new film a day or two earlier in the evening shows instead of the normal Friday release. The admission rates were increased for those seeking the privilege of being the first to watch a film.

This is not how the real Hollywood paid previews worked. A film was shown to a willing and paying audience without the title or cast mentioned. At the end, their views were sought. Since the viewer had paid, correct feedback was expected. It worked to correct the content if necessary.

What the Hindi filmmakers are doing now is remake South hits. What better survey do you need than these tried and successful films?

The magic phrase for a film was ‘Universal Acceptance’. So, every maker made something that the audience in general would like. Now that you get finance without risk, you make films like ‘Badhai Do’, a film about a man and a woman who have same-sex preferences. Does this subject sound like it had ‘universal appeal’? Universal appeal means something that the audience from the first row to the last in the balcony can identify with. A film which can be seen with the family.

The failure of Amitabh Bachchan’s AB Corp was the first to indicate that running a film company was not the job of marketing graduates, the MBAs. You had to have an instinct for this kind of creativity. They are better off selling consumer products and they need surveys for that.