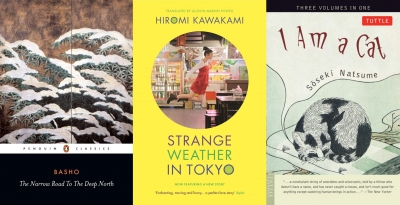 Any country or culture’s traits would presumably find reflection in its literature. The Japanese, as per foreign perceptions or stereotypes, if you like, are homogenous, exhibit a social and hierarchical sense of identity, value traditions, order and obedience, are polite and reserved, and are known for aesthetic, intricate and dependable craftsmanship.

Does their literature meet this yardstick?

Among the oldest and richest literary traditions, and holding a number of singular achievements, ranging from the world’s first-ever novel to making comic books acceptable for reading across various ages — by the famous ‘manga’ — Japanese literature does not correspond to most of these perceived traits.

Take up works, spanning over the last 10 centuries till the present, and you will not find much homogeneity, or subsuming of individual identity, while there will be both overt and covert subversion of order and tradition, breaking of taboos, and a lot of disorder — both personal and social, and even dystopia. But, yes, the well-developed aesthetic sense and craftsmanship predominate.

And women, who have been the flag-bearers of the literary tradition, right from its inception, are still at the forefront.

However, whenever Japanese literature is mentioned, the two names that generally come to mind are Haruki Murakami and Kazuo Ishiguro. This is despite the fact that the latter has grown up in the UK and though his first two books — “A Pale View of Hills” (1982) and “An Artist of the Floating World” (1986) — have a Japanese setting, it is an “imaginary Japan”, as he himself admitted once.

There is also another Murakami — Ryu Murakami, best known for “Audition” (1997, movie 1999) and “From the Fatherland, With Love” (2005) — and about them, it is safest to say that all those who are squeamish should keep away.

Then, those of a certain age may remember Yukio Mishima, particularly for the manner of his passing in 1970.

But like any other vibrant literary tradition, Japanese literature is also a broad expanse covering all genres, from horror to romance, from fantasy to crime, from history to social commentary, and having enough to interest readers.

Aficionados have their own favourites, but for those beginning the journey, let’s try to pick up a representative selection of the known and the less-known.

As mentioned, the female courtier Lady Murasaki’s 11th-century “The Tale of Genji”, the rollicking tale of a royal prince made a commoner and his turbulent romantic life, is deemed the first-ever novel as well as an invaluable depiction of Heian-era Japan. But Lady Murasaki had competition in her time too, from nearly contemporary women authors.

Though they did not dip into fiction, both these two authors, a noblewoman only known as Takasue’s Daughter or Lady Sarashina, after a province where her husband was stationed, and courtier Shonagon Sei have left equally compelling descriptions of their life and musings.

“The Sarashina Nikki” or “As I Crossed a Bridge of Dreams: Recollections of a Woman in Eleventh-Century Japan” (translated Ivan Morris, 1975) can also lay claim to being the first travelogue. Recounting her life from her pre-teen years to well into her 50s, including her travels and pilgrimages, in limpid and evocative prose, it also dwells upon her dreams — with at least 10 figuring in it.

Shonagon’s “Makura no Soshi” or “The Pillow Book” (1967) comprises personal contemplations, her take on court events and her contemporaries, and a number of lists, like “Things That Arouse a Fond Memory of the Past” (eg. a night with a clear moon) or “Things That Give a Clean Feeling” (eg. the play of light on water as one pours it into a vessel).

A period of strife marked the next three centuries and its literature was accordingly marked by descriptions of war, and themes of honour and sacrifice.

It was at the end of the seventeenth century, however, that we come upon a masterpiece, which is celebrated poet Matsuo Basho’s “Oku no Hosomichi” (“The Narrow Road to the Deep North”).

Known as the progenitor of the haiku verse form, though he himself expressed a preference for the ‘renku’ form of collaborative poetry, the poetic account of his travels to the north of Japan — “Every day is a journey, and the journey itself is home” — is enlivened by his poetic oeuvre — eg. “The summer grasses/Of brave soldiers’ dreams/The aftermath”.

For the rest, we need to come to the 20th century, as the country’s opening up to the world, the resumption of powers by the Emperor, and widespread modernisation began to show their effects.

Natsume Soseki is considered the first modern novelist, and his debut novel “I Am A Cat” (1905, English 1972) is a biting satire on a society torn between tradition and modernity told from the viewpoint of an anthropomorphised domestic cat who uses the grandiloquent pronoun of “wagahai” to describe itself.

Soseki’s other works include “Botchan” (1906), another humorously satirical tale about the travails of a teacher posted to a regional school — drawing on his own experiences, the coming-of age “Sanshiro”, and more.

Authors such as Ryunosuke “Rashomon” Akutagawa, Junichiro Tanizaki ( “A Cat, A Man, And Two Women” or “The Makioka Sisters”) and Yasunari Kawabata (“Snow Country”), Japan’s first Nobel Literature laureate, flourished before World War II, known for their masterly language and explorations of love and sensuality in the militarised millieu.

Kenji Miyazawa’s classic fantasy “Night on the Galactic Railroad”/”Night On The Milky Way Train” (1927, English c. 2014) also dates from this period and has a powerful message of hope and purpose of life.

Japanese literature, however, came into its own with the sweeping post-war changes. Listing even a representative section is no easy task, but let’s try with some, now that they are available in English due to the efforts of publishers like Pushkin Press.

His “Inspector Imanshi Investigates” (1961, English 1989) is an atmospheric police procedural, traversing around various areas and demographics, as the police struggle to first identify a badly mutilated body found at a Tokyo railway station, and then, the reason for the murder.

As Japan combined its continuing modernisation with technological innovation to become one of the world’s leading economies, the individual and social strains of its work culture also became key plot devices. And again, women led the charge — along with the attack on gender roles and stratification in some unique styles, ranging from the surrealistic to the Kafkaesque.

Hiroko Oyamada’s “The Factory” (2013, English 2019) is a somewhat allegorical account of three employees beginning work at a sprawling unnamed factory in an unnamed Japanese town, where they have every convenience but are expected to do inexplicably meaningless tasks. Some curious animals like “factory shags” in the compound add to the surrealism.

Also relevant for our times of shifting memories and contested narratives is Yoko Ogwa’s “The Memory Police” (1994, English 2020), which takes George Orwell’s “1984” to a more frightening level, while giving a startling insight into human attachment for objects.

Then, last but not the least is Mieko Kawakami, who created a sensation with “Breasts and Eggs” (2008, English 2020), an absorbing look into women’s relationship with their bodies. However, it is her novella “Ms. Ice Sandwich” (2018), about a young boy’s introduction to love and the pains of growing up, that should be read first.

There are plenty more but start with these. (IANS)