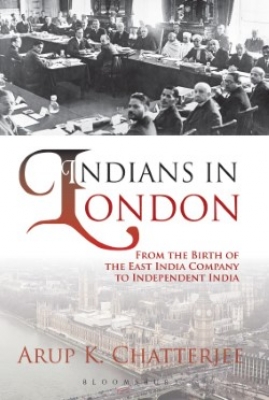 In September 1600, Queen Elizabeth and London are made to believe that the East India Company will change England’s fortunes forever. With William Shakespeare’s death, the heart of Albion starts throbbing with four centuries of an extraordinary Indian settlement that author Arup K. Chatterjee unfolds in “Indians in London” (Bloomsbury).

In five acts that follow, we are taken past the churches destroyed by the fire of Pudding Lane; the late eighteenth-century curry houses in Mayfair and Marylebone; and the coming of Indian lascars, ayahs, delegates, students and lawyers in London.

From the baptism of Peter Pope (in the year Shakespeare died) to the death of Catherine of Bengal; the chronicles of Joseph Emin, Abu Taleb and Mirza Ihtishamuddin to Sake Dean Mahomet’s Hindoostane Coffee House; Gandhi’s experiments in Holborn to the recovery of the lost manuscript of Tagore’s Gitanjali in Baker Street; Jinnah’s trysts with Shakespeare to Nehru’s duels with destiny; Princess Sophia’s defiance of the royalty to Anand establishing the Progressive Writers’ Association in Soho; Aurobindo Ghose’s Victorian idylls to Subhas Chandra Bose’s interwar days; the four Indian politicians who sat at Westminster to the blood pacts for Pakistan; India in the shockwaves at Whitehall to India in the radiowaves at the BBC; the intrigues of India House and India League to hundreds of East Bengali restaurateurs seasoning curries and kebabs around Brick Laneï¿½the book details all this and more.

“Indians in London” is a scintillating adventure across the Thames, the Embankment, the Southwarks, Bloomsburys, Kensingtons, Piccadillys, Wembleys and Brick Lanes that saw a nation-a cultural, historical and literary revolution that redefined London over half a millennium of Indian migrations-reborn as independent India.

Arup K. Chatterjee is an Associate Professor at O.P. Jindal Global University. In 2014, he was a recipient of the Charles Wallace fellowship, to United Kingdom. His interests are in the history of British imperialism, politics and philosophy; British cultural and historical encounters with India; and colonial and postcolonial historiography of India; Vedanta and Nondualism; and Indian philosophy and psychoanalysis.(IANS)