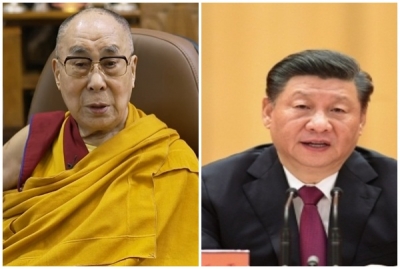 Recently, China-appointed 11th Panchen Lama, Gyaltsen Norbu (GN) who acts only as a mouthpiece of the Chinese Communist Party (CCP), was sent by China to attend a religious conference in Sichuan in July, was ignored by ordinary Tibetans who had been told by authorities to turn out to greet him. The only people who came to see him were those whose attendance had been specifically arranged by the Chinese authorities.

Abbots and Monks in monasteries in the region had been coerced into receiving and greeting the GN, and were ordered to pose for pictures with him. Chinese authorities threatened the local Tibetans to grant traditional religious reception to GN in their localities failing which their name would be struck off from the government schemes including subsidised rations, etc.

The Chinese government often uses Tibetan religious figures for political propaganda and publicity purposes to show to the world that there is freedom of religion in Tibet. However, in reality these visits are choreographed under the direct supervision of the Chinese authorities.

GN was named as 11th Panchen Lama by China in May 1995 to replace Gedhun Choekyi Nyima (GCN) who was selected by the Dalai Lama as 11th Panchen Lama, and who vanished into Chinese custody together with his family and has not been heard from since. But in May 2020, China had said that he was a college graduate with a job, and that neither he nor his family wished to be disturbed in their “current normal lives”.

However, Chinese authorities have had difficulty persuading Tibetans to accept GN as the official face of Tibetan Buddhism in China, as ordinary Tibetans and monks are traditionally loyal to the Dalai Lama and have been reluctant to acknowledge or receive GN. Gyaltsen Norbu has been called a ‘stooge of the atheist CCP government’ by Tibetans. Ever since, GN has been paraded annually in Tibet, accompanied by police, Chinese officials and a massive publicity operation involving hundreds of coerced worshippers. In between these visits, he has effectively been held under house arrest in Beijing and never been allowed to travel freely or to speak openly with foreigners. GN’s lack of freedom appears never to have been questioned by the Chinese authorities, apparently because they imagine effective incarceration in Beijing to be appropriate.

Also GN is often not called by CCP leaders to attend the important functions and anniversaries of China as well as Tibet. During the visit of Xi Jinping to Tibet, GN was not invited to Tibet, though he was just a few miles away in Sichuan Province. During the recent visit of Wang Yang to Tibet, GN was also not invited. Being a Tibetan, GN is not given importance by the CCP leaders. For CCP leaders he is a puppet to be used to exhibit to the world that China supports religion and secondly to control the reincarnation of the Dalai Lama. In reality, GN is nothing more than a prisoner in China. He is under house arrest in Beijing and he cannot visit the places of his own choice. He is directed by the CCP leaders about which place to visit and is told what he has to speak. Sometimes Tibetans inside Tibet and in Diaspora pity on him though they have no reverence for him.

Visits of GN to Tibet and areas inhabited by Tibetans are crucial for China as these visits are being used for transmitting China’s religious policies, warning Tibetans to be wary of superstitious beliefs and asking Tibetans to be more hardworking. It is a clear indication to Tibetans that religious beliefs and practice will be dwindled in coming days. GN’s visits are an attempt to boost his image and also promote Xi Jinping’s vision on Tibet.

During his visit , GN always propagate sinicization of Tibetan Buddhism and claim that it is necessary to be absorbed into Chinese culture and adapted to communist society. Instead of giving teachings as a religious figure, GN always talks politics. He always says that he would work hard to maintain the country’s and ethnic unity. He will “resolutely endorse comrade Xi Jinping as the core of the Communist Party, endorse socialism with Chinese characteristics and continue the glorious tradition of Panchen Lama’s in history of loving the country and loving religion”, He will not fail to live up to the expectations of the CCP and contribute to promoting Tibetan Buddhism and socialism.

During his current visit to Tibet, GN presided over the meeting of the 11th council of the Tibet branch of the Chinese Buddhist Association in Lhasa on August 4 and 5, which was also attended by members of United Front Works Department (UFWD). In his keynote address GN said that it is necessary to be grateful to the leadership of CCP, especially Xi Jinping, for his remarkable work in Tibet.

He also urged the Tibetans to resolutely continue fighting against the 14th Dalai Lama and the Dalai’s faction. He also encouraged Tibetans to deeply understand the spirit of the instructions of Xi Jinping and expressed hope for adaptation of Tibetan Buddhism to a socialist society in order to ensure that Tibetan Buddhism always advances in the direction of Sinicization.

GN expressed happiness on the development taking place in different areas under the aegis of Xi Jinping and stated that all should be grateful to the CCP for the development achieved and should follow the party. He stated that Tibetan Buddhism must also be combined with national interests in order to have good development prospects. Norbu’s current tour commenced from his visit to the Tibetan inhabited areas of Sichuan and Gansu province from July 9 -22 and July 23 – 29 respectively. Local Tibetans ignored the visit of Norbu even though they were categorically instructed by authorities to turn out to greet him. However, abbots and monks were forced to greet him.

In the Tibetan tradition, genuine reincarnate lamas are expected to travel widely, study in a range of institutions, and meet with a broad range of lamas to obtain the teachings and

transmissions that are central to their claims to knowledge and religious authenticity. Once they reach adulthood, they are also free to walk away from their religious commitments, as happens relatively frequently outside Tibet. The underlying issues behind this travesty of human rights violations are, of course, political. Chinese authorities want absolute control of the selection of the next Dalai Lama, since the current 14th of that lineage is the unquestioned leader of the Tibetan people.

Due to bad Chinese strategies, GN has neither been able to become a potential leader nor is he revered as a religious leader. He has been reduced to being a puppet of Chinese authorities, who is a prisoner in Beijing most of the time. (IANS)