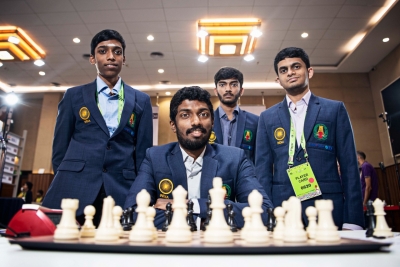 Chennai– It is going to be a no holds barred fight between two Indian teams on Friday at the ongoing 44th Chess Olympiad being held at Mamallapuram near here, said the Indian officials.

There is no question of agreed draws/wins and each player will fight tooth and nail as the medal prospects are open, they added.

India has fielded six teams – three each in the Open and Women’s sections – at the Olympiad.

Both India 1 and India 3 have scored 10 points each at the end of sixth round.

Agreed draws/wins in chess competitions is nothing new and has happened in the past.

One view is that given the strength of its players, the chances of second seeded India 1 team staying at the top and contending for an Olympiad medal are more than the chances of India 3 going up and staying there after drawing/winning against the former.

“India 1 has to win the match tomorrow as splitting the point with India 3 will work against it in the case of a tie-break to decide the medal winners with more than one team scoring identical points,” Ganesh Kumar Rajaram, a chess tournament organiser, told IANS.

Losing to a higher rated player will not majorly affect an India 3 player as the loss can be made up soon.

All the members of India 3 team are rated above 2,600 ELO points and can beat any strong player in the world. The team also has players who have played in the Olympiad.

So, is there a possibility of India 3 team being requested by the officials to allow its opponent to win or sign the peace treaty by splitting the point, is the question.

“None of the All India Chess Federation (AICF) officials will do that now. It might have happened 30 years back when a player would have been asked to split or give away a point to his opponent. But it has not happened during the last 30 years,” chess Grandmaster (GM) Pravin Thipsay, Head of the Indian Delegation at the Olympiad, told IANS.

He also added that the current generation players are not for match fixing and they would fight it out.

Is it possible to do a post mortem of a game and see whether a player – given his ratings and earlier games – actually gave away or split a point?

While anti-cheating laws are there, it is also true it is not possible to prove that beyond a point, chess players said.

A player can be a piece up at one particular point of time. But that doesn’t mean he will win as there are possibilities of him blundering his queen, Thipsay said recalling an incident that happened in a tournament several decades back.

He said an arbiter also cannot decide who will win at a given point of time.

Wondering at the germination of agreed draw/win idea, India 3 team Captain GM Tejas Bakre told IANS: “It will be an all out fight against India 1 team. Our team members will fight for a win.”

“India 1 team can easily win the round on Friday 2.5 points out of 4. Mostly the two teams will play out their games,” a chess official told IANS.

Responding to the strategy to be adopted by his team on Friday, GM Srinath Narayanan, Captain of India 1, told IANS: “The team will play a normal game till the end. There is no pre-agreed result.”

India 1 player GM P. Harikrishna, responding to a question from IANS on the strategy that would be employed while playing against another Indian team, said: “Meeting the other Indian team depends on the pairing. Our focus is on playing the matches and not the teams.”

The pairing has happened now and the match will happen on Friday.