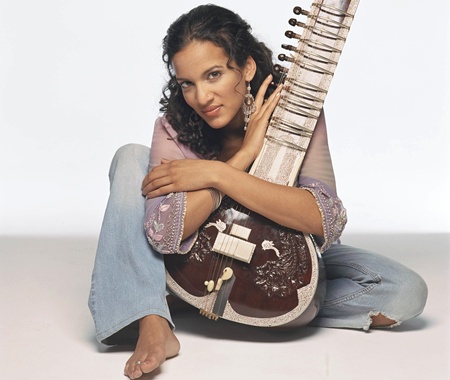 “My music is somewhat like me, eclectic, soulful, feminine and celebratory,” says Anoushka Shankar, one of the best sitar players, composers and daughter of legendary sitarist Ravi Shankar.

Anoushka was born in London into a Bengali-Tamil family. She spent her childhood in London and New Delhi. She is also the paternal half-sister of American singer Norah Jones. As a teenager, she lived in Encinitas, Calif., and attended San Dieguito Academy. She began training at the age of 10 with her famous father and gave her first public performance at the age of 13 at Siri Fort in New Delhi. By the age of 14 she was accompanying her father at concerts around the world and signed her first record contract, with Angel Records (EMI), at 16.

She released her first album “Anoushka” in 1998, followed by “Anourag” in 2000. Both Anoushka and Norah Jones were nominated for Grammy awards in 2003 when Anoushka became the youngest-ever and first woman nominee in the World Music category for her third album “Live at Carnegie Hall.”Her latest album “Traces of You” is receiving rave reviews. She is truly a multifaceted woman with each facet sparkling brilliantly.

In this Chai with Manju feature, Anoushka talks about her ‘gypsy childhood’, her dad, her music, marriage and motherhood. Her simplicity is touching, her frailty very identifiable when she says that her biggest fear is being alone and her peacefulness very inspiring when she says that she believes in ‘Ja Houbar-Tha Hobey’ – Bengali for what ever will be will be.

Shankar
Q: You new album ‘traces of you’ is said to be inspired by 3 men in your life: your dad, husband and son. Can you elaborate on the title and tell us how you got the idea?

Shankar: My album, like all my previous work, is inspired by my life, and is an emotional response to my life experiences. I recently got married, became a mother and lost my father, so certainly these were huge experiences that I was responding to when making this music. However I wouldn’t condense and simplify the album as simply being about these three people: it was about musical dialogue and experimentation, it was about love, change, loss, and hope.

Q: You started learning music from your dad at a very young age and travelled extensively. You also missed college. Any regrets? And When you look back in life would you have done things differently?

Shankar: There’s nothing in my life I would go back and do differently. I had a lot of great opportunities growing up, both personally and musically. I also had a lot of struggles and learned a great deal in overcoming them. I’m very happy with who I am today and feel grateful for the life I live.

Q: How did you meet your husband? What was the first thing that you liked about him that made you decide that you wanted to spend your life with him?

Shankar: Joe and I met in New Delhi at a dinner given by the author William Darlrymple four and a half years ago. We just clicked, I suppose.

Q: You had a son Zubin Shankar Wright in 2011. How has motherhood changed you?

Shankar: It’s making me more patient! It’s changed my priorities, the choices I make and the way I manage my time. It’s brought more laughter and love into my life.

Q: Both you and your husband had relatively ‘gypsy childhood’ with constant traveling. How do you think that it affected you in your life and do you look for more stability for your son?

Shankar: I love how much I traveled as learned through travel as a child and teenager. I had very rich life experiences at a young age and learned how to interact with people from all cultures with ease and comfort. I would love my son to have that as well, but I certainly want to balance that to the best of my ability with a solid base he can call home.

Q: If you were not a musician then what would be your choice of a career?

Shankar: Possibly a writer, a lawyer, or a yoga teacher.

Q: You have written a book about your dad “Bapi: Love of My Life” and were also a weekly columnist for Hindustan Times. Do you have any other plans to write and also do you write a journal daily?

Shankar: I don’t journal daily but I do journal now and then. I love writing and would certainly love more opportunities to do so.

Q: You once said that Mahabharata is one of your favorite books. What are some of the important lessons that you have learnt from it?

Shankar: The concept of purpose and duty, ethics and morality is discussed in great depth throughout the Mahabharata and is very inspiring.

Q: What kind of music do you listen in your spare time?

Shankar: My music tastes are quite eclectic and diverse. I enjoy a wide range from both Indian and Western classical to alternative artists like Bjork, electronica from the Chemical Brothers and world music such as Tinariwem.

Q: You are a strong supporter of women’s causes and also talked about your own experience of sexual abuse as a child by someone that your parents trusted implicitly. Did you have a tough time trusting men and now that you are a mother, how has that influenced you?

Shankar: I feel conscious of a sense of responsibility to society as the mother of a boy. As parents we shape future generations and eradicating violence against women is something that will take a long time indeed and needs deep thinking and commitment from both men and women, not women alone. As a mother I can only pray that I raise a son who sees women as equals, and respects and honors them in his future.

Q: Tell us about your childhood and what is your favorite and happiest memory?

Shankar: My childhood was by turns stable, happy, stressful, nomadic, exciting and bewitching. I have great memories of traveling with my parents and seeing music and dance around the world, watching my father perform, attending dance lessons in Chennai with my mother and going to school in London and California.

Q: What is your schedule like and how do you prepare for a concert? Any special routines?

Shankar: I enjoy my routine before a show as it calms me and helps me prepare. I do a thorough sound check with the band and then spend an hour or so doing stretches and hand warmups, getting dressed and putting on makeup. Just the act of sitting at a makeup table alone can be a nice quiet time to think, before the frenetic activity on stage.

Q: Tell us about your music. What makes it so special and different and what are your plans for future?

Shankar: My music is, I suppose, somewhat like me: eclectic, soulful, feminine, celebratory. I’ve been lucky to receive training in Indian classical music from my father and that in combination with my unusual upbringing and musical tastes make my music quite diverse but with strong roots.

Here are her answers to our rapid fire questions:

1-Who inspires you most:My father

7. Favorite place to perform:Anywhere with a lovely audience

11-Favorite quote: “Ja Houbar, tha houbey” (Bengali for what will be, will be)

(Every life has a story, share it with INDIA New England over “Chai with Manju,” an exciting, innovative and riveting series featuring interviews with some of the most interesting, active, accomplished, amusing and entertaining men and women. Conducting the interviews is Dr. Manju Sheth, a well-known physician at Lahey Health and INDIA New England’s 2011 Woman of the Year. She is also president of Indian Medical Association of New England. Dr. Sheth leads and is involved with numerous professional groups, charities and advocacy organizations, in the Chai with Manju series, she profiles people who have compelling stories to tell. If you or someone you know has a compelling story to tell, you may contact Dr. Sheth at chaiwithmanju@gmail.com or INDIA New England news desk at Editorial@MishraGroup.com.)