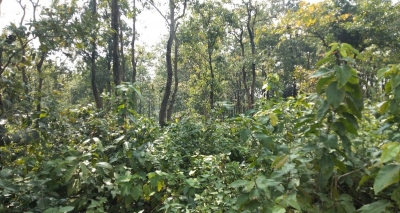 New Delhi– A multi-year study from northeast India has observed a strong link between the hydrological and carbon cycles and established that the carbon removal capacity of the forest in the region may reduce over time.

The study, by a team of scientists from the Indian Institute of Tropical Meteorology (IITM), Pune, an autonomous research institute under the Ministry of Earth Sciences (MoES), and Tezpur University at Tezpur, has investigated carbon movement processes at Assam’s Kaziranga National Park, which is a deciduous forest.

“A multi-year data analysis has shown that the Kaziranga Forest in Assam may not be a carbon sink, which means, annually, it releases more amount of CO2 than it absorbs. The reason for this unusual behaviour lies in the soil. Due to the high bacterial population, the Kaziranga soil emits significant CO2, known as heterotrophic respiration,” a release from the IITM said.

Meteorologists use a sophisticated technique known as Eddy Covariance measurement, which estimates how much carbon is absorbed and released by a forest. Studies carried out by the National Remote Sensing Centre, Hyderabad, in other Indian forests, such as a teak forest in Madhya Pradesh, have shown that those forests act mainly as a carbon sink.

In the case of Kaziranga forest, the scientists observed that it removes maximum carbon from the atmosphere before the monsoon season, typically during March-April-May. During the monsoon season, increased cloud cover limits the photosynthetic activity, hence the plants’ carbon absorption capacity weakens. And in the post-monsoon and winter season, this forest emits a significant amount of carbon. Respiration remains higher than productivity from July to the rest of the year.

“In that sense, the Kaziranga forest is behaving differently,” the release said, adding, a paper – ‘Quantifying the net ecosystem exchange at a semi-deciduous forest in northeast India from intra-seasonal to seasonal time scale’ — has been recently published in an Elsevier journal, Agricultural and Forest Meteorology.

The scientists – under the MetFlux India project sponsored by the Ministry of Earth Sciences in 2015 – have installed a meteorological tower containing a variety of sensors and equipment. One of these sensors placed above the forest canopy measures CO2 and water vapour concentrations; another sensor measures the wind speed and direction. The concentration and wind speed analysis tells how much carbon is absorbed or released by the forest ecosystem. The carbon sequestration capacity of a forest is assessed from one year of measurements.

The IITM scientists also analyzed the isotopic composition of rainwater collected in a few places in northeast India. At Kaziranga, during the pre-monsoon season, when plant productivity is high, they also release a high amount of water, known as transpiration. The transpired water vapour also contributes to rainfall; this is maximum during the pre-monsoon season in Kaziranga forest. At this time, the plant transpired water vapour contains a relatively more number of heavier isotopes than any other season in the year. Through the isotopic and other means of investigation, the IITM scientists observed a strong link between the hydrological and carbon cycles, which may be unique to the Kaziranga ecosystem, the release added.

The changing climatic condition under global warming scenarios is a cause of worry. “Analysis of the rainfall data shows that rainfall in this region has decreased for several decades, especially during the pre-monsoon season. Also, the amount of rainfall derived from the locally generated moisture, through transpiration, is reduced in the March-April season. This is the time an enhanced hydrological cycle triggers the primary productivity and therefore, a reducing trend in rainfall may affect both the ecosystem productivity and the transpiration process,” the scientists said.

“The weakened plant productivity may further affect the carbon sequestration capacity of this fragile ecosystem of northeast India. Over a long-term period, the forest may emit more CO2 into the atmosphere,” were the findings of another paper published in a Nature group journal, npj Climate and Atmospheric Science, titled, “Linkage between precipitation isotopes and biosphere-atmosphere interaction observed in northeast India.” (IANS)