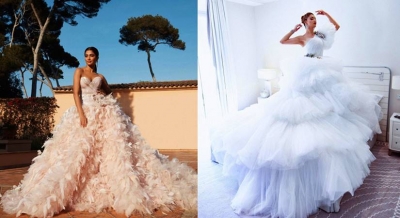 New Delhi– It’s time for the Bollywood celebs’ red carpet looks, where some made their dream debut to the fest, some added more glam to the event, and many simply stole the show with their presence at the 75th Cannes Film Festival.

This year, TV actress Helly Shah made her Cannes Film Festival debut. She styled a green-hued ensemble with a risque thigh-high slit perfectly for the occasion. Helly posted the glamorous photos to her Instagram account with the caption, “Thankful and Grateful Debut at Cannes couldn’t have been a better one … Thank you @lorealparis for making it the PERFECT #festivaldecannes #cannes2022 #cannes.”

On Day 2 of the film festival, Bollywood’s biggest star, Aishwarya Rai Bachchan, turned heads in two different yet majestic looks. The actress wore a pink Valentino pantsuit for the first look and exuded charm. Aish walked the red carpet in a stunning black gown with embellished flower sleeves for the second look.

Pooja looked stunning in a stunning pink sleeveless gown. She wore her hair in a low rise ponytail and added some make-up to steal the show.

Hina Khan’s first look for the 75th Cannes Film Festival wowed everyone. The actress chose a stunning strapless red gown as her outfit of the day. She wore minimal makeup and had a flawless base. Hina captioned the photos she shared, “#cannes2022 #frenchriviera.”

Tamannaah’s Cannes photos went viral, with many social media users praising her appearance. She was dressed in a monochrome black gown with a long trail.

Urvashi Rautela made her Cannes dream debut in a white off-shoulder ruffle gown, and she once again steals the show with her good sense of make-up and looks mesmerising.

Many celebrities, including Kamal Haasan, AR Rahman, Nawazuddin Siddiqui, R Madhavan, and others, were part of the Indian delegation at Cannes 2022, and we must say that these men looked dapper. (IANS)