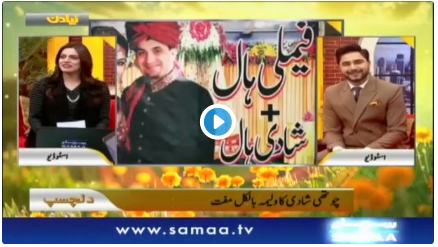 New Delhi–A new wedding hall in Pakistan’s Bahawalpur is offering discounts on bookings for men who are interested in getting married — for a second, third or even fourth time!

The update was reported in a news package carried by a Pakistani news channel — the video clipping of which was posted on Twitter by Naila Inayat.

Bumper wedding offer in Bahawalpur: 50% off on second shaadi, 75% on the third and walima free on the fourth shaadi. Open challenge. pic.twitter.com/6NWSpzjqoy

But this is not the real deal. The deal is that the offer is valid only for those who fulfil a certain condition: a man’s first wife has to visit the hall and make the booking herself for her husband’s second wedding.

The full package of the video was posted on Twitter by Naila Inayat. It was carried as a package by a Pakistani new channel.

“Bumper wedding offer in Bahawalpur: 50% off on second shaadi, 75% on the third and walima free on the fourth shaadi. Open challenge,” she wrote.

So obviously, his tweet went viral, thus, leading to some hilarious jokes, memes and really good sarcasm on Twitter. A user on Twitter wrote: “Pakistan’s population is already bursting at its seams, this offer will allow it to double in no time!”