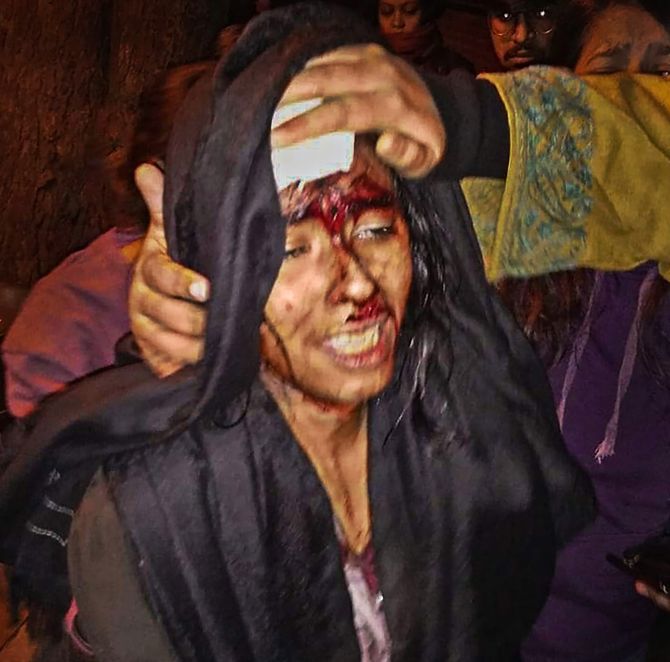 New Delhi–Violence swept the Jawaharlal Nehru University on Sunday as several masked individuals, said to be both male and female, thrashed students, including girls, and teachers inside the varsity campus with wooden and metal rods.

“I have been brutally beaten up by masked people. I don’t know who they were,” Ghosh said as she broke into tears while blood flowed profusely from her head. She has been taken to the AIIMs.

JNUSU Vice President Saket Moon also accused the ABVP of leading the attack, which was bolstered by outsiders.

In a WhatsAap message to the media, Moon said:’ “ABVP has formed a mob of goons from outside the JNU campus. They are going room to room with sticks, stones.”

Hostel rooms, and lobbies were vandalised during the assault while several vehicles standing on roads were damaged by the unidentified miscreants.

There were terrifying moments for students on campus as masked men and even women with faces covered, barged into hostels, ransacked rooms and beat up the frightened students.

A girl student recounted those moments in tears: “I was in the room and I heard loud noises and I saw many girls coming. I asked everyone to lock their rooms. We were in terror. While I was trying to take a video clip, they hit me with a stone.”

On the other hand, the ABVP blamed Left-affiliated students for earlier attack on its activists that had left several injured.

“Around four to five hundred members of the left wing gathered around the Periyar hostel, vandalised the hostel and forcibly entered the hostel to thrash the ABVP activists inside,” ABVP’s JNU unit President Durgesh told IANS.

The ABVP claims its presidential candidate Manish Jangid was injured badly and may have suffered a fractured hand after he was assaulted.

According to intelligence reports and students, the genesis of the clashes began in the confrontation between students seeking to stall the semester registration process as part of their agitation against the hostel fees hike and groups opposing them. Members of the earlier group were allegedly behind the disruption of the varsity’s Wifi network late on Friday.

The JNU administration summoned the police which deployed in the campus and prohibitory orders were imposed.

Union Home Minister Amit Shah ordered the Delhi Police to take all necessary action to control the situation in the campus, and also ordered an inquiry into the matter.

“Union Home Minister has spoken to Delhi Police Commissioner over JNU violence and instructed him to take necessary action. Hon’ble minister has also ordered an enquiry to be carried out by a Joint CP level officer and asked for a report to be submitted as soon as possible,” the Home Ministry said in a tweet.

The violence was condemned by leaders across the political spectrum.

“Horrifying images from JNU- the place I know and remember was one for fierce debates and opinions but never violence. I unequivocally condemn the events of today. This government, regardless of what has been said the past few weeks, wants universities to be safe spaces for all students,” Sitharaman, who did her MPhil from JNU, said in a tweet.

Jaishankar, who has an MA in Political Science and an MPhil and PhD in International Relations from JNU, also took to Twitter to express his reaction.

“Have seen pictures of what is happening in JNU. Condemn the violence unequivocally. This is completely against the tradition and culture of the university,” he tweeted.

“The brutal attack on JNU students & teachers by masked thugs, that has left many seriously injured, is shocking. The fascists in control of our nation, are afraid of the voices of our brave students. Today’s violence in JNU is a reflection of that fear. #SOSJNU,” he said, in a tweet.

Jamia students reached the Delhi Police HQ at ITO to protest, while the Jadavpur University Teachers’Association called upon all sections of society to condemn the “heinous act”.