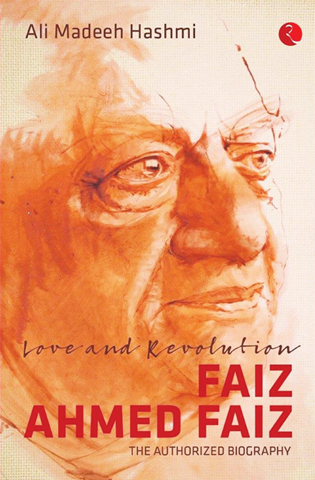 We can make out a poet’s capabilities and worldview by his verse but does it tell us anything about his nature? For Faiz Ahmed ‘Faiz’, his couplet: “Maqaam ‘Faiz’ koi raah mein jacha hi nahi/Jo kuu-e-yaar se nikle to suu-e-daar chale” could sum up his poetry, spanning the seemingly disparate realms of romance and revolution (though both demand passion) but was he as intensely fiery as his words?

No for the first and both for the second and third, as we find from this biography. Out of us, poets display the most duality in thought, deed and temperament and Faiz (1911-84), among the foremost poets of revolution in Urdu, was actually soft-spoken, reticent, reluctant to express his views outside his verse, and an avowed Marxist without forsaking his Islamic faith, says its author, his eldest grandson.

When Faiz’s first collection of poetry was published in 1941, a critic opined that “the Ghazal is not bad. It is balanced, eloquent, and, unlike Faiz himself, the verses actually say something”, he writes.

The son of Faiz’s second and younger daughter Moneeza and a psychiatrist by profession, Hashmi draws upon memories of family and friends as well as extensively from published — but scattered — sources to depict his grandfather in all his facets, but above all as a person.

Admitting the idea of writing a biography about his grandfather, who had been a “towering (in some ways an overwhelming) presence in our lives”, he says that embarking on this venture would also give “me a chance to get into his mind and understand him from the inside (which, as a psychiatrist, I’m interested in)”.

Hashmi also notes he “made a deliberate effort while writing the book to avoid making a family connection and keep myself ‘out of the action'”, so as to speak, for several reasons, including for the book “to be judged on its own merit and not a product of someone related to Faiz”.

And he delivers on his promise despite relying on the family for much the inside story.

Admitting he does not have many personal memories, he begins his account with some that do exist vividly — and traumatically: of Faiz’s last days in November 1984. From there, he goes to the 19th century to chronicle the singular career of Faiz’s father, Sultan Muhammad Khan, who was an adviser to the Emir of Afghanistan, and later his envoy in London.

We then follow Faiz through his childhood, education, and careers literary and occupational, with special focus on emotionally significant events like the death of his father when he was still studying, and a brother — just before he was due to come and meet Faiz in prison, and his romances.

Then there is his experiences as a colonel in the British Indian Army during World War II, and then of Independence and Partition, which inspired one of his best works – “Subh-e-Azaadi”, questioning their costs — his supposed involvement in the Rawalpindi Conspiracy Case, which earned him a long jail term, the attitude of succeeding governments, both military and civil, towards him in the subsequent three decades, his foreign visits, including his “exile”, and final years.

Apart from also providing a context for some of Faiz’s most famous works (though “Ham Dekhenge” is absent), there are a host of interesting snippets — Sheikh Abdullah performed his Nikah, among his preferred reading in jail was Sarvepalli Radhakrishna’s magisterial “Indian Philosophy”, one of his celebrated ghazals came on a request by Sheikh Mujibur Rehman and much more.

A must for all fans of Faiz, Hashmi’s book also offers an enticing look at the subcontinent before and after 1947 through a poet’s viewpoint, which makes it all the more irresistible. (IANS)