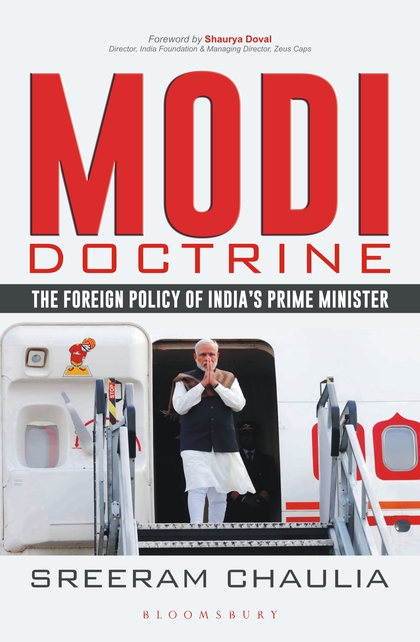 This is a path-breaking work on India’s foreign policy since Narendra Modi became the Prime Minister in May 2014 and surprised everyone by taking virtual charge of the external affairs portfolio. A man who had been denied visa by some countries began globetrotting with a vengeance. In the process, Modi put his personal stamp on a subject in a manner no Prime Minister had done since Jawaharlal Nehru.

Sreeram Chaulia, a scholar on foreign affairs who teaches at the O.P. Jindal Global University, is clearly in awe of Modi. Calling him a force of nature, Chaulia dwells into the “alert mind and hands-on style of active leadership” of the RSS pracharak-turned-BJP-politician who feels that the time has finally come for India to shine on the global stage.

Chaulia finds Modi imbuing Indian foreign policy with doctrinal purpose. By the end of the first year in office, he had visited 18 countries – an all-time high in independent India. As of July 2016, Modi had covered 42 countries. “Such farsightedness, organizational and planning insight was totally lacking before Modi came to power.” As far as Chaulia is concerned, ambiguity and confusion were the default answers before Modi arrived on the scene. Modi is seen as one who is slowly correcting decades-long strategic laziness and putting India’s priorities on the right track.

The Modi doctrine is said to be much more comprehensive, both a mirror to and a motor of India’s amplified footprint in international affairs, include a military dimension, and becoming more integral to India’s historically civilian-dominated foreign policy matrix. The central tenet of this doctrine is the overriding goal that India must become an acknowledged great power. And Chaulia feels that Modi’s personality traits augur well for a revolution in foreign policy.

Already, Modi’s India – Chaulia says – is doing better and is emerging stronger in the eyes of the international community. It comes with Modi’s own inimitable characteristics, style and personality – a leader who is unabashedly Hindu. Modi’s showmanship is aimed at earning laurels for India’s soft power. And while basically supportive of the Modi doctrine, this book also recommends course corrections in specific areas.

But the Modi doctrine is no neo-liberal manifesto, Chaulia tells us. The author also sees Modi, despite his innate love for Washington, drawing red lines the US cannot cross in undermining India’s strategic autonomy and national interests. The Modi doctrine has also evolved a carrot-and-stick strategy on China, one country the Prime Minister is wary of.

I wish Chaulia had been less effusive of Modi – and less critical of the Manmohan Singh decade. Modi can afford to do what he wants because of the majority he enjoys in the Lok Sabha, a luxury Manmohan Singh lacked and so found himself fettered even on some foreign policy issues. But as the recent debate on the army’s surgical strikes showed, previous governments didn’t lack aggression but chose to be quiet unlike Modi.

Chaulia praises Modi – “running India like a CEO” — for his spirit of “competitive federalism” and notes how the Prime Minister uses Indian democracy as a tool to spread New Delhi’s influence. More and more people increasingly feel that on both counts, Modi may actually be losing brownie points both domestically and abroad. The manner the Modi government has tried to throttle the AAP government in Delhi and the way the electronic media has been pushed into glorifying Modi while showing those ranged against the BJP in the worst possible light is a blot on democracy. Chaulia prays that Modi must remain in power for a decade at least; if that has to happen, the Prime Minister must genuinely become accommodative, a la Vajpayee, towards others in politics. (IANS)