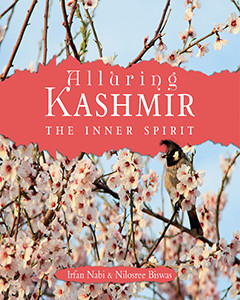 New Delhi– Amid the myriad discordant voices on Kashmir, just when it seemed there is no end to the ongoing madness, comes a superbly illustrated book that is a pleasant reminder that paradise is not entirely lost. In fact, it’s alive and thriving — thanks to the resilience of the people despite nearly three decades of a bruising militancy.

“Alluring Kashmir: The Inner Spirit” (Niyogi Books/pp 348/Es 1,995) “is essentially a book of beautiful photographs supported by an informative yet lucid travel narrative, attempting to touch a few vital chords of life’s quiet music that plays in the Valley against the backdrop of nature’s plentiful wonders”, co-author Nilosree Biswas, who also wears the hat of a filmmaker and spent four years researching the book, says in the introduction.

“I see it as a book replica of a lovely trinket box filled with beautiful jewellery — the photographs with their subtle, delicate hues and a classic, eternal appeal… it is a slice of the traditional and quiet undercurrent of daily life that flows through the sylvan woods and grassy meadows of the Valley, much like its numerous rivers and streams,” Biswas writes.

“This book is an attempt to admire the inner spirit and strength of people, which is a constant feature of their lives,” co-author Irfan Nabi, who took the photographs between 2013 and 2016, told IANS in an email interview from Mumbai.

“The turmoil in the Valley started when I was a teenager. Since then, nearly three decades have passed. Through these many challenging and distressing phases, one thing has remained a constant which is the resilience of the people who despite the most crippling situations carry on with life, giving it their best,” Nabi added.

And how wonderously this comes across:

A rare shot of three generations of farmers, a fisherman with a hookah in one hand and a rod in the other as his wife looks on, two generations of visitors feeding the pigeons in a mosque courtyard, a waza (master chef) monitoring multiple dishes, farmers sorting and packing apples in an orchard with one holding the ubiquitous hookah gazing curiously at the camera, a fisherman’s family halting for a round of “nuun chai” (salted tea) on a quiet evening on the banks of the Dal Lake while mist descends on the distant Char Chinar and ducks and geese waddle down the slope, a conversation between two friends on one of the terraces of Nishat Bagh against the backdrop of the Dal Lake to create a timeless moment… one could just go on and on.

How then, did the book come about?

Noting that she had travelled to Kashmir for her documentaries for over a decade, Biswas told IANS: “The many trips made me soak the essence of the place. I realised there are far too many aspects of Kashmir that I was drawn to and thus films were not the outcome for each of them. This book is my attempt to include a larger image of Kashmir to all who love the place but may not be interested in knowing Kashmir only through the reel route.”

How did the collaboration start?

“During the pre-production of my documentary “Broken Memory Shining Dust”, I had briefly interacted with Irfan while trying to find some complicated leads. I liked his take on Kashmir and it’s layered nuances and had expressed my interest to extend my work over other formats. That’s when I thought Irfan and I could collaborate.”

To which, Nabi added: “Been born and grown up in Kashmir, I have always been interested in the daily lives of people, the cultural aspects, and wanted many times to document them. The famed landscape was never my primary trigger for the book.”

Even so, the book has quite a few such images:

Top shots of the Verinag and Mujhpather valleys, the rushing Lidder river on a cloudy summer morning, snowfall making the terraced structure of the Pari Mahal come alive… and more.

Were there any defining moments during the research?

“My visits to Kashmir brought me in contact with many, both locals and visitors like me. In those encounters I remember this elderly Japanese couple who had deeply bonded with Kashmir over their purchase of a carpet decades back which later had become more than a mere buy. It was absolutely amazing to see how people connected with a faraway land and even ventured out in search of a long-lost ‘friend’ leaving their comfort zone, in this case the carpet seller from Kashmir,” Biswas explained.

Nabi’s take: “The ever-changing scenario and unpredictable weather was a challenge but being persistent and determined with photographing moments from most parts of Kashmir over a period of three years was an enriching experience. A brief discussion with locals explaining the concept of the book and these strangers-turned-friends were happy sharing snippets of their lives without which photographing the book would be impossible.”

Amen. “Alluring Kashmir…” is a signal service to the nation! (IANS)