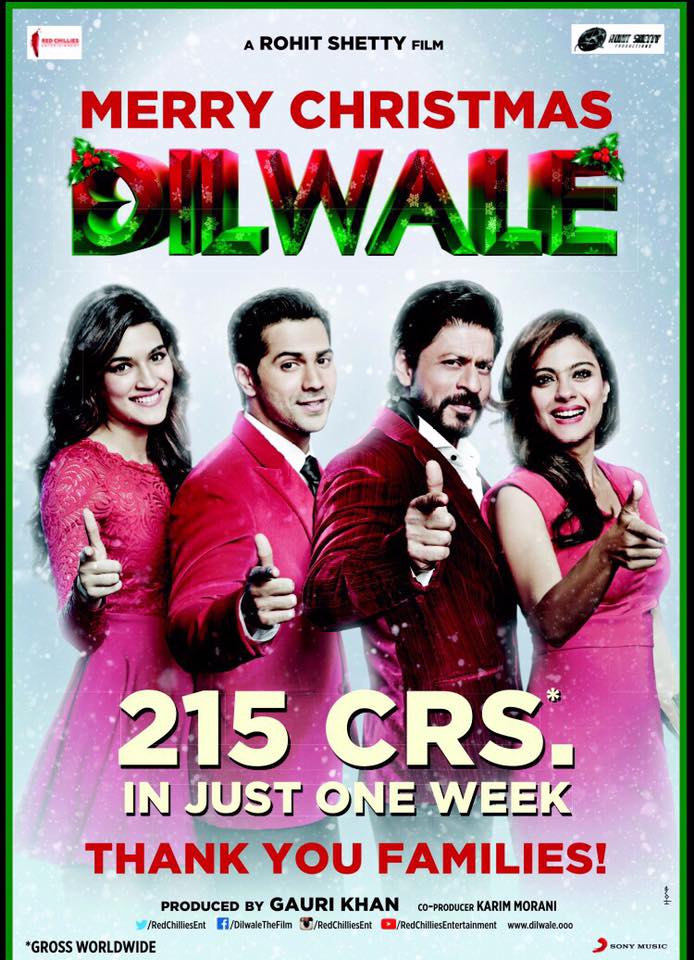 By Sandeep Sharma and Uma Ramasubramanian

NEW DELHI– Star power sells, but content is the original king. This stood true for Bollywood’s roaster-coaster 2015, a year full of films with strong and unique storylines making their small presence felt in a big way.

The stars, barring Salman Khan, somehow failed to rake in much moolah, say trade pundits, pointing out how only six of the nearly 172 Hindi film releases surpassed the psychological Rs.100 crore ($15 million) mark at the domestic box office. And this duly included Shah Rukh Khan’s “Dilwale” and historic Bajirao Mastani.

One can’t say the year has been “bad” for Bollywood, says trade analyst Taran Adarsh.

“It has been a trend since the past so many years now that we have had more flops and lesser hits. So you really can’t say that the year has been a bad one. When big films fail, it is very upsetting and really bad for the industry,” Adarsh told IANS.

A pleasant change however was the welcome to movies like “Baby”, “Dum Laga Ke Haisha”, “NH10” and “Piku”; as well as to some formulaic entertainers like “Drishyam”, “Welcome Back”, “Kis Kisko Pyaar Karoon”, “Singh Is Bliing” and “Pyaar Ka Punchnama 2”.

“The year has witnessed a diverse set of films. People chose content that touched their heart and which they could carry home after getting out of the theatres,” Adarsh explained.

Rucha Pathak, chief creative officer at Fox Star Studios, agreed that “2015 has been a great year in terms of content, not only for small films, but also for big films. The biggest example of power of good content is ‘Bajrangi Bhaijaan’. Even some of the smaller films really garnered good word of mouth from the audience.”

But, in terms of the number of hits, 2015 was way ahead of last year, said Delhi-based film distributor Joginder Mahajan.

“This year has been good, especially for multiplexes. The last six, seven months have been great. It was not so good for single screen owners, as most of the films were made keeping in mind the multiplex audience.

“Their (multiplex) owners have seen a growth of 25 percent in footfalls in comparison to 2014. However, single screens have seen a decline of 12 to 15 percent,” Mahajan told IANS.

What came as a surprise packet this year was southern magnum opus “Bahubaali: The Beginning”, whose Hindi version itself collected over Rs.100 crore.

“This is the first time that a dubbed film (‘Baahubali: The Beginning’) has done really well. It’s good to see that,” film expert Vinod Mirani told IANS.

He also pointed out that “these days, budgets of films have become unreasonably high and this is not viable”.

“Today you make a film for Rs.130 crore to Rs.140 crore and then expect it to collect over Rs.300 crore and recover all the money. That really doesn’t happen,” he said.

Another interesting factor witnessed in 2015 was how big actors like Akshay Kumar and Ranbir Kapoor, who had three to four releases this year, couldn’t shine as much as actresses like Deepika Padukone and Kangana Ranaut.

“Women came into their own in 2015. If there’s one very good trend in 2015 apart from the strong scripts making their impact at the box office, it’s that women have proved to be the successful risk-takers and have been doing some amazing work in the movies this year,” said Pathak.

* Overall, a mixed response for films released in 2015.

* Content ruled the box office even when it came out of films without big stars and big budget.