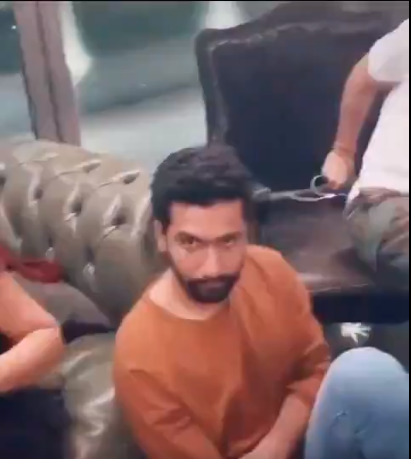 New Delhi–Akali Dal MLA Manjinder S. Sirsa literally kicked the hornets nest on Wednesday when he shared on social media a video from a party at filmmaker Karan Johars residence, where several from Bollywoods A-list are seen in what the politician feels was definitely a state of drug-induced high.

For the record, Deepika Padukone, Shahid Kapoor, Vicky Kaushal, Ranbir Kapoor, Arjun Kapoor, and Malaika Arora were among the stars spotted at the party, duly attested in the video, originally posted by host K.Jo himself, and snazzily caption “Saturday night vibes”.

#AkaliDal MLA #ManjinderSinghSirsa literally kicked the hornets nest when he shared on #socialmedia a video from a party at filmmaker #KaranJohar's residence, where several from #Bollywoods A-list are seen in what the politician feels was definitely a state of #drug-induced high. pic.twitter.com/EDpZ5BBheb

So far, Sirsa’s allegations that top stars as Deepika Padukone and Shahid Kapoor were flaunting a “drugged state” at the party, thereby setting a bad example as public figures, has not been erfuted by anyone who was present at the party. Most among B-Town’s creme de la creme are maintaining a studied silence over the issue. The ones who have come out and spoken don’t seem very surprised. Drugs and Bollywood, most of them aver, go a long way. In fact, B-Town’s high way to hell is one of the primarily things that define the grime beneath the glitz.

“It was okay till egaanja’ was the in-thing, nowadays the industry maxim is if you don’t do coke, you ain’t cool,” says rapper Hard Kaur, adding: “Doing drugs has become a showoff factor. Cocaine, after all, is an expensive drug.”

Kaur states she is talking about “almost everybody I know… just everywhere”, and it includes “women and men”, she adds. “It’s like a gang versus gang thing. The ones that stay together snort together.”

Kaur also points out that many stars feel their fame gives them the licence to do drugs.

“It’s almost like I can do what I want (because) I am a star. Apparently, you are supposed to have a esex, drugs and rock n’ roll’ lifestyle. I’m not a perfect person e you have seen me under the influence of alcohol, but I’m constantly aware of actors and models indulge in these things. Everyone does it,” she adds.

Veejay Nikhil Chinapa doesn’t deny the use of drugs is rampant in the film and music industries, but feels it is wrong to only single out these communities.

“The issue of drugs is a social problem. It is not connected to only the music of film industries. People from the world of sports also have a drug problems. In fact, the world of sports has a big problem with drugs. From what I have read, the major issue with drugs does not concern illegal drugs as much as it concerns pharmacy drugs. People are addicted to painkillers and cough syrups. That is the bigger issue you should talk of. People who take drugs don’t come from a specifis sphere of life, and it doesn’t matter whether you are rich or poor, sportsmen or industrialist, music or actor or entrepreneur,” feels Chinapa.

Chinapa has a point, but it does not obliterate the fact that stars are role models for youngsters who blindly worship them. When a video featuring some of Bollywood’s biggest names in various states of drug-induced high becomes viral, the damage on impressionable minds cannot be ignored.

Bollywood’s connection with drugs, after all, is nothing new. For decades now, whispers have done the rounds about how top quality substance is made available at super exclusive parties, privy to select guests. Gossip magazines have often cautiously tossed names such as Fardeen Khan, Prateik Babbar, Vijay Raaz and Mamta Kulkarni as actors who have been involved in drug scandals, although names of superstars are hardly ever mentioned. Everyone, however knowns, every major celebrity in B-Town is doing it. It’s just that only Sanjay Dutt’s name has come out in the open in this context, thanks to the actor’s biopic, “Sanju”, which elaborately depicted his drug phase.

Image is something that bars Indian filmstars from being honest about these things, most stars would tell you. A star son who had one of the most promising debuts in recent times in 2010 only to subsequently fade away after a self-confessed brush with drug abuse, is not surprised at the latest incident at Johar’s house.

These things, he points out on condition of anonymity, keep happening in Bollywood. “Drugs and Bollywood have a long standing connection. It was more underground and discreet earlier, but today it is increasingly becoming more rampant. It has almost become a necessity. At this rate, we will see OD deaths among Indian celebrities too, as it happens in the West,” he says.

Model-actor Rajneesh Duggall feels the increasingly easy availability of drugs is more threatening than reports of celebrities caught in such incidents. “Drugs are available everywhere. It is up to the individual to indulge in such habits. Drug abuse is not profession-based. It is a personal choice, and everyone from stars to cners should keep in mind that if it is banned, it shouldn’t be done,” says Duggall.

“Like all over the world, drugs are easily available in Bombay, too. But actors should be careful about what they put out on social media. People consider celebrities their idols, so they should set good examples,” he says, about the video finding its way into cyber space.

Celebrities may be defensive about their ilk, saying the drug menace is all-pervasive in society and not restricted to Bollywood, but most professionals associated with the industry would tell you drugs have always been a way of life for the partying set.

“You cannot have private parties in Bollywood without drugs, anyone in the industry knows. I can recall the parties hosted by a Bollywood couple that has since then separated. Drugs would be spread out on a large table and the binging would start. They’d arrange for a wide variety of drugs, and the wives and girlfriends would be part of the merriment, too. I know of several television producers, too, who had their own gangs for exclusive parties,” says the owner of a Mumbai-based talent management firm, not wishing to be named.

“Cocaine rules these days, although smoking pot is also common, so are weed and hash. I see it all the time, at Bollywood’s high-end parties,” avers the founder of a PR firm, on grounds of anonymity.

“This is nothing new. Drugs at Bollywood parties have been going on for ages. Roll it, snort it, do it and forget it e that’s the mantra,” the PR pro sums it up.