Vidya Balan is having ‘pure joy’ on her Bali trip

Bali– Actress Vidya Balan is giving vacation goals by sharing glimpses of her holiday in Bali.

Vidya on Tuesday took to Instagram and uploaded a few photographs of herself posing against the backdrop of serene beaches.

“Alive, happy…Fun in the sun…Pure joy,” the “Parineeta” actress captioned the images in which she is seen giving a wide laugh while playing with the waves.

For the beach look, Vidya wore a maroon printed dress sported with a pair of sunglasses.

Actress Sonakshi Sinha commented: “Why didn’t you take me with you?”, while Priyanka Chopra wrote :”Stunner”.

On the work front, Vidya will next be seen on-screen in “Mission Mangal”.

When Archana was nervous to kiss Anupam Kher in ‘Ladaai’

Mumbai– Actors Anupam Kher and Archana Puran Singh, who entertained the audience with their chemistry as Mister Malhotra and Miss Braganza in “Kuch Kuch Hota Hai”, shared an anecdote about a kissing scene they were supposed to do in their 1989 movie “Ladaai”.

During an upcoming episode of Sony Entertainment Television’s “The Kapil Sharma Show”, Archana opened up about why she refused to kiss Anupam on-screen, and how she was moved by Anupam’s gesture when he convinced the film’s director Deepak Shivdasani to delete that sequence, read a statement from the channel.

Archana recounted: “When we were shooting for the film ‘Ladaai’, Deepak planned a kissing sequence between me and Anupam. When I got to know this, I was nervous as I’d never done an on-screen kissing scene before.

“I called Deepak and informed him that I won’t be able to do it, but then I don’t know what made Deepak remove the sequence completely.”

On the show, Archana asked Anupam if he feared kissing her considering he was married to Kirron Kher?

To this , Anupam responded: “I wasn’t fearing Kirron… but considering you weren’t comfortable doing so, I requested Deepakji to remove it completely.”

Anupam appeared on Kapil’s show along with actress Esha Gupta to promote his forthcoming film “One Day: Justice Delivered”

Mumbai– Actress Jacqueline Fernandez, who is currently enjoying a vacation with her sister, slipped into a pink swimsuit with ‘Barbie’ written across it.

The actress took to Instagram to share multiple photographs of herself while holidaying with her sister at a beach destination. In one image, Jacqueline is seen flaunting a bright pink swimsuit that has Barbie written on it with white.

She completed her vacay look with sunglasses and a high ponytail.

In another photograph, she is on a yacht and looks pretty in a floral dress.

She captioned the images: “Happy birthday to my sissy poo Geri! To always being nature babies, working on our bikini bodies but also never giving up on our coffee and croissants in the morning, wearing sunscreen (always) and dancing like funny man in his thong! I love you.”

On the work front, Jacqueline will be seen making her digital debut with Netflix’s “Mrs. Serial Killer”.

Ekta explains use of ‘wrong’ rocket in ‘MOM’ poster

Mumbai– The poster of producer Ekta Kapoor’s upcoming web series “M.O.M. – Mission Over Mars” has been trolled by some netizens for using the wrong rocket. She says her team cannot use the Indian Space Research Organisation (ISRO) rocket for representation due to legal boundaries.

On her birthday on June 7, Ekta had unveiled the show’s poster and written that she had decided to make the project two-and-half years ago when she chanced upon the “amazing story about women in Indian science”.

“This show is on the women who sent the mission to Mars — partly fictional keeping in mind the sacrosanct nature of ISRO,” she had written.

Soon, some netizens pointed out the use of the wrong rocket in its poster.

In a statement ALTBalaji’s spokesperson said, “Our upcoming show is a fictional adaptation of the real life heroes at ISRO who worked on Mangalyaan and set a major milestone putting India firmly on the global map. However, as a strategic call taken by multiple parties, we have gone down the fiction route for this show.

“Additionally, we are legally bound not to use actual names or images of either the people, objects or agencies involved. Keeping in mind our contractual obligations, publicity material of the show was designed,” said the spokesperson.

Mars Orbiter Mission (MOM), the maiden interplanetary mission of ISRO, launched on November 5, 2013, entered the Martian orbit on September 24, 2014 in its first attempt.

Mumbai– Actor Ranveer Singh has shared the story of “reel and real” life along with actress Deepika Padukone, who will be seen playing his wife in the upcoming film “83”. 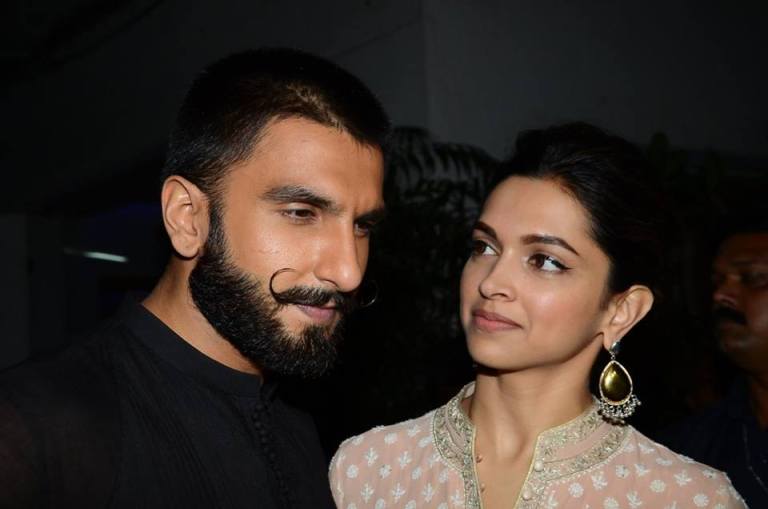 Ranveer on Tuesday posted a photograph of himself along with his wife Deepika and director Kabir Khan. He captioned the image: “Who better to play my wifey than my wifey? Deepika Padukone plays Romi Dev in ’83’! Genius casting courtesy Kabir Khan.”

The movie will trace India’s historic victory at the 1983 cricket World Cup. Ranveer Singh will be playing the role of former Indian skipper Kapil Dev and Deepika will essay his wife Romi.

The “Gully Boy” star then shared a boomerang video of himself along with Deepika on Twitter.

“Story of my life… Real and reel,” he wrote.

This will be the first time Ranveer and Deepika will be seen featuring together in a film after their wedding. The star couple have previously worked in films like “Padmaavat”, “Bajirao Mastani” and “Goliyon Ki Rasleela Ram-Leela”.

“83” is being presented by Reliance Entertainment, and will release on April 10, 2020, in Hindi, Tamil and Telugu.

Priyanka, a global Unicef Goodwill Ambassador for Child Rights, took to Twitter and wrote: “So humbled. Thank you Unicef for honouring me with the Danny Kaye Humanitarian Award at the Unicef Snowflake Ball in December.”

The event will be held on December 3 in New York.

The 36-year-old says her work for Unicef means everything to her.

“My work with Unicef on behalf of all the world’s children means everything to me. Here’s to peace, freedom and the right to education,” she added.

Priyanka has worked with Unicef since 2006 and was appointed the national and global Unicef Goodwill Ambassador for Child Rights in 2010 and 2016, respectively. She promotes various causes such as environment, health and education, and women’s rights and is particularly vocal about gender equality and feminism.

On the acting front, the “Isn’t It Romantic” actress has wrapped up shooting for Shonali Bose’s “The Sky Is Pink” with Farhan Akhtar.

Mumbai– Actress Sonakshi Sinha’s upcoming film with actor Varun Sharma and rapper Badshah, has finally got a title and release date. Directed by Shilpi Dasgupta, the film is titled “Khandaani Shafakhana”, and is scheduled to release on July 26.

Based in Hoshiarpur, the film features Sonakshi as a happy-go-lucky Punjabi girl who adores her family and will go to any length to see them happy even if it means not living her dreams.

On her role, Sonakshi had earlier said: “I am extremely happy to be part of this film which is so close to the world around us, to step into the shoes of a small town girl, and face the hilarious, madcap challenges thrown at her. Full of flavour, fun and emotions.”

Apart from “Khandaani Shafakhana”, Sonakshi has projects like “Dabangg 3” and “Mission Mangal” in her kitty. (IANS)