Mumbai– Model-turned-actress Urvashi Rautela recalls completing five years of winning a beauty pageant, and promises to uplift the spirit of young girls and empower women by raising her voice on issues that matter.

“I feel eternally blessed and grateful to become the only girl in history to win the prestigious Miss Universe India title twice! & creating a world record First in 2012 and then again in 2015, My life completely changed and I think it was a night of dreams coming true! Personally, I think it takes bravery to be that and to carry that prestigious torch and illuminate the lives of many. I would dedicate my whole self and my love to the arts, and my voice to try and uplift, empower and educate the people, especially women. It has been my greatest honour and duty to hold this torch high enough to have the entire universe gleam in its light,” said Urvashi.

The actress was last seen in the film “Virgin Bhanupriya” and in the music video “Woh chaand kaha se laogi”. While on one hand she is gearing up for the release of her next music video “Teri load ve”, she has also finished shooting the bilingual thriller “Black Rose”. The film will be released in Telugu and Hindi.

Ayushmann Khurrana on why ‘Chandigarh Kare Aashiqui’ is a special film

Mumbai– Actor Ayushmann Khurrana says he is proud that his upcoming project, Chandigarh Kare Aashiqui, has become the first mainstream film in India to wrap up shooting amid the Covid pandemic. The love story directed by Abhishek Kapoor has been shot in Chandigarh over just 48 days, amid the pandemic.

“Today, I feel immensely proud that our film is the first one in India to finish shooting an entire film while battling the coronavirus,” Ayushmann wrote in Instagram along with a few pictures with co-star Vaani Kapoor and the director as they celebrated the moment.

“I have to credit my director and producer Abhishek Kapoor and Pragya Kapoor for manning the resources so diligently and so effectively. It feels amazing that we managed this feat in my hometown Chandigarh – couldn’t be prouder!!! ‘Chandigarh Kare Aashiqui’ is a very special film for me and I can’t wait to share it with the world in cinemas next year,” he added.

Meanwhile, Ayushmann has announced his next film, a campus comedy drama titled Doctor G. The film will be directed by Anubhuti Kashyap.

Anil Kapoor: Like to believe that my father lives on in me

Mumbai– Bollywood star Anil Kapoor has penned a note in memory of his father, late producer Surinder Kapoor, on his birth anniversary, saying he continues to live on in his mind and heart.

“I like to believe that my father lives on in me. In the lessons he taught us, in the love he showered on us, but most importantly in the values I believe in, that I recognise as his — loyalty, honesty, humility, empathy,” Anil wrote.

He continued: “Even in that day and age, he trusted his children to find their own voice and their own way, never dictating the direction of their lives or careers. We faltered, we fumbled, we picked ourselves up and brushed the dirt off, never giving up the search for our destinies. What he gave us is what I have always tried to give our children – faith in the power of goodness, dedication to honest hard work and the courage to weather the storms of their lives.”

“Thank you Papa for the memories and the lessons. You live on in our minds and our hearts, today and always,” he concluded.

The actor is currently shooting for “Jug Jugg Jeeyo” in Chandigarh. The film is directed by Raj Mehta, and also stars Varun Dhawan, Neetu Kapoor and Kiara Advani.

Mumbai– Actress Kangana Ranaut went down memory lane and recalled the time she spent in Mexico. 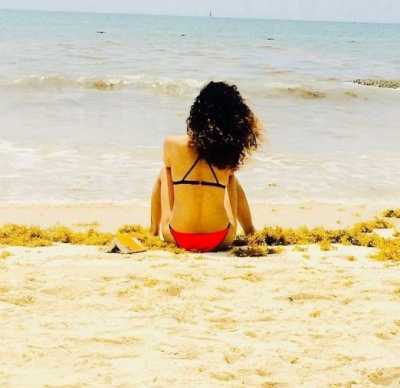 Kangana posted a picture on Instagram, sitting on a beach with her back towards the camera. In the photo, she sports a tiny bikini and has left her curly hair open.

“Good morning friends, one of the most exciting places that I visited in my life is Mexico, beautiful but an unpredictable place, here’s a picture from Tulum a little island in Mexico,” she wrote alongside the image, which currently has 539K likes on the photo-sharing website.

Kangana is currently gearing up for “Thalaivi”, the upcoming bilingual biopic of late Jayalalithaa in Hindi and Tamil.

The film will trace the journey of the late leader from silver screen to politics. It is directed by AL Vijay, and also stars Arvind Swami, Prakash Raj, Madhoo and Bhagyashree.

Mumbai– Actress Rakul Preet Singh has garnered a fan following of 16 million on Instagram. She thanked her fans for all the love.

Rakul posted a clip on Instagram, celebrating her 16 million following.

“And we turn SWEET 16 !! cannot thank you all enough for all the love and support… here is to making sure I give my best every day to never disappoint you. Promise to keep working hard . Lots and lots of love to each one of you. stay safe,” she wrote as caption.

Rakul on Tuesday had tweeted on her verified account that she has tested positive for Covid-19. She added that she has quarantined herself.

The actress had just started shooting for the film “Mayday”. She stars alongside Amitabh Bachchan and Ajay Devgn in the thriller drama. The film is directed and produced by Ajay Devgn. (IANS)