Tisca Chopra: Frida Kahlo continues to inspire me in so many ways

“It was Ms Frida Kahlo’s 114th birthday yesterday.. I count the years and what I wouldn’t have done to meet her,” Tisca wrote.

She added: “#FridaKahlo continues to inspire me in so many ways.. her existential search for identity, her toughness and joie de vivre in the face of pain and heartbreak…But beyond it all is her absolute defiance in letting her gender define her identity, her fluidity with her sexualityï¿½ Such is my #Fridamania that I had to have this #Frida sari,” Tisca wrote as the caption.

Tisca came out with her book “What’s Up With Me?” in March. She was last seen on the big screen in the 2019 film “Good Newwz”.

Taapsee Pannu: There is no industry without competition, stress today

New Delhi– Actress Taapsee Pannu says there is no industry without competition and stress today.

Talking about life in Bollywood being fastpaced and how it takes a toll, Taapsee tells IANS: “It is a very competitive industry, just like other industries. Just that our competition comes in front of the camera for the world to judge. So, it becomes slightly more stressful, but everyone knows about it when they get into it.”

She agrees it is a part and parcel of an actor’s life.

“It’s not like somebody forced us into it. We were aware of the fact that we will be in front of the camera and people would want to know more and more about us, so we were aware of that when we entered. So, something in return of that unconditional love we get from the audience is a price we pay. That attracts stress and it’s a part of every competitive industry,” the actress said.

“There is competition in every industry. There is no industry without competition and stress today,” summed up Taapsee, whose latest film “Haseen Dillruba” released on Netflix recently.

Mumbai– Amitabh Bachchan has mourned the death of Dilip Kumar, who passed away aged 98 on Wednesday early morning in a hospital here.

Bachchan paid his tribute to the “institution” on Twitter.

He wrote: “An institution has gone.. whenever the history of Indian Cinema will be written, it shall always be ‘before Dilip Kumar, and after Dilip Kumar’.. My duas for peace of his soul and the strength to the family to bear this loss.. Deeply saddened..”

“An epic era has drawn curtains… Never to happen again,” he added.

Dilip Kumar and Amitabh Bachchan co-starred in the 1982 film “Shakti”.

Dilip Kumar breathed his last on Wednesday morning due to age-related illness. He was 98, and he died at Hinduja Hospital where he had been admitted for breathing issues.

The thespian’s close aide and family friend told IANS: “He passed away peacefully this morning in the presence of Saira Ji and other family members and doctors.” 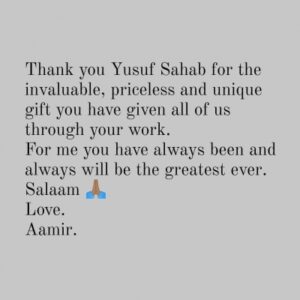 Dilip Kumar, 98, passed away in a Mumbai hospital early morning the same day.

“Thank you Yusuf Sahab for the invaluable, priceless and unique gift you have given all of us through your work. For me you have always been and always will be the greatest ever. Salaam. Love. Aamir,” the actor posted on the official Instagram handle of his banner, Aamir Khan Productions.

The actor’s post was accompanied by a folded hand emoji.

Confirming Dilip Kumar’s death on Wednesday morning, family friend Faisal Farooqui had tweeted from the veteran actor’s official handle: “With a heavy heart and profound grief, I announce the passing away of our beloved Dilip Saab, few minutes ago. We are from God and to Him we return. Faisal Farooqui.”