Sunny Singh opens up on playing Lakshman in ‘Adipurush’

Mumbai– Actor Sunny Singh has been cast as Lakshman in “Adipurush”, the new Bollywood interpretation of the “Ramayan”. He says he is excited to play a mythological character for the first time.

The film stars Prabhas as Ram, Kriti Sanon as Sita and Saif Ali Khan as Raavan.

“To play the character of Laxman on the big screen is going to be a very different experience for me as in the past I haven’t done a role in the mythological/period film genre. My past films have been commercial films but this one is different from all my other films,” he says.

Sunny has been part of films such as “Pyaar Ka Punchnama 2”, “Sonu Ke Titu Ki Sweety” and “Ujda Chaman”.

“‘Adipurush’ will mark my first Pan India Film. I can’t express in words how happy I was when I was offered this film,” he says.

He adds: “The background and setting of the film is that of ‘Ramayan’. People across India would connect to this as we all have grown up learning about the tale, so the overall impact is going to be grand, huge!”

Bhumi Pednekar: I want to create a beauty standard of my own

Mumbai– From playing an overweight girl in “Dum Laga Ke Haisha” to a character battling patriarchy in “Sonchiriya”, actress Bhumi Pednekar says she refuses to abide by the image of the quintessential Bollywood actress.

Bhumi adds that she wants to change the way people think about women through these roles.

“For many, it has always been about the outer physical beauty. But gone are those days when people were concerned (about only that). My thing was that it doesn’t matter. I am going to change your definition of what a quintessential Hindi film female actor is all about,” she says.

She adds: “We are all in this profession — the idea is to perform all these different parts and be part of these amazing stories that move people, bring about a change. That is exactly what I am going to do.”

Bhumi says that she refuses to accept the “beauty standard” set for women.

“I want to create a beauty standard of my own and that is exactly what I am trying to do. Through my cinema, I really want to bring about a change. I want people to love themselves, I want people to be more accepting of who they are, I want to entertain my audiences for sure and that is my number one priority. I want to leave them with a thought, a positive thought, a thought that will make their world a better place,” she says.

Shilpa Shetty Kundra: Anurag Basu is a mischievous kid on the set

Mumbai– Actress Shilpa Shetty Kundra, who judgea the dance reality show “Super Dancer: Chapter 4” alongside filmmaker Anurag Basu, says the latter is fun to be with on set.

“Dada is fun to be around with. He is like a mischievous kid on the set. He is always making us laugh and has a peculiar style of speaking which is entertaining and endearing,” she says.

She adds that he is a big prankster.

“He is always up to some prank and looks for an opportunity to pull our leg. But, on a serious note, Dada is warm and affectionate and playing pranks is his way of expressing that affection. Both Geeta and I enjoy his company,” she says.

Maya Sarao plays a journalist in ‘A Thursday’

Mumbai– Actress Maya Sarao’s first look in the upcoming film “A Thursday” was revealed on Tuesday. The actress plays a journalist in the thriller.

Maya’s look was released on the official Instagram page of producer Ronnie Screwala’s banner, RSVP Movies. Introducing Maya, the caption said: “Reporting live on National Television, knowing that one mistake could cost her everything. Meet the bold and fearless @mayasarao reporting live, all that happened on a #AThursday”

In the film, Maya plays a journalist who is reporting live on television. In the first look, she can be seen in a striped blazer over a pink shirt, with her hair cut short, a watch on her wrist and a serious look on her face. The film tells the story of an intelligent play school teacher, Naina Jaiswal (played by Yami Gautam) who takes 16 toddlers as hostage.

The film directed and written by Behzad Khambata casts Yami is a character with grey shades and also has Neha Dhupia.

Mumbai– Actor Arjun Mathur, who is currently shooting for the second season of “Made In Heaven”, hit the gym on Tuesday and updated fans about his fitness gameplan.

The actor, who got an Emmy Nomination for his role in the first season of the show, said that he is going to workout with “no substitutes” and “no shortcuts”.

Posting the picture on his Instagram from the gym, Arjun captioned: “Finally starting to get somewhere.No shortcuts. No substitutes. Just 4 months of extreme discipline, self-control, will-power and hard bloody work after an extremely toxic and unhealthy lockdown. Under the immaculate guidance of @samir_jaura and @thephysiquearchitect. No pain, no gainzzz.”

The actor got an encouraging response from industry colleagues like Sanjay Kapoor, Karsh Kale and Shweta Tripathi.

Arjun will also be seen in the series “The Gone Game 2” and “U-Special”.

Mumbai– Actress Yami Gautam, who plays a uniformed police officer in the film “Dasvi”, has an interesting anecdote from her location shoot in Agra’s Central Jail. 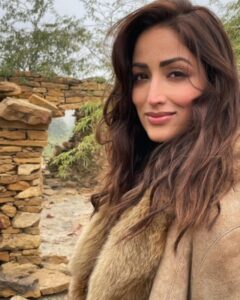 “When you enter the jail, there are some gates to cross and it is a long walk. As I would cross the path, the officers guarding the gates would salute. I used to feel thrilled and then I realised that it wasn’t me they were saluting, they were saluting the uniform!” Yami tells IANS.

Yami says playing a Haryanvi cop for the first time in the film is in sync with her efforts to push herself as an actress every time.

“My whole idea of selecting a film and going ahead with it has been to be as versatile as possible, to do my homework well. For Jyoti Deswal, an IPS officer, I did take coaching to get the nuances right. You always get to know through the nuances where you fit in without getting into a language barrier. We also worked a lot on language,” she says, about her preparation for playing a Haryanvi cop for the first time.

“I watched a couple of documentaries. One of the people who I really admire is Dr. Kiran Bedi and when I got to know that I am getting a chance to play an IPS officer, she came to my mind first. I did as much as possible from my end to get into the skin of the character and yet create my own. The moment you wear that uniform, there is something that changes in you. It commands respect,” she adds.

Mumbai– Singer-actress Amika Shail is all set for a rural makeover in her new OTT show. In the upcoming 15-episode web series tentatively titled “Nachaniya”, Amika will be seen playing a village girl.

The story revolves around three female friends who entertain people in villages with dance performances. “The name of my character is Dhaani and she is a naive village belle. It is very different from what I am in real life. Dhaani is not career-oriented in life and her only goals are to find her Prince Charming and get married. All she thinks of is setting up her home with her husband,” said Amika.

Amika can’t help gushing over her director. “Shraddha is a fantastic director and knows how to get the best output,” she said from her experience of woking in the series, which will get a new title soon and is set to drop on Disney+ Hotstar in April.

Amika has previously worked in the Akshay Kumar-starrer film “Laxmii”, besides the web series “Mírzapur 2” and “Gandii Baat”. She has also appeared on the TV seies “Baalveer Returns”. (IANS)