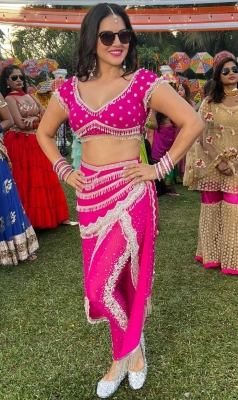 Mumbai– Actress Sunny Leone is shooting for a wedding song titled ‘Sharam Lihaaz’, choreographed by Vishnu Deva, at a studio in Mumbai.

Sunny, who has been busy with the action sequences of her upcoming projects, found the opportunity of working on the song as something that takes off the stress of heavy duty action.

Talking about her work schedule, the actress said: “The last few months have been hectic in terms of work. And a lot of what I was doing involved kicking and punching because two of my next projects are actioners.

“It was thus so enjoyable to indulge in a bit of dance and fun on the sets of this song. We rehearsed for a day and then got straight into the groove. It’s shaping up pretty well. I believe if you have fun at work, it shows.”

Sunny has starred in four chartbuster numbers in the matter of a month. These tracks include ‘Auntiyaan Dance Karengi’, ‘Machli’, ‘Dushtu Polapain’ and ‘Panghat’. 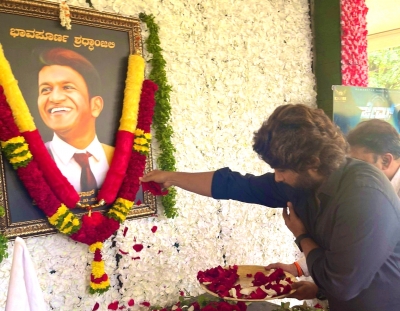 Allu Arjun spoke to members of the late actor’s family, his brother Shivarajkumar and his wife. Pictures from the meeting have surfaced on social media and have going viral.

Allu Arjun took to Twitter on Thursday to pen a heartfelt tribute to the late actor. In the picture, he is shown showering flowers on the portrait of Puneeth Rajkumar. Along with it, Allu Arjun wrote: “My humble respects to Puneeth Garu. My respect to Rajkumar garu’s family, friends, well-wishers and fans.”

Puneeth Rajkumar succumbed to a massive cardiac arrest on October 29, 2021. He was 46 years old at the time of his sudden death, which was widely mourned across Karnataka and elsewhere in India.

Mumbai– Actress Bhumi Pednekar, who is gearing up for her upcoming release ‘Badhaai Do’, has said that her character in the film is very different from her because she does not enjoy many of the privileges we take for granted. 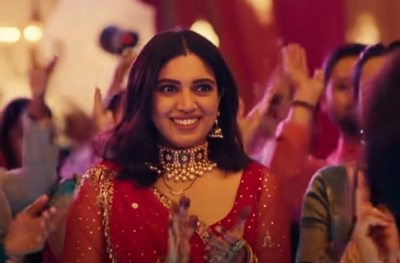 Commenting on her character, a lesbian sports instructor who marries a gay cop (played by Rajkummar Rao), Pednekar said: “She is somebody whose life is very different from mine and that is not because of our sexual preferences, it is more about the choices one makes in life. I am somebody who has lived her life full of freedom. My character does not have that privilege.”

Pednekar continued: “It wasn’t about how I would feel about other people or the character that I am playing. It was more about how I would live my life that I could not relate a lot with. It is not as easy as going to the gym. It is more of an internal process.”

Talking about her character’s look, Pednekar said: “The director and our team members were very clear that when we look at the woman she should look like somebody who is vulnerable. So I have not shied away from not wearing makeup. I wanted to to be away from the stereotype. I just wanted to be a woman and when the audience looks at me they must not look at the sexual preference of my character. That is how I wanted to play her.”

Chennai– Showering praise on Manu Anand, the director of his upcoming film ‘FIR’, producer and actor Vishnu Vishal on Thursday said that it was Manu’s honest nature that made him (Vishnu Vishal) want to work with him (Manu). 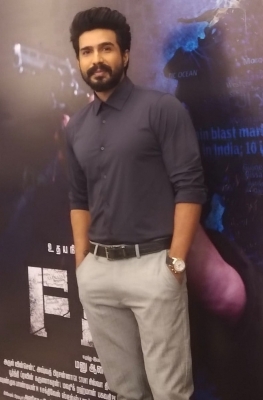 Speaking at the trailer launch event of the film, which was held in the city, the actor disclosed that when he first came onboard the ‘FIR’ project, it was only as an actor.

“Initially, another production house was producing the film and my association with the film was only as an actor. However, they could not continue it for some reasons. When Manu Anand realised this, he called me and asked me if he could meet me. I was outside and asked him to come to my office. I went to my office and met him,” Vishnu Vishal said.

Manu said the film was shaping up well but that it looked like the producer might not be able to produce it any further. Manu said, “I want to let you know about this situation as I did not want to keep you waiting and waste your time.”

“A director, who is directing his first film, will only look to keep his artiste. But Manu was honest about the situation as he did not want to waste my time. That was what made me want to work with him,” Vishnu Vishal said.

“When we started, I told him that I did not have enough funds and that my decision to produce future films would depend on how he made this film. He has more than lived up to his word,” Vishnu Vishal said.

Hyderabad– Telugu actress Neha Shetty has slammed a journalist who asked her a sexist question at the trailer launch of her upcoming film, ‘DJ Tillu’. 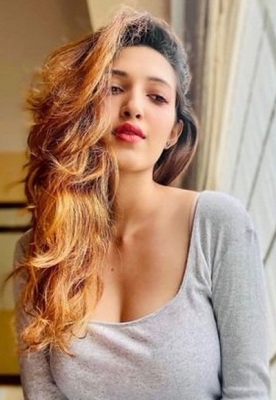 A journalist had referred to a romantic scene in the movie and asked the embarrassing question. Though actor Sidhu Jonnelagadda dodged the question, the embarrassment was visible.

As one of the tweeps posted the same video on Twitter, Neha Shetty, who has had enough of a hard time, called out the journalist.

Taking to Twitter to express her outrage, Neha Shetty said: “This question was very unfortunate at the trailer launch today. But I must go on to add that it simply amplifies the respect he has for himself and for the women around him at his workplace and at home.”

The journalist then had the audacity to reply that he had no wrong motive, but was being witty.

“As it is a romantic movie, I did ask a romantic question. Anyways. it is a great trailer”, the journalist wrote, as a reply to the actress’ message.

Soon, a couple of other journalists intervened and schooled him for asking such an inappropriate question at the launch event. Later, the journalist apologised to the actress in another tweet. (IANS)