Samantha could simply seek apology rather than filing defamation cases

Hyderabad– South India’s most happening actress Samantha Ruth Prabhu, who recently filed defamation cases against a couple of YouTube channels and an individual for streaming malignant content about her, has apparently received a legal blow.

Samantha had filed legal cases, which come under Kukatpally court in Hyderabad. After listening to her side of the case, the court apparently ordered that the actress could simply seek an apology from her opponents, rather than filing defamation cases.

“The actress can seek a word of apology from the content owners of the concerned YouTube channels, individuals and media outlets, rather than filing defamation cases on them,” the court suggested, as per reports.

The court went on to school the actress and apparently indicated that celebrities share personal details on public domain and then file defamation suits.

“In court, everyone is equal before the law. There is no sense of some being high and others being low. We will hear Samantha’s case as per the procedure,” the court concluded.

Samantha’s announcement about her divorce from Naga Chaitanya had invited unwanted comments and speculation about their relationship, and some channels went forward and linked her up with random colleagues.

Aditya Chopra comes up with teaser of ‘Bunty Aur Babli 2’

Mumbai– Yash Raj Films’ memorable ‘Bunty Aur Babli’ is returning with its second instalment after a wait of 16 years. The teaser of ‘Bunty Aur Babli 2’ released Friday and it has sent the audience into a frenzy for two reasons.

Firstly, Rani Mukerji and Saif Ali Khan are reuniting after 12 years and secondly, the film will see another set of ‘Bunty Aur Babli’ in the form of Siddhant Chaturvedi and debutante Sharvari.

The rib-tickling comedy brings together two sets of con artists who belong to different generations, against each other. How they try to prove who is the better pair by one-upping the other forms the crux of the story.

The innovative teaser takes no time in establishing this rivalry as we see the two pairs of con artists mercilessly troll each other. The moment the film’s teaser hit the internet, it became a huge sensation. Audiences were in for a sweet nostalgia along with a healthy dose of humour that draws itself from the rivalry between the two rival pairs.

The superbly crafted teaser left many wondering as to who came up with this idea.

Well now, we have learnt that it was Aditya Chopra, who came up with the brilliant idea of introducing the film in a unique way through its teaser which by the way has no footage from the film. It seldom happens that a teaser doesn’t make any use of its film’s footage and that’s what makes this teaser from ‘Bunty Aur Babli 2’ all the more special.

Spilling the beans, Rani Mukerji reveals, “It was actually Adi’s idea to set up ‘Bunty Aur Babli 2’ as a hilarious war of supremacy between two pairs of con-artists with a teaser that won’t have any film footage! He conceptualised it and he wrote it. He wanted us to troll each other. It’s amazing to see the reaction to the teaser because we had so much fun shooting it!”

The teaser hinted that the film’s trailer will be released on October 25. While Saif Ali Khan essays the role of the original Bunty a.k.a. Rakesh, Rani Mukerji will be seen reprising her role of Vimmy a.k.a. Babli in the second instalment of the film.

Siddhant Chaturvedi, who left the audience swooning over with his performance in ‘Gully Boy’, will be playing the new Bunty alongside talented actress Sharvari, who makes her foray into Bollywood with her character of the new Babli in this film. 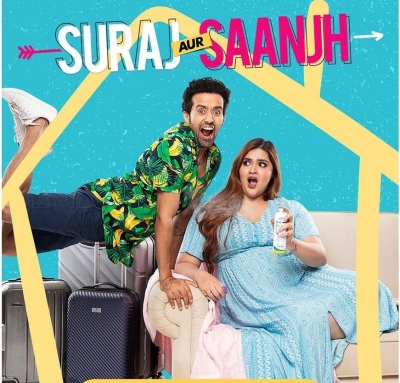 When asked about screening the series for filmmakers, Anil said, “I have shown the series to the filmmakers that I have worked with. Director Rohit Shetty liked it, he said this will work, this movie is entertaining, and it is well made and crafted. So half the battle is won”.

‘Suraj And Saanjh’ is Anil’s first outing as a solo hero. Talking about the responsibility and challenges a solo movie brings, he said, “While doing a solo film the responsibility increases. The entire load is on your shoulders. Challenging part as an actor was, mimicry and then you’re someone’s fan”.

Anil’ character is obsessed with Bollywood actors in the series, and takes a lot of references from hit comic characters, “Main objective was that it shouldn’t come across as mimicry as a lot of actors have done the parts brilliantly and other have mimicked them, but I didn’t want my performance to fall into that category, because my character is a fan, so there was a very thin line, I had to walk to this character.”

When asked if his digital release comes with a lot of provocative elements, he said, “It’s a family entertainer; anyone can watch it with their family and can easily relate with the story and characters. The film has a lot of references from other movies, which most people have watched”.

Mumbai– Parineeti Chopra is having a “working birthday” this year, which she tags as her “biggest present” as she has received appreciation for her films which the actress didn’t get in the last couple of years.

Parineeti, who turned 33 on Friday, in a chat with IANS, talked about her celebrations this year.

She said: “I am in Nepal right now and I am shooting for Sooraj Barjatya’s film called ‘Uunchaai’. It’s going to be very much a working birthday and I am very excited because I have been shooting and travelling a lot this year. This is what I had imagined how this year’s birthday would be given the kind of year that I have had. So it is perfect and I am excited.”

The actress is over-the-moon with the response she has got for her releases ‘The Girl On The Train’, ‘Saina’ and ‘Sandeep Aur Pinky Faraar’.

She tags 2021 as her biggest birthday present.

Ayushmann said: “It’s only once in a while that an actor comes across a story that makes him jump out of his comfort zone. While I have always backed novel stories, ‘Anek’ pushed me to perform with a renewed zest. It’s the kind of script that drives a person to give it your all. I am so proud that we’ve made a film like this and even more fortunate that I got the chance to headline it.”

Ayushmann said that ‘Anek’ is the kind of new age cinema that he believes in.

He added: “I am thankful to Anubhav Sir for choosing me to tell this special story and Bhushan Sir to be the support system we needed in our journey. Seeing our passion project go out to the world is so heartening.”

The film is touted to be a slick spy thriller, set against the geo-political backdrop of Northeast India.

Talking about the release date, Sinha said: “It was a challenging film to write and a difficult one to make. We shot it in rough terrain but what makes it special is that the takeaway was so gratifying. It was a delight to work with Ayushmann again who with his depiction of Joshua breathed life into the story. (IANS)