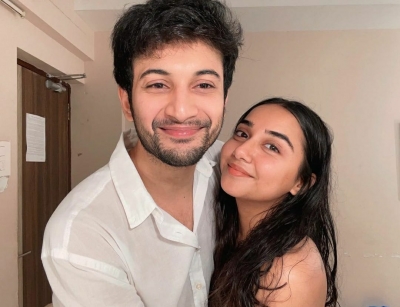 The actor shared pictures with his co-stars from the sets on the first day of shoot on his Instagram page with the caption: “Ready for the feels, the drama, the romance. All over again. Season 2, Day 1 Mismatched.”

Rohit also shared behind the scenes pictures with his co-actor Prajakta Koli and others.

Prajatka replied in the comments section, “Feels like risk.”

Rohit was last seen in ‘Feels Like Ishq’ on OTT.

Speaking on the occasion, Priyanka said: “I’m so proud to be taking on the role of Chairperson of the Jio MAMI Mumbai Film Festival. I’m really looking forward to working alongside these powerhouse women, Isha Ambani, Anupama Chopra, Smriti Kiran and the rest of the team, to take the festival to the next level.

“I’ve hit the road running… with ideas, thoughts and plans on reimagining the festival to find its rightful place in a world that has changed so much in such a short time. We’re all consuming film and entertainment very differently now and in the process, we’ve expanded the footprint of the cinema that we watch.

“I have always been a huge supporter and believer in films from across India and together, we hope to create a strong platform to showcase Indian cinema to the world.”

Adapting to a new paradigm, Jio MAMI 2.0 will have an expanded timeline.

Instead of a film festival that happens over a week, Jio MAMI is now going to pan out from October 2021 to March 2022. From October onwards until January, under the Year Round Programme, apart from Dial M For Films it will hold select digital screenings and masterclasses featuring talent from all over the world.

Mom’s advice to KJo: Watch what you say on Big Boss OTT

Mumbai– Host Karan Johar got a sound piece of advice from none other than his mother, Hiroo Johar, before he signed up for ï¿½Bigg Boss OTT.

When Karan was approached for the show, he was shocked, but his mom was speechless. She was just not sure whether her son, who had witnessed some heavy social media bashing during the first pandemic wave lockdown, should at all take up the project that is ruled only by public opinion, and only that alone, as celebrities lay themselves bare to be judged.

Hiroo decided to take matters into her own hands and lend some advice. Karan’s mother asked him to be careful of whatever he is going to say in the show.

Hiroo told Karan: “Watch what you say, who you say it to and when you say it.”

Now that’s some good advice. But do you think Karan will manage to live up to his mom’s expectations? Well, only time will tell!

ï¿½Bigg Boss OTT’ is streaming LIVE 24X7 on Voot in a historic first.

Mumbai– Television actor Ankit Bathla, of ‘Thapki Pyar Ki fame, who is all busy playing ‘Wasim in the web series ‘Crimes and Confessions is excited by the conjectures being made about his return to the Season 2 of the popular daily soap.

Ankit, who played ‘Dhruv Pandey’ in ‘Thapki Pyar Ki’, is also buzzed about whether he will be a part of the show’s upcoming second season.

“Well, if I’m doing ‘Thapki Pyar Ki’ or not, I really can’t comment at the moment. I can’t reveal if I’m part of it. However, I can say that comebacks are always great. It is like a medal. It is like you were a part of the season, and it was so successful that it is coming back.”

‘Crimes and Confessions’ is streaming on ALTBalaji.

Mumbai– For Drashti Dhami, her digital debut web series ‘The Empire’ has been an “overwhelming experience”.

Talking about the series, Drashti said on Tuesday: “It’s been an overwhelming experience — right from working with this brilliant team to actually seeing the audience’s reaction to the trailer. Every day on the sets of ‘The Empire’ was an experience on its own, and watching it all come together as a landmark in Indian entertainment makes the journey even more gratifying.”

The upcoming series shows how a 14-year-old ascends the throne of Ferghana and follows his destiny to become Emperor Babar (played by Kunal Kapoor).

A powerful force behind him is the iron-willed Khanzada Begum (Drashti Dhami), his elder sister and guide, the epitome of royal grace who is also vigilant, sharp and resilient, and is as important as any general in the teenaged Timurid ruler’s army.

Talking about her character in the show, Drashti said: “Playing the role of Khanzada Begum was challenging but equally empowering. Through her eyes, you will see how strategy and planning come into play and how easily allies become adversaries.”