Richa Chadha to shoot her maiden production in Uttarakhand

Mumbai– Bollywood actress Richa Chada loved shooting for the series ‘Candy’ in the mountains so much that she’s planning to shoot her first production ‘Girls Will Be Girls’ in Uttarakhand.

Directed by Shuchi Talati and produced through the banner Pushing Button Studios, the story is set in a Himalayan boarding school in a hill station in northern India.

Richa said: “I loved shooting for ‘Candy’ and not only because it’s a gripping narrative but because of the location in which we were shooting. It was so peaceful and serene that I found it easier to focus than in the city.”

The plot of the film revolves around the coming of age of a 16-year-old girl and her relationship with her mother.

The actress added: “Since ‘Girls Will Be Girls’ is set in a hill station boarding school, I think Uttarakhand will be a perfect location. Fingers crossed.”

Details about the cast for the film are still under wraps.

Mumbai– Actor Chandan Roy Sanyal talks about playing a ruthless villain in the upcoming movie ‘Sanak: Hope Under Siege’. Chandan is seen as a mastermind hostage-taker who will stop at nothing to get what he wants. The trailer is out now.

In the trailer, Chandan is shown as a villain and along with him the others are Vidyut Jammwal, Rukmini Maitra and Neha Dhupia.

Chandan Roy Sanyal says: “I’m excited for ‘Sanak’ because it marks the first time I essayed a full-fledged villain. The trailer of the movie has been cut brilliantly and I’m happy to have people expect the best from me. I’ve been fortunate to have well wishers who have appreciated glimpses of my work in the trailer. As the villain of the film, I will say that it takes a ‘sanki’ villain to have a ‘sanki’ hero.”

Directed by Kanishk Varma, ‘Sanak’ is a story of the events that roll out with a hospital under siege. The hostage drama will stream on Disney+ Hotstar on October 15.

Chennai– South Indian actress Vidyulekha Raman was trolled for posting pictures on Instagram that showed her wearing a bikini during her honeymoon trip to the Maldives. The trolls kept asking the actress when she would get a divorce.

The actor married her fiancée, Sanjay, a fitness expert, on September 9 and they had been to the Maldives for their honeymoon. In the caption to her post, in which she’s seen wearing a yellow floral swimsuit, Raman said, “I need six months off twice a year.”

Later, she shared she had been receiving messages and comments asking her: “When is your divorce?” She said she had answered the trolls by saying: “Live and let live.”

In a strong response, the actress said: “Hi Guys, When is my divorce? … Just because I am wearing a swimsuit? Whoa. Get out, 1920 aunts and uncles. Come in 2021! The problem is not the negative comments. But the way we think as a society. If a woman’s clothes are the reason for her divorce, shouldn’t everyone be in a “dressed properly” happy marriage? He (her husband) told me to ignore it and not address it. But I can’t just brush it off.”

She continued: “I can’t change your toxic, narrow-minded, or extremely regressive outlook on life. I hope the women in your life stand up to the sexist, oppressive and downright degrading ways in which you view a woman and her personality. Live and Let Live.”

Taniya Kalra opens up on playing a con woman in ‘Girgit’

Mumbai– Actress Taniya Kalra who was last seen in Sidharth Shukla’s digital series ‘Broken But Beautiful 3’, will be seen in yet another show ‘Girgit’. Taniya will essay the role of ‘Shamoli’, a con woman, in her next stint. ‘Shamoli’ is a control freak and a narcissist.

Talking about playing a control freak character, Taniya said: “I play ‘Shamoli’ in the series. She is the manipulative and assertive one in a duo that you’ll see in the series. Anyone can easily fall for her. I play a con-girl and her endeavour is simple, that she needs to gather money that not only satisfies her basic needs but more.”

Furthermore, the actress added: “I auditioned for the show and when I was handed over the script, I found it pretty interesting and something really different; something I’ve never done before. I’ve never been a part of a show like ‘Girgit’. It is quite intriguing. I wanted to play with the character since I got the liberty to do so. And I did.”

This will be Taniya’s first big project as a protagonist. Taniya is currently dubbing for the project, though the shoot for the series has already been wrapped up.

The show has already been shot and is currently in post-production. ‘Girgit’ will be streaming in the last week of October on ALTBalaji and MX Player.

Taapsee Pannu: Song ‘Zidd’ is the spirit of ‘Rashmi Rocket’

Mumbai– Actress Taapsee Pannu says the song ‘Zidd’ from her upcoming film ‘Rashmi Rocket’ is the spirit of her character Rashmi.

‘Zidd’ is sung by Nikita Gandhi, composed by Amit Trivedi and written by Kausar Munir. The song showcases the spirit of ‘Rashmi’ who decides to fight against all injustice to protect her respect, honour, and even her identity.

Taapsee shared: “‘Zidd’ is full of energy and the lyrics are spot on. This song showcases the grit and determination of Rashmi who has decided to win against all odds! I would say that this song in a way is the spirit of Rashmi.”

She added: “Amit Trivedi has a done a wonderful job and it has been beautifully sung by Nikita Gandhi.”

It is set to premiere on ZEE5 on October 15.

Mumbai– Actress Yami Gautam has revealed that she is suffering from a skin condition called Keratosis pilaris and said that she developed the condition during her teenage years and that there is no cure for it. 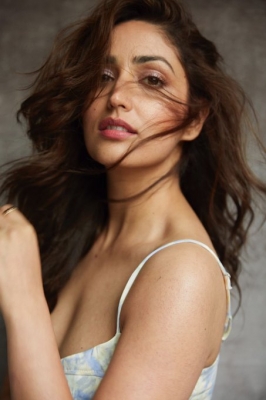 Yami also shared a bunch of unedited pictures embracing her skin on Twitter.

Alongside the images, she wrote: “Hello friends,I recently shot for some images and just when they were about to go in for post-production (a common procedure) to conceal my skin condition called Keratosis-Pilaris, I thought, ‘Hey Yami, why don’t you embrace this fact and accept it enough to be OKAY with it.”

Keratosis pilaris is a condition that causes rough patches and small, acne-like bumps on the skin.

Yami added: “I also found the courage to share my truth with you. Phew! I didn’t feel like airbrushing my folliculitis or smoothing that ‘under-eye’ or ‘shaping up’ that waist a tiny bit more! And yet, I feel beautiful.”

She revealed that she has been dealing with it for many years and has now decided to let go of all her fears with the post.

“I developed this skin condition during my teenage years, and there is still no cure for it. I’ve dealt with it for many years now and today finally, I decided to let go of all my fears and insecurities and found the courage to love and accept my ‘flaws’ wholeheartedly,” she concluded.(IANS)