Mumbai– Actor Priyaank Sharma, who is the son of yesteryear actress Padmini Kolhapure and cousin of Bollywood actress Shraddha Kapoor, says that family background does not help any creative individual to achieve success.

Recently Priyaank launched his music label Dhamaka Records. He also made his Bollywood debut with the film ‘Sab Kushal Mangal’ that also featured Akshaye Khanna in 2020.

Asked about coming from a family of actors and filmmakers, if it has helped him in anyway to find his space in Bollywood, Priyaank told IANS: “I think growing in a family where everyone is somewhere part of the creative profession, be it music, cinema, film producing, I have seen what a risk-taking business it is.

“I have seen how life changes between Friday to Friday. So from the beginning, I knew that my family background will not help me to get my breakthrough moment and if I want to take up acting professionally, a sense of uncertainty will be there. So, when people talk about nepotism, I wonder if they understand that the creative growth of an artist has nothing to do with family background. Rather we have a different pressure.”

Priyaank said that even though currently he is working on a project, he is waiting for the official announcement and until then, everything is under wraps. 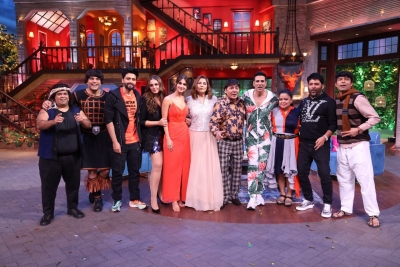 In a segment, when Kapil asked the audience members who is the one person they would like to get hijacked with, a fan quickly replied “Shahrukh Khan“.

The female fan even professed that she wants to get married to a person like Shah Rukh.

In order to fulfil her wish of speaking to Shah Rukh, Akshay dialled Shah Rukh’s number only to find that his number was switched off.

The fan hilariously asks Akshay to dial Shah Rukh’s wife Gauri Khan’s number which leaves everyone including the cast of ‘Bell Bottom’ in splits.

Along with Akshay, actors Vaani Kapoor, Huma Qureshi and producer Jackky Bhagnani were present on the show, hosted by comedian Kapil Sharma.

Archana Puran Singh, Krushna Abhishek, Bharti Singh, Chandan Prabhakar and Kiku Sharda among many others make a comeback on the show.

Mumbai– Actor Kunal Karan Kapoor, who is playing a lead role in the upcoming show ‘Ziddi Dil-Maane Na’, finds it youth-centric and different from other daily soaps.

Talking about what makes ‘Ziddi Dil-Maane Na’ different from all other GEC shows on television, Kunal shares: “This show is like a breath of fresh air, and I believe there are very few shows on television at this moment which bring forth aspirations of today’s youth and have romance-driven relationships.”

The ‘Na Bole Tum Na Maine Kuch Kaha’ actor adds further about his on-screen character and says: “I have essayed in the past a bit intense characters and have always wanted to do a youth-based show and this was a perfect opportunity. This show talks about six different people with different personalities and I have faith that their journey will strike a chord with the youth of our country and will enable them to have one-on-one connection with the characters.”

Arjun Kapoor: I wasn’t some hyped up debutant, ‘Ishaqzaade’ changed my life

New Delhi– Actor Arjun Kapoor has been in the Hindi film industry for nine years. He made his debut in 2012 with ‘Ishaqzaade’, which he tags as his “gamechanger” as he says he was not spoken about for two to three years before his maiden movie came out.

Ever since his debut in 2012. Arjun has featured in many films such as ‘2 States’, ‘Ki &Ka’, ‘Half Girlfriend’, ‘Panipat’ and ‘Sandeep Aur Pinky Faraar’, among many others.

However, ‘Ishaqzaade’ remains close to his heart.

The 36-year-old added: “Nobody knew me. I was not some hyped up debutant. I wasn’t spoken about for 2-3 years before my film came. I was irrelevant and nobody knew of me and that changed my life forever.”

As of today, the actor has a gamut of films in his kitty such as ‘Bhoot Police’, ‘Ek Villain Returns’ and the recently announced ‘Kuttey’.