Payal Ghosh trained by Amer Kamra for her sports film

Mumbai– Actress Payal Ghosh is set to play a sportswoman in an upcoming Bollywood film. Renowned trainer Amer Kamra is training her for the role.

Sharing her experience of being guided by athlete Amer, she said: “Amer is no doubt helping me best to perform stunts. While I’m learning for my movie but this is going to be a lifetime experience.”

Talking about her upcoming untitled sports film, she revealed: “The film is not a biopic, it is the story of a girl who enjoys sports but her family forces her to get married and start a family. The film is about her struggle between her love for sports, having a career, and her family.”

Amer is a real-life athlete and bodybuilder who has trained several celebrities. He elaborates on guiding Payal for the film. “Payal is going to rule the screen as she is full of energy. She does her best and is very easy at performing stunts. She can actually be a real-life athlete. People will see her doing long jumps, climbing poles, etc. In all, audiences will get to see a different Payal,” said Amer.

Yami Gautam: Isn’t easy to shift from one character to another

Mumbai– Yami Gautam has her diary full as she has several movies lined up such as ‘A Thursday’, ‘Dasvi’ and ‘Lost’. The actress says it isn’t easy to shift from one character to another and believes a character should not suffer because of tight schedules.

The 32-year-old actress will play a crime reporter in Aniruddha Roy Chowdhury’s ‘Lost’, a kindergarten teacher, who takes children as hostages in ‘A Thursday’ and an IPS officer in ‘Dasvi.’ She also has the spooky adventure comedy ‘Bhoot Police’ in the pipeline.

Yami said: “I have always wanted to play versatile roles. I am glad that filmmakers have faith in me with their material and are offering diverse projects. It isn’t easy to shift from one character to another.

“I remember being on the sets of ‘A Thursday’ just a day after wrapping ‘Dasvi’, and immediately after that, I was in Kolkata for ‘Lost’. I believe a character should not suffer because of the tight schedules.”

The newly-married actress says one should not take “pride in exhaustion”.

She added: “And for that, an actor should take a moment to breathe or just spend time with family in order to avoid burning out. One should not take pride in exhaustion. We need to start respecting that little space for a better performance.” 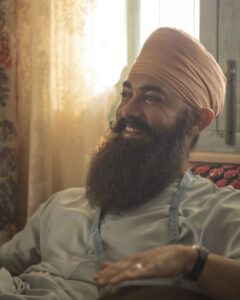 The actor along with other unit members will visit various locations on Friday and Saturday for the shoot.

The shooting is scheduled at Amalapuram, about 60 km from Kakinada, on Friday while the unit will shoot some more scenes at Kakinada beach on Saturday.

Khan checked into a hotel in Kakinada, where tight security arrangements were made. The private security personnel did not allow anyone to meet the actor in view of Covid-19 pandemic.

Being produced by Aamir Khan Productions, Viacom18 Studios and Paramount Pictures, ‘Laal Singh Chaddha’ has already completed most of the shooting in Srinagar, Ladakh, Kargil, Chandigarh and other locations.

Mannat Noor: There can’t be another song like ‘Laung Laachi’

Mumbai– Singer Mannat Noor, known for her popular song ‘Laung Laachi’, is back with a new soundtrack titled ‘Mera Mahi’.

Talking about her new song, Mannat told IANS: “Mera Maahi is the kind of song every girl would relate to. The music, video, and lyrics are amazing. The theme of the song is about a girl having a conversation with her parents about the kind of guy she wants to spend her life with. I had a great time working on the track. While I’ve sung a lot of songs, this was special because I got to feature in it as well, alongside Yuvraaj Hans, my co-artiste.”

As she continues to get recognition for her song from music aficionados, Mannat shared that the success of the song built up her confidence.

“Whenever your work is loved, it gives you a different high altogether. ‘Laung Laachi’ is an extraordinary song and I believe there cannot be another song like that. The kind of love it has garnered from music lovers is warming.”

Mumbai– Jackie Shroff and Sangeeta Bijlani will be the special guests in the upcoming episode of ‘Super Dancer – Chapter 4’, which will feature 75 different dance forms from across the world. The show is being judged by Terence Lewis and Anurag Basu. 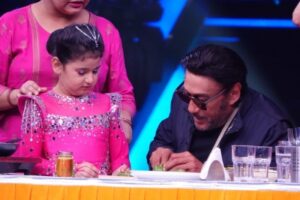 Jackie is all praise for the duo. “Bhirhu!” he exclaimed. “What are you? I am telling you guys, Urmillaji would have been the happiest person after seeing this performance. Everything in this act was fantastic.”

Echoing Jackie’s thoughts, Sangeeta Bijlani says, “The moment you guys started your performance with salsa and the way you carried through the act was just exceptional.”

After showering praise on Esha, Jackie asks her if she likes lady’s finger (‘bhindi’) as he had especially brought some from his farm. He then starts to remove small boxes of condiments from his bag and goes on to cook ‘kanda bhindi’ on the sets. He invites everyone to taste the dish and informs Esha, “This is called ‘kanda bhindi’.”