“It’s about the character titled ‘Rasal’ in the show as a protector of her brother. We have always associated Rakshabandhan with the brother being the protector; here it’s the sister. I completely relate to this show being a sister of a younger brother,” she said.

According to her, everyone is playing a unique role, and contributes perfectly to the storyline of the show.

“I’m playing ‘Chakori’ whose only aim is to be rich. I’m called the ‘looteri dulhan’. I may have had a weird past as a child, but today I know my only motto is to be rich and stabilize my life by hook or crook. I have many shades. I take multiple disguises,” said the ‘Divya Drishti’ actress.

Nyra dons multiple looks in the show and she says: “My first look took me almost two hours. We had to achieve a particular look with eye make-up. There is a tattoo on my neck and my hand. When I have multiple disguises, it always takes me two hours. The old woman’s look was unique. My current look is my favourite. I look like a lovely ‘thakurain’,” she said.

She has some favourites on the set of the show, as she shares: “Definitely, Nishant Singh Malkani and Hardika Sharma. Nishant is so particular in his expression. He does the role really well. And I just love Hardika,” she shared.

Yami Gautam: Always try to make sure I get regional accent correct

Mumbai– Yami Gautam Dhar has started preparing for her role for upcoming investigative drama ‘Lost’, which is being shot in Kolkata. The actress says language is fundamental in giving the character a sense of belonging and that she always tries to make sure that she gets the regional accent correct.

Essaying a feisty crime reporter based out in the heartland of Bengal, Yami is going the extra mile by learning the language to get into the skin of her character.

Yami said: “Language is fundamental in giving the character a sense of belonging and look genuine on screen. I always try to make sure that I get the regional accent or the dialect correct, even for a brief dialogue.”

“For ‘Lost’, I am conversing with the Bengali crew on the sets to understand the little nuances of their speech. It is also helping to catch its diction for my role,” the actress added.

Aniruddha Roy Chowdhury is directing ‘Lost’, based on the issue surrounding media integrity.

Yami also has ‘A Thursday’, ‘Dasvi’ and ‘Bhoot Police’ in the pipeline.

Joining the ensemble cast of ‘Those Pricey Thakur Girls’, Sukhmani says, “Yes, I am excited to be a part of this web series. It’s a story of five sisters and I’m playing one of the sisters.”

Sukhmani has written scripts for films like ‘1920 London’, and other films for Kunal Kohli, Aniruddha Roy Chowdhury, Endemol, Balaji, Netflix. In 2017, she won the ‘Best Actress’ in Digital Awards 2017 for her web series ‘Love Bytes’. She also hosted the 2019 IIFA Awards.

‘Those Pricey Thakur Girls’ will be streaming on Disney+ Hotstar.

He shares: “Ridhima is a rock star. She has been through so much in her life in these past few years that truly reveals she has a never-give-up attitude. I have worked with her and the amount of love she has had for her mother and the kind of turbulent personal life she has, truly hats off to her that she has come out so strong from each of her personal battles.”

Pankit sees her as a winner of ‘Bigg Boss OTT’. “It’s obvious that after what she has been through she might be taking hormonal pills as it is not easy to be in her shoes. But she is a winner all the way and she will leave no stone unturned to win ‘Big Boss OTT’,” he adds.

Rooting for her, Pankit says: “She is extremely talented and hardworking and she is someone who is born to be a star. She is the perfect combination of beauty with brains, she knows how to handle people strictly and also with love. She knows her goals clearly and is not apologetic about it and she goes after them with full force.”

Sanya Malhotra on her shooting experience with Aamir Khan

Mumbai– Actors Sanya Malhotra and Varun Sharma will be seen as the special guests on ‘Zee Comedy Show’ during this Sunday’s episode. Farah Khan judges the show and actress Chitrashi Rawat’s spoof of the movie ‘Dangal’ is going to be the highlight of the show. 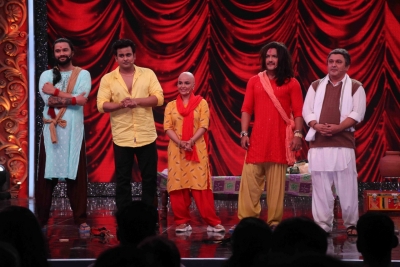 Sanya Malhotra shared a few anecdotes about the movie ‘Dangal’ and her experience of shooting with Aamir Khan. In fact, she also revealed how Chitrashi had once auditioned alongside her for ‘Dangal’. Leaving everyone startled with this revelation, Sanya also went on to mention the incidents that followed between them during the audition.

As Sanya Malhotra revealed, “Not a lot of people know this, but Chitrashi and I had given the audition for ‘Dangal’. We had even done workshops together. We also fought in the movie during the auditions. In fact, the audition process took nearly two months, and I must say, we had a great time together.”

Talking about Aamir Khan’s ‘Mr Perfectionist’ tag, she further added, “While Aamir Sir strives for perfection, on the sets of ‘Dangal’, our director Nitesh Tiwari deserved the Mr Perfectionist tag. He was the real ‘baapu’ for us, who used to wake us up at 5 am to wrestle and before shooting, we were trained for 10 months and only when we were ready, our shooting started.” (IANS)