Mouni Roy on shooting a pandemic saga amid Covid outbreak

Mumbai– Actress Mouni Roy says her upcoming film, London Confidential, is in sync with the realities of the present world, and that made the experience of working on it surreal.

“London Confidential” is an espionage saga centred on the conspiracy to spread an infection all over the world. The film also features Purab Kohli, and has been shot in London post lockdown.

“When I read the script for the first time I really liked it but at the same time, I had lots of questions. How would the makers treat the story, the plot for which we did multiple zoom calls with the director, I wondered,” Mouni said.

“Additionally, the backdrop of the film is the Chinese conspiracy and the world going through a virus pandemic that originated from the region. It felt so surreal and strange at that time to think about shooting during a pandemic about a pandemic,” she added.

Directed by Kanwal Sethi, the narrative revolves around a conspiracy to spread an infection. The film drops on Zee5 on September 18.

Dubai– Preity Zinta, who is currently in Dubai to attend the Indian Premier League (IPL) 2020, got a third Covid test done after arrival in the country, and the outcome was negative again. 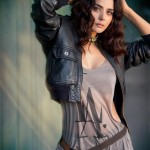 The actress, who co-owns the Kings XI Punjab team, still has to undergo two more tests.

Preity shared a video of her getting her test done. In the clip, she is seen sitting on a sofa, while a doctor dressed in a PPE suit takes her nasal swab.

“3rd Covid test was done and the result was Negative. I’m so happy and relieved and grateful to this wonderful lady for being gentle while testing cuz it’s quite an experience getting a covid test,” she wrote alongside the clip.

She added: “Now two more tests to go and 2 more days in quarantine. I’ve been so jet lagged that I got my quarantine days wron. It’s #Day5 of Quarantine today. #Quarantinelife #Pzipldiaries #Ipl2020#Ting.”

The IPL is set to commence on September 14.

Kartik Aaryan works out at midnight because he is busy doing nothing all day!

Mumbai– Actor Kartik Aaryan indulged in a midnight workout session as he was busy doing nothing all day.

In a sweaty selfie Kartik shared on Instagram, the actor is seen sporting a grey vest. “Midnight workout. Was so busy doing nothing in the day,” he captioned the image.

Recently, Kartik posted a funny message, demanding to know who the first person was to eat a bat. His reference was to the belief in certain sections that the coronavirus spread because a human may have come in contact with an infected bat, probably consuming it.

Kartik will next be seen in “Dostana 2” and “Bhool Bhulaiyaa 2”.

“Tbt 2000…pic taken on the set of my first Malayalam film #Chakram with @mohanlal! The film got shelved after the first schedule…not looking as bad as I imagined I did,” she wrote.

In the image, Vidya is seen dressed in plain red suit while Mohanlal looks dashing in thick moustache.

Vidya was last seen in “Shakuntala Devi”. The film casts her in the title role of the mathematics genius Shakuntala Devi. She also recently turned producer when she co-produced the self-starring short film, “Natkhat”, which addresses patriarchy and toxic masculinity.

Mumbai– Bollywood actress Sonam Kapoor is being trolled all of Tuesday for saying she wants to be like Jaya Bachchan when she grows up.

Veteran actress and Samajwadi Party member Jaya Bachchan in her speech at the Rajya Sabha has alleged that a continuous attempt is being made to defame the film industry.

Extending support to her, Sonam Kapoor tweeted from her verified account: “I want to be her when I grow up..”

Netizens immediately replied to her tweet, questioning the 35-year-old actress what does she mean by “growing up” at 35.

“Aur kitna grow ?? U already became an aunty. Do u think urself to be sweet 16 ?? And yes, say directly that u too wanna support consumption of drugs & save criminals like Jaya ! #WeStayUnited4SSR,” tweeted a user.

“kaun se class mein padhti hain aap (in which class do you study)?” asked another user.

“Roses Are Red
Violets Are Blue
Sonam Kapoor at 35 is Still Not Grown Up
Lets Laugh Me & You #SonamKapoor,” shared another user.

“Chachi, you are already 35 now. So when you will grow up?” asked another user.

“Sonam Kapoor still thinks of growing up? Acted in movies, modeled, gossiped on Karan Johar shows, got an award, and later got married. When will she grow up? God! ” exclaimed another user. (IANS)