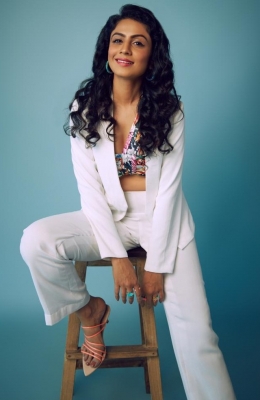 Manasi Parekh excited for her upcoming film with Paresh Rawal

Mumbai– Actress Manasi Parekh is all set to share the screen with veteran star Paresh Rawal in the upcoming film ‘Dear Father’.

Manasi reveals, “Pareshji had offered this role to me some time back, when he was making the play. But I couldn’t, because I was already doing a television show and a Gujarati play at that time. I was really upset about dates not working out and really wanted to work with him.”

She added: “However, after some years when he called me back saying that the film is finally happening and asked me if I want to be a part of it, I immediately said yes. I have always been wanting to work with him and for me its a dream come true. It’s a very intense film and my character has a lot of confrontations with him”

‘Dear Father’ is all set to release on March 4.

Mumbai– Bollywood diva Madhuri Dixit along with actor Sanjay Kapoor will be seen together recreating the iconic steps of the song ‘Akhiyaan Milaoon’ and ‘Nazrein Mili Dil Dhadka’ from their film ‘Raja’ on ‘The Kapil Sharma Show’. 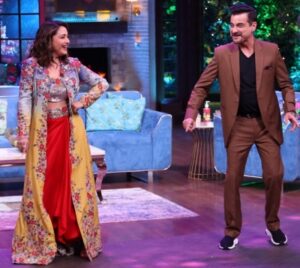 They are appearing as celebrity guests to promote their web series ‘The Fame Game’.

In conversation host Kapil Sharma, Sanjay shared how he came to the show after practicing the dance steps for the songs. As he thought he might have forgotten the choreography, but Madhuri will remember each dance move.

He says: “To tell you the truth, I learnt the steps and came. I knew I had to dance with ma’am. She (Madhuri Dixit) would remember the choreography, but I will definitely forget it. So, I have watched the video 10 to 20 times before coming here.”

Sanjay also shares how he was ready at the word go when he heard that Madhuri Dixit would play his wife in ‘The Fame Game’: “Before the director completed his sentence I sat in the car and said, ‘let’s go!'” 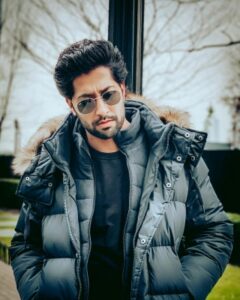 Ankur, who plays the character named Vicky in this action film, shares, “Being part of such a film directed by Ali Abbas Zafar not only exciting but an honour.”

“The character I play is quite interesting and I’m thrilled to begin the shoot for it. I’m certainly looking forward to kicking off its shoot. It’s great to be sharing the frame with gifted actors.”

Ankur also has recently wrapped up the shoot of his upcoming project ‘Crackdown 2’, in which he will be seen in the role of Pakistan’s Intelligence Head. 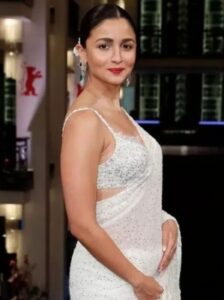 Alia made an appearance in a pristine white saree by the popular designer duo in Berlin on Thursday at the screening of the Sanjay Leela Bhansali’s upcoming directorial at the event.

Rimple and Harpreet said: “It was an absolute pleasure to design for Mr Bhansali and Alia Bhatt for the screening of ‘Gangubai Kathiawadi’ at Berlin film festival. Though we regularly style celebrities on red carpet & movies, this was special because the entire ensemble for Alia has been created exclusively for the screening, keeping her personal style & comfort in consideration.”

The designers kept the thematic essence of the film in mind as well as creating a look that was a modern classic. It took approximately three thousand and four hundred man hours and a team of twenty five master karigars to complete the saree which features delicate handcrafted embroideries referenced from archival Edwardian and French Lace Shawls.

“A full team of skilled karigars worked day & night to create the saree in record time,” the designers added.

The embroideries were rendered using jaali-work, shadow embroidery, silk floss threads, mother of pearl paillettes, hand-cut sequins and imported pearls of varying sizes. The scalloped palla was finished off with a hand-knotted silk dori macrame fringe. The look was complemented with a handcrafted minaudiere and a plush lame-pashmina shawl with pearl-work borders to ward off the Berlin chill.

For the director, Rimple and Harpreet decided to stay true to his inherent understated elegance and came up with a tonal black sherwani that features an all over tessellated texture derived from sacred geometry. It was paired with a classic ivory kurta and pants.

‘Gangubai Kathiawadi’ tells the tale a young girl named Ganga who becomes Gangubai, a madame in the red light area of Kamathipura. It is loosely based on the true story of Gangubai Harjivandas, popularly known as Gangubai Kothewali, whose life was documented in the book ‘Mafia Queens of Mumbai’ written by S. Hussain Zaidi.

Raveena Tandon remembers her late dad on his birth anniversary 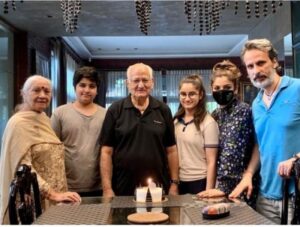 She dropped a family picture on her Instagram, remembering her father. The actress wrote: “Happy Birthday Papa. My life will never be the same again. You will always be the apple of my eye. Cheers! #throwback 17th Feb ’21”

Ravi Tandon was a director, producer and writer. He has directed films such as ‘Nazrana’, starring Rajesh Khanna, Sridevi and Smita Patil; ‘Khel Khel Mein’, featuring Rishi Kapoor and Neetu Kapoor; Amitabh Bachchan-starrer ‘Majboor’, and ‘Anhonee’ with Sanjeev Kumar in the lead role.

He was suffering from lung fibrosis for the past few years and he passed away recently due to respiratory failure. (IANS)