Krrip Kapur Suri: ‘Essaying the role of a villain is one of my fortes’

Mumbai– Krrip Kapur Suri is all set to unleash a new act of villainy on the small screen. It is an area, he says, is his forte.

Krrip will essay Guru Bhai, a menacing don on the Hindi fantasy drama series “Hero: Gayab Mode On”. Guru Bhai and his dreaded gang will wreak havoc on the city, and the show’s protagonist Veer, played by Abhishek Nigam, will have a tough time averting the nefarious plan.

“Essaying the role of a villain is one of my fortes. I am glad to be associated with this show. It gives me the opportunity to don a new avatar, Guru Bhai. Shooting for these scenes was intense but also something I enjoyed doing at the same time. It will be interesting to watch when Guru Bhai and Veer come face to face,” says Krrip, about the popular Sony SAB show.

Madhuri Dixit is ‘back on set’, days after second dose of Covid vax

Mumbai– Actress Madhuri Dixit Nene on Tuesday took to Instagram to inform fans that she was “back on set”.

The 53-year-old veteran had taken her second dose of the Covid vaccine a while back, and on Instagram she has posted a series of pictures where she strikes classic poses in a shimmering silver saree and matching blouse. She completes her look with matching neck piece, earrings and a single bracelet on the right hand. She wears her hair open and goes for matching heels in the photo-op of three images.

“Back on set,” she wrote as caption with the images, along with a film projector emoji.

While the actress did not share details about what the shoot, it seems like she faced the camera for a special shoot.

Currently, Madhuri is readying to enter the OTT space with the thriller series “Finding Anamika”. She plays a superstar actress who goes missing one day. The show also features Manav Kaul and Sanjay Kapoor.

Rasika Dugal: I expect people, at least my loved ones, to be there for me

Mumbai– Actress Rasika Dugal expects her loved ones to be there for her in case she needs help, and similarly she would always reach out to them whenever required.

Rasika made the observation while comparing her nature with that of Dr Meera, the character she plays in “Out Of Love Season 2”.

“Meera and I are different in many ways. She is a quiet person who will try to make things work on her own before she reaches out for help. I expect people, or at least my loved ones, to be there for me and reaching out to them would be one of the first things I would do,” Rasika said.

Talking about her similarities with her on screen character, the actress said: “Meera being reckless in Out of Love Season 2 was not new to me. We see glimpses of this side of her in the previous season too. In a way, that side of her is relatable to me because at most times I tend to be instinctive.”

“I think, there is a very thin line between being instinctive and being reckless. It’s usually the outcome of an instinctive decision that labels the decision as either reckless or spontaneous,” she suggested.

Neetha Shetty: Working during this situation is quite stressful

Mumbai– Actress Neetha Shetty has been playing a cop in quite a few shows lately, and her new outing sees her solve a mysterious death in a haunted setting.

Neetha will be seen playing the role of a police officer in an episode of the segment “Manohar Kahaniyan” in “Tata Sky Adbhut Kahaniyan”. She sets out to crack the mystery around a death in a haunted house. This series also features actors Sumit Wadhwa, Anand Sharma, and Neha Singh.

“Recently, I have been playing the role of cops in quite a few shows. However, playing a cop for this episode was different and fun. I have always enjoyed a touch of tension that ups excitement as well as the possible scares in a horror series,” she said.

She added: “Shooting or working during this situation for anyone anywhere is quite stressful because one must take all the precautions. Everyone was careful about wearing a mask and following sanitisation protocols.”

Mumbai– Actor Bobby Deol has fond memories of his debut film “Barsaat”, which released in 1995. Looking back, he recalls how a casual accessory he wore in one of the songs of the film went onto become a fashion trend.

“Anything that is first is always special. The zeal one has while starting something new is unique. ‘Barsaat’ was my first movie and there are so many memories attached to the film,” said Bobby.

Looking back, the actor shares an anecdote: “One of the things I remember, at that time I was fascinated with sunglasses and I had a blue pair, which was my favourite. I wanted to wear them in the song ‘Teri adaao pe marta hoon’. Back then, I didn’t know they would become so popular. The audience loved that look and it became a fashion trend.”

“There’s another thing that comes to my mind, during a horse-riding scene I met with a minor accident and broke my leg. Luckily, it was my last scene of the movie. There are quite a few moments from the movie that I cherish even today,” shared Bobby.

The Rajkumar Santoshi directorial cast Bobby opposite Twinkle Khanna, who made her Bollywood debut with the film, too. Although the film failed to live up to its hype at the box office, the songs by Nadeem-Shravan were a rage.

The film will premiere on Zee Bollywood soon.

Mumbai– Twinkle Khanna on Tuesday gave a glimpse of the new normal in her life, stating that the balcony was turning into a forest and the children were becoming masked superheroes.

Twinkle posted her comment with a picture of her daughter Nitara on Instagram. In the image, Nitara is seen wearing a mask and sunglasses.

“The new normal: The balcony is becoming a forest and all our kids are turning into masked Superheroes! I marvel at how they have adapted to just slipping on a mask as they leave the door, the lack of fuss over their isolation,” Twinkle wrote as caption.

She added: “They give us hope and joy and help us through our toughest times. And also behave like crackpots to make us laugh, like this little one right here. #littleheroes”.

Twinkle is married to actor Akshay Kumar. The two tied the knot in 2001. The couple have two children, Aarav and Nitara.

Mumbai– Actor Anupam Kher says he is grateful to have his wife, actress Kirron Kher, and son Sikandar Kher by his side, as they give him honest feedback about his work. 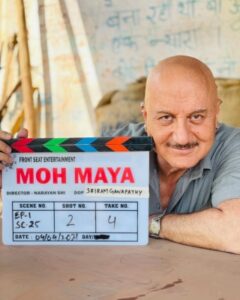 “I am lucky to have my wife and my son who keep me grounded and tell me, ‘this was rubbish!’ I have full faith in their criticism. I know they are doing so for my benefit,” he told IANS.

The actor adds that the only thing that has helped him survive in the industry is the fact that he has never given up.

“If you are a trained actor, that training stays with you. More than that, personally, giving up is never an option. That is what keeps me going. My competition is with myself. I am a hard taskmaster and I am tough on myself,” he says.

Kher adds that he keeps learning from everyone around him. “When I look around and I see other actors performing in movies, I say there is so much to do and learn. I am not happy with the laurels being bestowed upon me. I may lie to someone else but not to myself,” he says. (IANS)