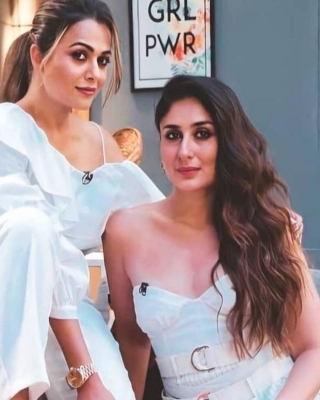 The development comes a week after Bollywood director Karan Johar threw a private bash for around a dozen people at his home following which the two actresses tested positive on Sunday.

With both showing mild symptoms, the actresses have been shunted to home quarantine and treatment in their sealed flats while the BMC H-West Ward has taken up sanitisation of the four buildings.

In a simultaneous exercise, the civic health authorities have managed to trace around three dozen contacts of the celebs who attended the party at Johar’s home last Wednesday and they have been sent for tests, with their reports expected shortly.

Among others who were present at the party was Seema Khan, wife of actor Sohail Khan whose infection status is not clear, though the host Johar has tested negative.

Mumbai– Newly-wed celebrity couple Vicky Kaushal and Katrina Kaif returned to Mumbai on Tuesday from an undisclosed location after a week of wedding festivities. 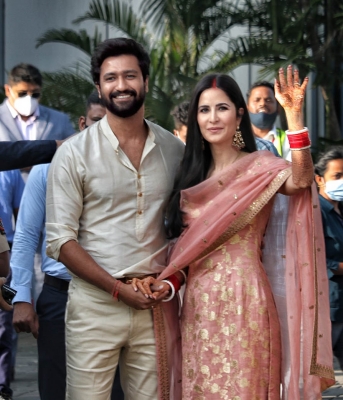 Vicky KaushalThe two were photographed at the Mumbai airport as they wore outfits complimenting each other.

While Katrina wore a pink coloured salwar kurta, Vicky sported an ivory coloured shirt paired with beige coloured pants. Katrina rounded her look with open tresses, vermillion, red bangles and big earrings as they were welcomed to the city by the fans.

The actors tied the knot on December 9 in an intimate ceremony that was marked by the presence of family and close friends. The wedding celebrations began from December 7 and saw ceremonies of ‘Mehendi’, ‘Haldi’ and ‘Sangeet’. Post their marriage, the two have been sharing heartwarming pictures from the wedding celebrations.

The actors will soon resume on their respective projects. While Katrina has ‘Phone Bhoot’ and ‘Tiger 3’ in the pipeline, Vicky has ‘Govinda Naam Mera’ and ‘Sam Bahadur’ up his alley.

Mumbai– TV actress Shraddha Arya talks about the two-year leap that the popular show ‘Kundali Bhagya’ is going to take in the upcoming episodes.

Talking about the leap, Shraddha Arya mentioned: “The two-year leap is filled with new twists and turns. The fresh narrative will see Preeta returning to the Luthra house with the sole intention of saving the family from the clutches of Prithvi Malhotra.”

The constant chaos in Karan (Dheeraj Dhoopar) and Preeta’s (Shraddha Arya) lives has surely grabbed the attention of the audience. The episode before the leap will show Preeta being forced to leave the Luthra house by Karan and her family.

The show will take a two-year leap unfolding a new narrative. The audience will see Preeta living with her family and working as a physiotherapist in a clinic. Mahesh Luthra (Naveen Saini) pleads Preeta to save the Luthra family from Prithvi Malhotra (Sanjay Gagnani). Preeta decides to return to the Luthra mansion and realises it’s now owned and run by Prithvi Malhotra.

Shraddha adds: “While Preeta is upset at being thrown out of the house, she will get emotional seeing her family suffering. It will be a tough time for the Luthras and I feel the leap will bring in some high-voltage drama into the show. It will be a fresh challenge and I am quite kicked about it. I hope our fans enjoy the upcoming track.”

Now the upcoming episode will unfold the fact that Preeta and Karan will unite or not and will Preeta be able to save the Luthras?

Hyderabad– Rashmika Mandanna has spoken about her upcoming movie ‘Pushpa’ and her leading man Allu Arjun’s dedication for each shot of the film.

As ‘Pushpa’ is all set for its release in a couple of days, she Rashmika has been busy promoting Sukumar’s directorial.

In a conversation with IANS, Rashmika shared her experience.

Starring beside Allu Arjun in ‘Pushpa’, Rashmika thinks Sukumar is one of the most talented directors she has worked with. “‘Pushpa’ is a raw, rustic movie, which requires detailing minute things, which Sukumar is famous for. I was amused when I got this offer,” she said.

Talking about how she was roped in for the movie, Rashmika said, “The makers of ‘Pushpa’ wanted an actress who would also be familiar with the Chittoor accent. So, I had given three look tests before we shook hands for the movie.”

As Rashmika spoke about her experience as an actress, Rashmika stated that she had to unlearn many things for this role, as director Sukumar wanted to bring an organic appeal to it.

“We actors never got to learn our dialogues beforehand, as we had to go unprepared. Under Sukku sir’s direction, he keeps everything organic. We walked into the sets, where we are given our dialogues. We had to pick up the scenario on the spot,” explained the ‘Dear Comrade’ actress.

The actress mentioned that it was quite difficult for her to shoot for the ‘Saami Saami’ song. “We shot it in a remote area and we worked really hard on it. Allu Arjun would monitor each shot after it was done, and he gives the best suggestions,” she said.

The songs, trailer, and posters for ‘Pushpa’ have been received well as she said, “I love the way people have responded to them.”

What makes the win special is that Harnaaz was born in the year when Lara wore the crown. Harnaaz is being hailed as destiny’s child.

Sushmita, who’s seen a comeback to the limelight in Ram Madhvani’s web series ‘Aarya’, which is now in its second season, posted two pictures of Harnaaz from the pageant and wrote in the caption: “#yehbaat ‘Har Hindustani Ki Naz” Harnaaz Kaur Sandhu #MissUniverse2021 #INDIAAAAAA Soooooo proud of you!!!! Congratulations @harnaazsandhu_03.”

She added: “Thank you for representing India so beautifully, for bringing back the Miss Universe Crown to India after 21 years (by a 21 year old, you were destined). May you enjoy every moment of learning & sharing this incredible global platform @missuniverse will provide you … MAY YOU REIGN SUPREME!!!”

Lara, too, shared a picture of Harnaaz and wrote: “My dearest @harnaazsandhu_03 , when I spoke to you yesterday, you promised me that ‘it will be worth it’!! YOU are worth all your triumphant glory and much, much more!! You had an unshakeable belief in yourself and JUST KNEW, you were born for this!! You were born in the year I won Miss Universe!!!”

She added: “That’s how long we’ve waited for you to come along and lift that crown once more for India!! Perhaps, it was destined!! I know what lies in store for you, and I wish you a glorious reign!! May this only be the start of the heights you will scale! God bless you, my heartiest congratulations to your parents and family! The universe now is your oyster. OUR STAR!”