Mumbai– Actress Gauahar Khan who played ‘Zubina’ in the social comedy drama ’14 Phere’ opens up on playing diverse roles in the film.

This film is about mischievous wedding plans with laughter and drama. Directed by Devanshu Singh, the film stars Vikrant Massey and Kriti Kharbanda along with Gauahar Khan and Jameel Khan in pivotal roles.

Sharing her experience, Gauahar said: “As an artiste one always looks to have their abilities attain new horizons. I think the best part about being an actor is that you get to experiment with different kinds of roles. With ’14 Phere’ I got to play three diverse roles, with characteristics much different from one another. I play ‘Zubina’, an aspiring artiste who plays the fake mother to both Vikrant and Kriti respectively for the two weddings.”

She adds: “I was required to portray two people much older than me while keeping the integrity of an aspiring actress. The character was sketched out for me in detail, so I had a set idea of what I was expected to do. My most favourite part about weddings is the madness and behind the scenes masti and Devanshu sir’s organised vision for this film unfolds the most fun wedding on-screen.”

The world television premiere of ’14 Phere’ is on October 24 at 12 noon on &pictures.

Mumbai– Madhuri Dixit Nene is easily India’s one of the biggest and most loved actresses. Be it the iconic track ‘Ek Do Teen’ from ‘Tezaab’ where she revolutionised dance in Bollywood or her work in films like ‘Anjaam’, ‘Koyla’, ‘Dil To Pagal Hai’ and ‘Pukar’, the actress has always enthralled the audience and has enjoyed their undivided attention.

Recently, she shared a quirky Instagram reel where she can be seen dancing her heart out. Well, dancing comes naturally to Madhuri and she makes the perfect use of this skill in the video.

Dressed in a royal blue pocket dress paired with beige coloured stilettos, the actress grooved to the beats of the hugely popular song from TikTok ‘It has pockets’. She rounded up her look with minimalist earrings and open wavy tresses. The reel got a thundering applause from her fans as they were overjoyed to see their idol treating them with her impeccable talent of dancing once again, this time on their phone screens.

The reel clicked especially with the women of Instagram as having a pocket-friendly (pun intended) dress is a rare feat in women’s clothing. The absence of pockets in their dresses results in a lot of struggles for women in terms of carrying around their stuff. Madhuri’s quirky reel not just brings a chuckle on the audience’s faces but also comes with a strong relatability factor to all the women out there.

Mumbai– Actress, VJ and singer Anusha Dandekar is making headlines after her new post that she shared on social media about her participation in ‘Bigg Boss 15’.

There was a rumour going around on her entry on the show and being the ex-girlfriend of Karan Kundrra, people were expecting more twists in the show. But Anusha has recently nullified all such stories and requested everyone to stop making such assumptions.

At the end of her long post, she clarifies on not being part of the show. She wrote: “So again this is my life, my happy place. And for the love of God please stop this nonsense about me going on ‘Bigg Boss’ to fill some page in an article, to stir up some more drama, which I’m not even a part of. I told you my truth, every quote or picture I post now is not about my past, it’s about MY growth! This is about ME! Stop undermining my achievements as a self-made woman. I am the Boss of my own life, I don’t need to be in any house to prove it. So sleep easy the people that are so unhealthily obsessed with it. Thank you to all of you, who just let me live and spread happiness.”

She also talked about her life and health in the initial parts of her note saying: “I am so grateful for my health and the last few days I laughed more than I have in a long time, I received so much love, happiness, warmth and kindness. I was in beautiful locations and got to shoot my new campaign there as well (can’t wait for you to see!) The weather was perfect, I tried some of the yummiest food, I danced, I swam, I shopped and woke up to the peaceful ocean and the Burj! The perfect combo for me, a beach baby and a city girl! And I was with two of my best girlfriends.” 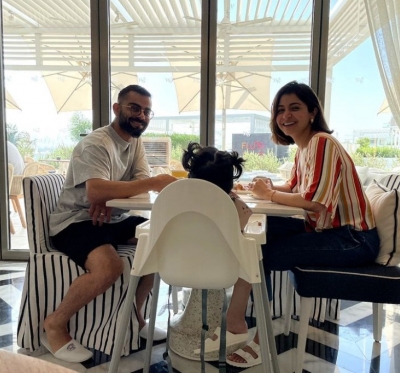 Virat shared the picture on Instagram, where the three are seen sitting and enjoying breakfast. Virat and Anushka look into the lens and smile while Vamika’s back is towards the camera.

Virat chose a heart emoji to caption the image, which currently has 2.6 million likes on the photo-sharing website.

Vamika was born on January 11. Anushka and her husband Virat, who are fondly called as ‘Virushka’ by their fans, had tied the knot in December 2017 in Tuscany, Italy.

Katrina Kaif’s ethnic look is a treat for sore eyes

Mumbai– As the audience prepares for the Rohit Shetty directorial ‘Sooryavanshi’, Katrina Kaif has been running pillar to post with regards to the promotions of the film. However, the fans have no complaints as the string of promotions continues to bring us Katrina’s most dazzling looks.

The actress recently took to Instagram to share a few pictures of herself from the promotion streak where she attended Colors’ show ‘The Big Picture’ with her ‘Sooryavanshi’ director Rohit Shetty.

She captioned the image as, “??vibes for #bigpicture #sooryavanshiintheatres.”

‘The Big Picture’ host Ranveer Singh was quick to react with a comment on the actress’s post. He wrote, “What a blast k! ?? ???? thank you for coming and making it such a special episode ! (sic)”.

Katrina embraced a Sabyasachi Mukherjee creation, a burnt orange coloured saree with an embellished blouse having a heavy sequin embroidered torso and floral sleeves. Complementing her attire were the emerald and stone adorned drop earrings and, her open and tresses.

She kept the accessories to a bare minimum in order to draw the attention towards her clothing. Katrina’s sartorial choices have always caught the attention of both her fans and the fashion enthusiasts, it’s safe to say that the actress is an absolute head turner. (IANS)