Bengaluru– The pre-wedding celebrations of Bollywood actress Deepika Padukone, who will marry actor Ranveer Singh later this month, began with a traditional puja at her hometown here.

The designer wished the actress for new beginnings.

“A new and exciting journey has just begun for you and all of us at Sabyasachi wish you the very best. Always. Deepika Padukone in Sabyasachi for her pre-wedding functions,” Mukherjee posted on Instagram.

There is a buzz that Mukherjee will design the bridal dress for Deepika, who has been dating Ranveer for around six years.

Even the actress’ stylists shared photos from the puja.

Ranveer and Deepika announced that their wedding ceremony will take place over two days on November 14-15. It was announced via social media after months of speculation about the nuptials of the couple who have starred in films like “Goliyon Ki Raasleela: Ram-Leela”, “Bajirao Mastani” and “Padmaavat”.

Sonali on Thursday evening shared a photograph of herself along with Priyanka and veteran actress Neetu Kapoor.

“It’s always lovely to be part of someone’s special moment and more so when it’s a dear friend. What a fabulous evening Priyanka Chopra! Your bridal shower was filled with so much love and laughter. I wish all that and more for you as you take this next big step. Big hug and much love,” captioned Sonali, who was sporting a red dress and a wig.

She added: “It felt so great and also somewhat strange to wear a bright colour again! Red is the colour of rebirth.”

In the last week of October, Priyanka’s friends and family hosted a bridal shower for the actress ahead of her wedding with pop singer Nick Jonas here.

The two got engaged in August in a traditional Roka ceremony at her residence in Mumbai.

Chennai– Actress Adah Sharma has been roped in to play the leading lady in the Telugu investigative thriller “Kalki”. 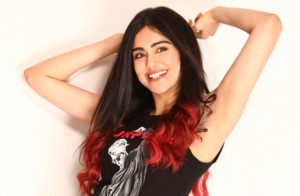 Adah on Friday tweeted: “My next Telugu film will be ‘Kalki’, which is an investigative thriller. I always try to do something different and like ‘Heart Attack’, ‘SOS’, ‘Kshanam’, I hope I can bring something new to this film too! I’m super happy to be the leading lady in a film directed by Prasanth Varma.”

“Thrilled that they chose me to play the leading lady. Can’t wait to start. Need all your love and blessings,” she added.

Mumbai– “Dangal” actress Sanya Malhotra, who has broken her image with “Badhaai Ho”, says after doing a few more movies, she would like to take a break to learn tap dance.

A dance enthusiast since she was young, the young and spirited actress spoke about it in an interview with Mallika Dua on the sets of “Midnight Misadventures with Mallika Dua”, read a statement.

Sanya said she is a self-taught dancer, and has been actively dancing since young.

“I started dancing when I was a three or four-year-old kid and performed on the ‘Tu cheez badi hai mast mast’ song. Dance makes me really happy and after my fifth or sixth movie, I would like to take a sabbatical to learn the tap dance form,” Sanya said.

On her love for food, Sanya said: “I love to cook, especially for my friends. For ‘Pataakha’ movie, I had to put on 12 kg and that was the best part about that film. I used to eat bananas, ice cream shakes, pan cakes, fries and dal chawal which is my favourite food. It was amazing.”

Mumbai– Actor Siddhant Karnick shot a scene in water for television show “Kaal Bhairav Rahasya 2”, and says it was a new experience for him.

“I love water and this is the first time ever in my life that I have performed a scene in water and delivered dialogues at the same time. It was a great and a very interesting experience for me,” Siddhant said in a statement.

The actor will be seen playing the role of Yashvardhan in the Star Bharat show, which reveals an unsolved mystery of a family based in a fictitious village set in Madhya Pradesh.

After the success of the first season, “Kaal Bhairav Rahasya” in its second season, narrates an engrossing and gripping tale of a royal family residing in Kanakgarh, which has been under the spell of a deadly curse for 150 years.

Mumbai– Actor Rana Daggubati, who has replaced veteran actor Nana Patekar in “Housefull 4”, has started shooting for the film.

Rana on Friday tweeted: “Heading to the sets of ‘Housefull 4’. Shooting in Mumbai after a very long time!”

The 33-year-old actor replaced Nana after the latter was accused of sexual misconduct by actress and former beauty queen Tanushree Dutta on the sets of 2008 film “Horn OK Pleassss”.

“Housefull 4” has been dogged by controversy. In October, filmmaker Sajid Khan stepped down as its director oafter he was accused of several sexual harassment incidents.

He has been replaced by Farhad Samji.