Bipasha: With my debut character, I had an opportunity to explore my range

Mumbai– Actress Bipasha Basu’s debut movie ‘Ajnabee’ has completed two decades since its release in Hindi cinema on Tuesday. She says with her maiden character itself, she had an opportunity to explore her range as an artiste.

Taking a stroll down memory lane, Bipasha said: “Not very often do you get a chance to perform a character so nuanced and unconventional for your first film. With Ajnabee, I had so much to do with my role.”

She added: “A thriller peels like an onion – layer by layer – and it allows you to play with those layers. So, with my debut character Sonia itself, I had an opportunity to explore my range as an artiste. It was an incredible experience to work with Abbas-Mustan and the whole team.”

Mumbai– The debut film of Palak Tiwari, daughter of celebrated TV actress Shweta Tiwari – ‘Rosie: The Saffron Chapter’ – will be released in October, confirms the producer of the film Prerna V. Arora.

Speaking about the release of the film, producer Prerna said, “We are happy to announce that ‘Rosie’ will be releasing this October. The film is based on a real-life incident that happened in Noida and our main focus in this film is about ‘Akal Mrityu’ and the effects they have on the family and friends. The teasers released already gave the audience a peek into the story and the response to them was mindblowing. We can’t wait to see how the audience reacts to the film.”

The film is a spooky horror love story shot in various locations in India, including Pune, Lucknow and other cities.

Kangana targets Alia for appearing in ad, says it is ‘anti-Hindu propaganda’

Mumbai– Actress Kangana Ranaut, most recently seen in the Jayalalitha biopic ‘Thalaivii’, took to her Instagram account on Tuesday to call out actress Alia Bhatt and her commercial for a jewellery brand that questions the tradition of ‘Kanyadaan’. 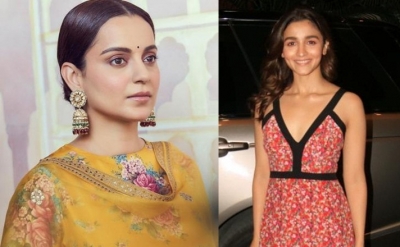 In the commercial, Alia’s character, a bride, is seen wondering if women were ‘paraya dhan’ (someone else’s wealth) meant to be given away to a man during ‘Kanyadaan’. The bride declares at the commercial’s end: “‘Kanyadaan nahin, kanya maan’ (Don’t give away your daughter as a gift; give her respect).”

Kanagana put up a long post on her Instagram account, highlighting the importance and history of ‘Kanyadaan’ in Hindu culture. She also accused the brand of engaging in “anti-Hindu propaganda” and asked her followers to seek a ban on the advertisement.

In another post, where she explained Hindu marriage traditions, she added in the caption: “Don’t become a pest who loves to abuse and condemn Hinduism just because it is the most tolerant religion.”

Mumbai– Actress-entrepreneur Shilpa Shetty will be seen as a judge for the talent-based show Indias Got Talent. She says the country is brimming with talent.

“India’s Got Talent’ is a show that I have closely followed over the years. So naturally, I am thrilled to join the judge’s panel of the show,” Shilpa said.

“This is the first time that I will be judging a reality show that is based on not just dance, but a diverse range of skills. India is a country brimming with talent and I am happy to be one of the drivers of shining the limelight on deserving performers,” she added.

Shilpa has been seen as a judge on various dance-based reality shows like Super Dancer’, Nach Baliye’ and Zara Nachke Dikha’.

Arjun Kapoor: My fitness journey has changed the way people look at me

Mumbai– Actor Arjun Kapoor, who has battled obesity and gone through a physical transformation, says his fitness journey has changed the way people look at him and that the film offers coming to him have also changed.

Arjun said: “People have been kind enough to notice my transformation. My fitness journey has not only changed the way I look at food, nutrition and fitness but it has also changed the way people look at me. The opportunities and offers coming to me have also changed.”

Arjun will have some exciting new announcements as he ventures into the food and fitness space.

The actor added: “I have definitely initiated multiple conversations to explore myself in the food and nutrition space and I’m excited for some of the things that will materialise soon. I will be in a position to share more concrete details in the days to come.

Arjun, who currently awaits the release of his next ‘Ek Villain 2’, says he wants to be a part of ventures that are “aiming to revolutionise the fitness space.” (IANS)