Mumbai– Actor Aparshakti Khurana may travel the world and it seems he prefers his trousseau to travel, too! He recently wore a blue velvet suit at an event, which had to be flown from London to Mumbai.

The actor recently hosted a beauty event in Mumbai and looked dapper in the blue velvet suit. Apparently, the suit was transported via four flights from London to Mumbai, to reach the actor in time.

Aparshakti acknowledges that the wardrobe was very important for him.

“I think blue is the new black. This look was really special as a big fat event was happening almost after a year. Kudos to my stylist Jay Samuel who made sure that it reaches India in time. He honestly worked really hard on this look,” Aparshakti said.

The actor completed the look with a pair of blue giuseppe zanotti moccasins.

Bhopal– Actor Arjun Rampal on Wednesday shared videos and pictures from his ongoing trip at Satpura Wildlife reserve. The actor is holidaying with girlfriend Gabriella Demetriades and three children, daughters Myraa and Mahikaa and son Arik. 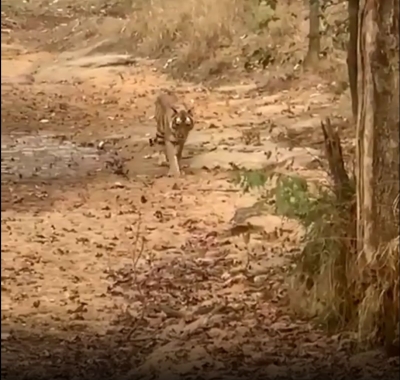 “An absolutely mesmerising and fantastic day at Satpura tiger reserve yesterday, spotted a tigress, a tiger stalking gaur, three sloth bears a mother and cub and on booe solo. Lots of other beautiful animals. This is the oldest and largest forest reserve in India at #mptourism has done a fantastic job of relocating 47 villages around the sanctuary to create a larger more safer space for the animals. A must visit here is recommended,” he captioned his pictures and videos.

The actor will soon be seen in the film Dhakaad starring Kangana Ranaut. He plays the villain in the film.

Achint Kaur on how she makes negative characters real and human

Mumbai– Actress Achint Kaur has opened up on her preparation for a negative character in the second season of the web-show Jamai 2.0.

“Normally, what happens is when characters are grey I have to make them very real so the audience perceives my side of the story, of how I am handling a situation as a human being. So, yes, we try to make the character as real and convincing as possible and, more than anything, I think the bottomline is the belief in the character itself and the conviction I have,” she said.

Mumbai– Sunny Leone fears people might forget her name someday. So, she posted a swimsuit picture on Wednesday, wearing a hat with her name on it.

“Just in case anyone forgot my name, it’s on my hat!! Hehe,” the actress captioned the photograph.

“My little nuggets are 3! Asher Singh and Noah Singh Weber you both are so so different but are the sweetest, nicest, caring, intelligent little men. I can’t believe 3 years have passed and you both amaze me everyday with what you have learned and all the things you say,” she wrote with the image.

Mumbai– Nushrratt Bharuccha notes how rapper Honey Singhs songs have always been a highlight in her career as an actress, and adds that featuring in the video of his new song Saiyaan Ji has been special for her.

Nushrratt said: “Saiyaan Ji is close to my heart as it is my first single music video with Honey Sir. This is our fourth song together, after ‘Dil chori’, ‘Care ni karda’ and ‘Chote chote peg’ and with the song now crossing 100 Million views, we have maintained our winning streak.”

“The fact that the song has become such a massive hit is an amazing hype for us,” the actress added.

The actress recalls shooting just after lockdown for the song.

“The song is special to me as I shot for it right after lockdown was lifted. That time, I was in the middle of promoting Chhalaang, and was running from one activity to another, but somehow we fixed up dates and worked it out – even if it meant shooting for 18 hours a day,” she recalled.

Nushrratt added: “We are all very elated with the result that we have delivered a blockbuster song!”

The actress has Hurdang, Janhit Mein Jaari and Chhorii coming up. (IANS)