Chandigarh– Ahead of the declaration of the Lok Sabha results, veteran Bollywood actor Anupam Kher on Thursday said India’s future would be even more brighter in this festival of democracy. 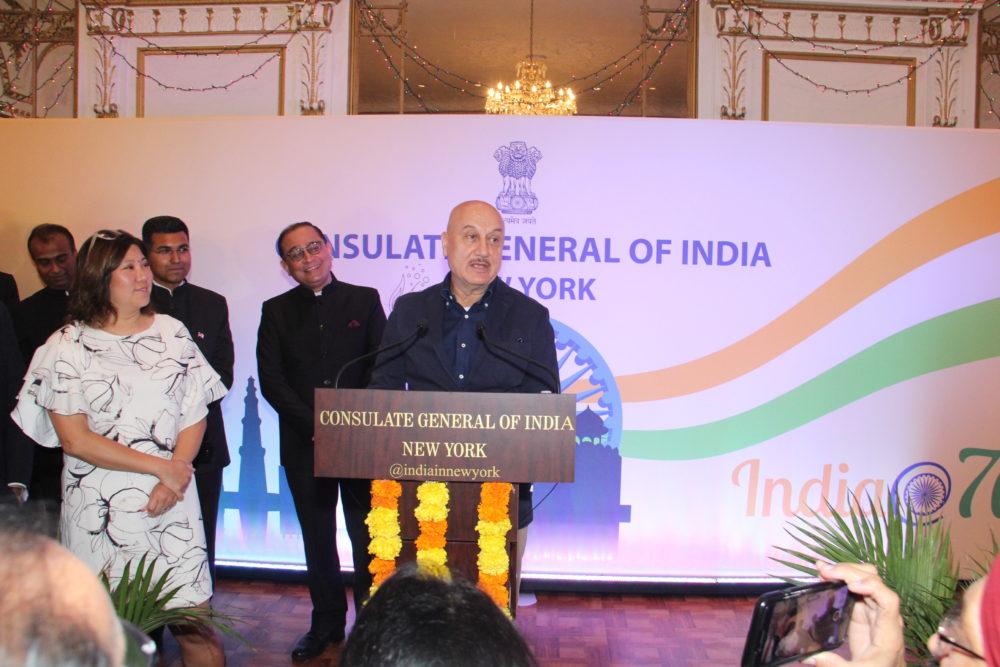 The actor had been campaigning for his wife and BJP candidate Kirron Kher, who is seeking re-election from this city.

My gut has never let me down: Ayushmann Khurrana

New Delhi– Actor Ayushmann Khurrana says he is known for middle-of-the-road cinema, where there is a collaboration of critical and commercial success.

“It’s a default setting for me to choose novel content. I’m always known for middle-of-the-road cinema, where there is a collaboration of critical and commercial success. It’s also my intuition,” Ayushmann told IANS.

“My gut has never let me down. I look at stories as a layman and an audience member. I make films that I would like to see myself. It feels great that my choices have been accepted so far,” he added.

After his stint on the small screen, Ayushmann entered the industry in the role of a sperm donor in 2012 with “Vicky Donor”. He faced failure with “Nautanki Saala!”, “Hawaizaada” and “Bewakoofiyaan”. But he returned with a bang with “Dum Laga Ke Haisha” as a school dropout, who hesitantly marries an educated but overweight girl.

He will next be seen in “Article 15”, “Dream Girl”, “Bala” and gay love story “Shubh Mangal Zyada Saavdhan” — the second part of the 2017 film “Shubh Mangal Saavdhan”. He will also be seen with megastar Amitabh Bachchan in Shoojit Sircar’s upcoming film “Gulabo Sitabo”.

But what about getting into production or directing a film?

“I would love to produce and direct at some point, but as of now, I’m content with my acting and music,” said the actor, who has been roped in as the brand ambassador of globally renowned watch brand Daniel Wellington.

Tiger will always have soft corner in my heart: Kriti

Mumbai– Actress Kriti Sanon, who completed her five-year-journey in Bollywood on Friday, says her first co-star Tiger Shroff will always have a super soft corner in her heart.

Kriti made her Bollywood debut in 2014 with the romantic thriller “Heropanti” alongside Tiger Shroff, who made his acting debut with the film.

“I saw his hard work, his discipline and passion and I knew he is going to blow people’s minds away. You’ll always have this super soft corner in my heart Tigy! Tiger Shroff, I feel so happy seeing you fly higher and higher (literally too),” Kriti tweeted.

The 28-year-old actress wished Tiger for the five-year anniversary.

The film revolves around a girl Renu, who elopes with her lover. Her father, Chowdhary, kidnaps Bablu who knows Renu’s whereabouts, along with two of his friends. But Bablu falls in love with Dimpy, Chaudhary’s younger daughter.

Kriti is currently shooting for “Panipat” and Tiger will next be seen sharing screen space with actor Hrithik Roshan.

Mumbai– Bollywood’s livewire actor Ranveer Singh turned Deepika Padukone into an ‘adorable baby’ using a Snapchat filter on a photograph of his actress-wife.

The photo-messaging application has introduced a new filter that transforms adult faces to look like a baby.

Ranveer on Thursday posted a photograph of Deepika’s famous “lime green” Cannes 2019 look, but with a twist. He applied the ‘baby filter’ and transformed the “Padmaavat” star into an adorable child.

The “Gully Boy” actor captioned the image with a lot of emojis and tagged Deepika.

The star couple got married in an intimate wedding at Lake Como in Italy last year.

On the acting front, Ranveer is currently busy prepping for his next “’83”. It follows how, under captain Kapil Dev, the Indian cricket team defeated West Indies in the final of the World Cup in 1983. It tracks the coming-of-age of not just a cricketing team but of a young nation in the eyes of the world.

Mumbai– The first shooting schedule of Mahesh Bhatt directorial “Sadak 2” has been completed, and actress Pooja Bhatt is convinced something “special” is taking shape.

Pooja, also a part of the sequel, took to social media on Thursday and wrote: “And it’s a wrap for our first schedule of ‘Sadak 2’. You know you’re onto something special when you wake up the morning after with a longing to be back on set. Thank you to the entire crew for everything and more.”

The first leg of the film was shot in Mumbai.

While commencing the shoot, Alia had said she was petrified.

“Today is Day 1 of ‘Sadak 2’. And that’s my father, now also my director, holding the clap. I begin shoot in a few days and honestly, I’m petrified. I feel like a tiny mouse trying to climb a beautiful, immense, emotional mountain. I hope I make it to the top and if I fall I hope I’m able to get up again.

“But from everything I’ve seen and everything I’ve heard, I know every single step and misstep will be worth it! Here’s to movies, family, dreams and starting out on a brand new journey! And what a journey it’s going to be,” Alia had posted on Instagram.

It marked the first time TED was collaborating with a major network to produce a TV series, featuring original “TED Talks” in Hindi.

As for the new season of the STAR Plus show, Shah Rukh shot the first episode for it on Monday.

The first season was shot at the Yash Raj Films Studio. But this time, the shoot is taking place at the Filmistan Studios, a source told IANS.

Some of the names likely to feature in the second season are acid attack survivor Laxmi Agarwal, whose life has inspired Deepika Padukone’s next film “Chhapaak”, and actress Tanushree Dutta, who opened the floodgates of India’s #MeToo movement, the source told IANS.

“The Hundred-Foot Journey” producer Juliet Blake, head of Television for TED Talks, is currently in India to curate the speakers and themes for the new season.

Kareena, along with her actor-husband Saif Ali Khan was interacting with dietician Rujuta Diwekar about their diet and lifestyle, when the actress was asked about her two-year-old son’s diet.

She said: “I am hyper paranoid. He (Taimur) goes to birthday parties and he is not allowed to eat outside. But that’s also wrong, but ya…”

Saif added: “He eats chips, though.”

She ensures having a plan in place.

“Every month I alternate it accordingly. Whatever fruits and vegetables he should be eating in the month… he quite enjoys it. Today, he actually had saag (spinach) for lunch and he normally didn’t like it but I have been shoving it down his throat. So now he’s got used to it. So he actually ate the whole bowl.”

On the acting front, Kareena is currently busy shooting for “Angrezi Medium”, while Saif is looking forward to the release of his next film titled “Laal Kaptaan”, which is slated to hit the screens on September 6. (IANS)