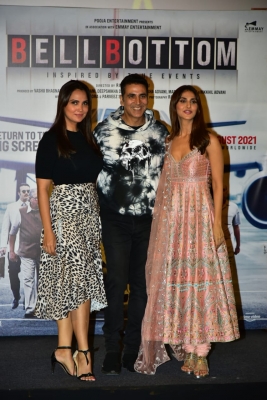 Mumbai– Actors Akshay Kumar and Vaani Kapoor were spotted at the international airport here on Tuesday, as they left for Delhi to launch the trailer of their upcoming film ‘Bell Bottom’.

This will be the first big film promotion taking place in New Delhi from the time the Covid-19 pandemic started.

Producers Deepshikha Deshmukh and Jackky Bhagnani were also spotted leaving for the capital.

Aparshakti opens up on his Punjabi version of ‘Baspan Ka Pyaar’

Aparshakti told IANS: “When I heard ‘Baspan Ka Pyaar’ for the first time, it made me chuckle, but I was equally fascinated by it. That’s when I decided to make a rehash of the song that is now making our whole country groove to its tune.”

He released the full Punjabi version of the viral song on his Instagram page at the request of his followers. Aparshakti released three versions of the song with his own spin to the lyrics.

Talking about the three versions, he told IANS: “First was the reel version. The second was the Bhangra version with Dhanashree and the latest is the full version of the song. All of them have been showered with love and compliments and I now feel I should move on and focus on ‘Adulthood Ka Pyaar’, which is to entertain people.”

The kid Sahdev has become quite popular with his video ‘Baspan Ka Pyaar’. Aparshakti shared he isn’t sure if he is going to launch the kid, but would love to meet him. “Well, as of now we don’t know when that’s going to happen. But, I would surely like to meet Sahdev, the adorable kid who sang this song.”

Aparshakti sang his first song in 2016 ‘Ik Vaari’ and ‘Teri Yaari’ in 2020. He has played pivotal roles in films like ‘Dangal’, ‘Saat Uchakkey’, ‘Badrinath ki Dulhaniya’, ‘Pati, Patni Aur Woh’ and many more to his credit.

Mumbai– Richa Chadha’s script of her production venture ‘Girls Will Be Girls’ has been selected as part of the international features section at this year’s ‘Gotham Week’. The actress hopes to be able to find “like-minded” investors and collaborators to make the “exciting film”. 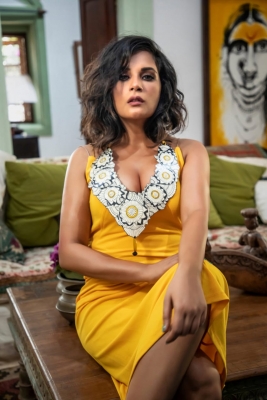 Gotham Week is an annual event that brings together storytellers from films, television, and audio and is sponsored by Netflix, Amazon Studios, Audible, SAGindie and WarnerMedia. It will be held virtually this year between September 19-24.

Richa said: “We hope to be able to find like-minded investors and collaborators at Gotham Week to join us in making this exciting film. It is a fresh and feminist story, and I believe Shuchi is a new voice in Indian cinema.”

The team recently wrapped up shoot for a pitch video/teaser, and hope it will help with fundraising at Gotham Week.

Shuchi Talati, who has been roped in to direct the film, added: “Girls Will Be Girls deals with gendered power dynamics and female sexuality and I’ve always thought the story would resonate internationally so I’m really happy about this selection.”

Talati added: “I hope Gotham Week will be a launchpad for us as we fundraise and build a mostly female crew. I hope people reach out to us.”

Aalisha Panwar on her role in ‘Teri Meri Ikk Jindri’

Mumbai– Actress Aalisha Panwar has been roped in for the show ‘Teri Meri Ikk Jindri’ to play the character of Jogi’s (Adhvik Mahajan) childhood friend Avneet. She will be portraying a modern Punjabi girl full of confidence and passion.

Panwar who is known for her roles in ‘Ishq Mein Marjawan’ and ‘Meri Gudiya’ says initially she was not keen on accepting this project because her character is subdued amidst two lead personalities.

The 25-year-old actress adds: “When I was approached to play a character in this show, I was quite skeptical of taking it up and I had almost said no to this character, but I was convinced to hear Avneet’s story, and after that I felt compelled to say yes. She is a really strong and powerful girl who is set to bring a very interesting and thrilling twist to the current storyline.”

‘Teri Meri Ikk Jindri’ is a love story of two starkly different personalities – Mahi (Amandeep Sidhu) and Jogi (Adhvik Mahajan). Their love story has been developing well with numerous twists and turns. Bringing forth another interesting angle in Mahi and Jogi’s lives will be Avneet, Jogi’s childhood friend.

Aalisha divulges details and talks about her character, as she says that this character is quite different from her previous ones and anybody can relate with Avneet very easily.

“I really loved how the character has a very close connection to reality. You will find Avneet as someone who loves in abundance but can also get envious. There is a lot that she can give, but she also knows how to take back. So, I am really looking forward to playing the role of Avneet. I sincerely believe that it’s going to be a great journey for me,” she concludes. (IANS)