Mumbai– Actress Aishwarya Rai Bachchan and Jaya Bachchan along with other Bollywood personalities attended a prayer meeting to bid the last adieu to Nargis Rabadi, popularly known as ‘Shammi Aunty’, on Thursday here. 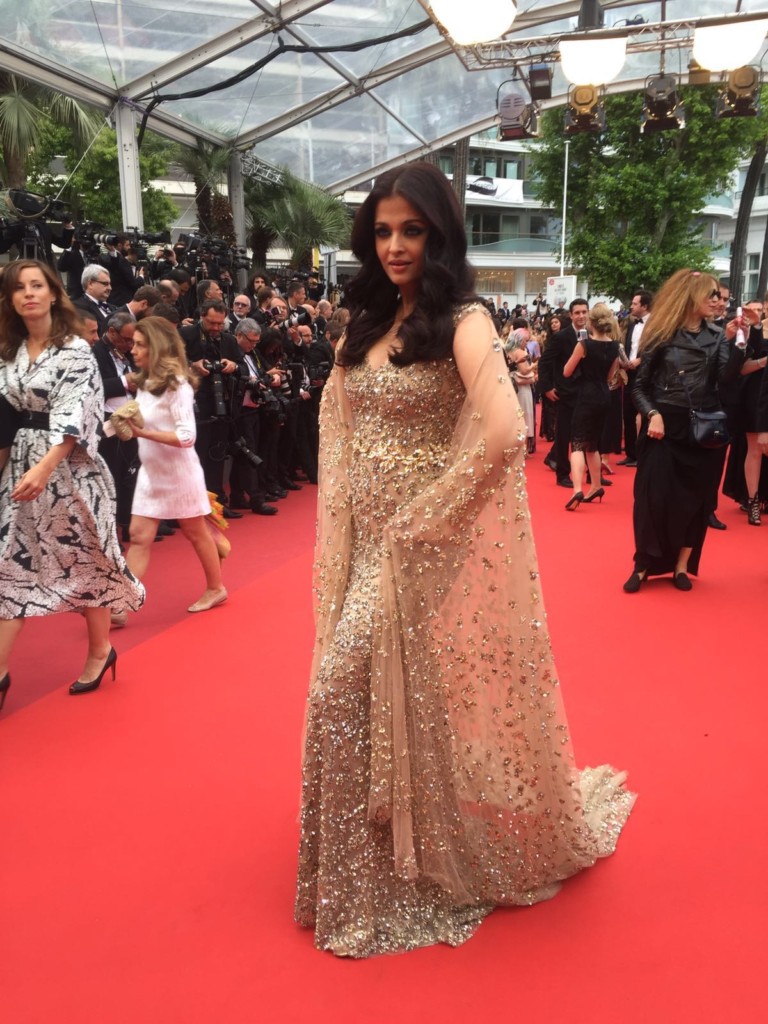 The veteran actress passed away at the age of 89 on Monday night, leaving behind a legacy of work and goodwill.

Aishwarya along with mother-in-law Jaya were among the first to turn up, followed by Aruna Irani, Farida Jalal, Poonam Sinha and Maya Alag.

Others like Amitabh Bachchan, Rishi Kapoor, Shabana Azmi and Abhishek Bachchan took to social media to mourn her.

In a career spanning over five decades and over 400 films, Shammi did everything from lead roles to character roles to bit-sized parts. Toward her later years, she replayed the garrulous granny over and over again.

Shammi began her career in a character part in Sheikh Mukhtar’s “Ustaad Pedro” (1951) before making her debut as a heroine in “Malhar”.

Mumbai– Debutante film director Aleya Sen is quite excited about her feature film “Dil Juunglee” and says that coming from an ad film background, entering into the feature film field was a natural progression for her.

“I am a restless person by nature who is always looking to trying out something new. At the same time, I love telling stories so I started writing the story of my film, observing my own people whom I meet every day,” Aleya told IANS.

“I am already an ad filmmaker and have done some videos as well. So making feature film was a natural progression.”

The film revolves around the love story of Karoli and Sumit played by Taapsee Pannu and Saqib Saleem, respectively. According to Aleya, casting them was an interesting story.

“We met at the set of a music video which I directed. Their off-screen chemistry made me decide to cast them together. They bonded so naturally,” she said, adding: “I did not keep any other actor in mind when I wrote the story.”

Asked if the female protagonist is an extension of her personality, Aleya said: “Well, like Karoli, I love reading love stories and at a young age I used to think that my boyfriend will be as perfect as a character from a love story.

“But with time we all grow mature and understand life better. Our priorities change. In this film also, the story goes through different phases of a love story. So yes, there are some similarities, some imagination.”

Mumbai– Actor Kartik Aaryan says he shares an “amazing relationship” with his “Pyaar Ka Punchnama” and “Sonu Ke Titu Ki Sweety” co-star Nushrat Bharucha, but he has clarified that there is “no affair”.

Kartik was at the cover launch of the latest edition of Health and Nutrition’s March edition here on Thursday.

Clearing the air about the bond he shares with Nushrat, with whom he has featured in four films, Kartik said: “My relationship is amazing with Nushrat, and there is no affair.

“It is a very friendly relationship that we have. We have been working together for a pretty long time. It is always good to perform with an actor who is good and inspires you to do better.”

On the success of “Sonu Ke Titu Ki Sweety”, Kartik said: “I cannot express how happy I am with its success. The box office numbers and critical acclaim that the film has received is great. People have told me that they have watched the film seven times. Such reactions are coming in the industry after a long time and being a part of such a film is great. I am happy with the success of the film.”

Kartik enjoys a huge female fan following due to his chocolate boy looks and loverboy roles.

Talking about the kind of woman he would like to date, he said “A simple and sweet girl who is focused on her work. The girl could be from anywhere, from the industry or outside. If I ever get into a relationship, it would be such that both of us would respect each other.”

The actor said he will be making some “big announcements” very soon.

During an episode of “India’s Next Superstars”, Bhatt inspired some of the aspiring actors by sharing a story about Sridevi while shooting with the actress for his film “Gumrah” (1993), a statement said.

“While shooting for ‘Gumrah’, we had to shoot a water sequence for which Sridevi was needed. I was informed that she is down with fever and we might have to postpone the shoot,” he said.

“Worried about her health, I met her in her room and requested her that we continue shooting when she is fine because her condition was really bad. To my surprise, she refused to postpone the shoot,” he added.

Talking about her hard work, he said: “Sridevi shot inside water for hours with fever and didn’t say a word because she was so professional. I salute her spirit and I miss her dearly.”

Sridevi passed away following an accidental drowning in a bathtub in her hotel room in Dubai on February 24.

Mumbai– Actress Jacqueline Fernandez, who hails from Sri Lanka, says she always wanted to be an entertainer but didn’t plan getting into Bollywood.

The actress — an investor as well as ‘believer’ for Raw Pressery — has penned down her thoughts about her journey in blog, which went live on International Women’s Day on Thursday.

“Since a very young age, I’ve always dreamt of being an entertainer. Wanting to tell stories, make everyone around me laugh. For me it was never about the films but the pure joy that comes with being an entertainer. That dream, that joy is something that had me drawn towards it,” Jacqueline said.

“Entering Bollywood pretty much happened by chance. In Bollywood, it’s not just about entertaining, but also an artistic form of expression through dance, acting and dialogue that has the potential to stir thousands of emotions.

“Your audience relates to you. Lives the character through you. All the strength to live up to my dream of being an entertainer has come from constantly growing as a performer and to focus on my strengths. It might sound a little too good to be true as you read, but believe me, once you start living by it, you’ll feel the difference yourself,” she added.

Born to a Sri Lankan father and Malaysian mother, Jacqueline was raised in Bahrain. At the age of 14, she was hosting a fitness show. She moved to Australia to attend college and then returned to Sri Lanka where she took up a reporting job.

The year 2006 turned to be a game-changer as she won the Miss Sri Lanka beauty crown. She made her debut in the Indian film industry with the 2009 film “Aladin”.

Mumbai– Actor Krrip Suri of “Jeet Gayi Toh Piyaa Morre” fame has turned a composer with his first original single “Dil Na Jaane”. He says he believes in originality and will not do cover music.

“I believe in originality. People do make covers but I don’t like to do those and I never will. We want to make our original music and bring forth new stories. That hard work and uniqueness is what will win the world for us,” Krrip said here at the launch of his song.

He said the song took shape during hectic shooting schedules.

“It took me at least 6 months to complete the story for the track.”

Krrip’s wife Simran Kapoor Suri, who is playing his love interest in the single’s music video, also spoke about the challenges she faced as a first time performer in a music video.

“For me, this was something completely new. Since it is my first music video, I started my homework early while Krrip was still working on the track. I had no idea about the technicalities, but working with such a happy and supportive team made it very easy,” she said.

The single is presented by Mumbai Medley in association with Krrip Kapur Suri production, and is sung and composed by Krrip himself. It has released on the Youtube channel The Musik Gurus.

Shetty worked with Tiger on the song “Beat pe booty” and this year’s track “Mundiyan” from the forthcoming film “Baaghi 2”.

On collaborating with the “Baaghi” actor, Shetty told IANS: “Tiger is a choreographer’s actor. You can make him do anything. He will follow you and make your work look even more superior.”

The audience loves Tiger’s dancing skills. But what are his shortcomings?

“Yes, Tiger is an amazing performer. As far as his shortcomings are concerned, I know that he works really hard for everything, and that is how all his shortcomings become his power points,” said the choreographer who has also worked with actors like Akshay Kumar and Varun Dhawan.

“Baaghi 2” is directed by Ahmed Khan, who is also a popular choreographer. Did he give suggestions to Shetty?

“Yes, he is the captain of the ship. He is an inspiration to me. So, it was like an examination for me to choreograph this song (‘Mundiyan’). I tried my best to do justice to it,” he said.

When he is not working on films, reality shows like “Nach Baliye” keep him busy.

“I am the child of reality shows. That is why I still choreograph reality shows and keep myself updated with the new styles and techniques. But yes, I have plans to do my own reality shows in future,” said the choreographer, who became popular after participating in “Dance India Dance Doubles”.

What about directing a dance film?

“I am just following in footsteps of my mentors, Ahmed Khan and Remo D’souza. So, I am going to direct a film in the near future for sure,” said Shetty, who also acted in D’souza’s 2013 film “ABCD: Any Body Can Dance”.

The song was released on Thursday on the occasion of International Women’s Day. The ‘Bas Ab Bahut Ho Gaya’ campaign is an initiative by Population Foundation of India (PFI) along with Farhan’s MARD – Men Against Rape and Discrimination, and director Feroz Abbas Khan.

“Women can be truly empowered when they cease to fear discrimination and violence, and it is imperative that our men and boys play an active role in making this possible. Challenge regressive norms, build a new world where equality, dignity and safety for women and girls is a reality – that’s the message we would like to spread on the International Women’s Day,” Khan said.

The song “Chulein aasman” is sung by Farhan and Salim Merchant. It is written by Farhan along with Shraddha Pandit, and composed by Salim-Suleiman.

“Through the anthem ‘Chulein aasman’, we would like to call upon all Indians to value girls and women, and to be part of our campaign ‘Bas Ab Bahut Ho Gaya’ for ending all forms of violence against them,” Poonam Muttreja, Executive Director, PFI.