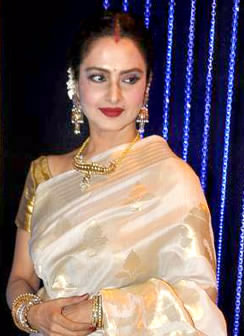 Mumbai–Veteran actress Rekha was honoured with the Yash Chopra Memorial Award on Monday evening in Mumbai for her contribution to the film industry. The award has been instituted by the T.S.R. Foundation of T Subbarami Reddy in the memory of the producer-director, who died in 2012.

“Am honoured to be bestowed this award in Yash ji’s memory. Yash ji thought me how to love & I am eternally grateful for the memories & films that I have had the privilege to be a part of. “I can only say that this is not the climax, this is only the best phase of my life and there is a lot more to come. What I learnt from Yash ji is that if you love someone then you should love with alll your heart so that there is no scope of loving anything else,” Rekha said.

The Foundation annually honours a distinguished senior film personality for outstanding contribution to film industry with a Gold Medal and a cash prize of Rs 10 lakh. Rekha, 61, who worked with Chopra in 1981 romance “Silsila”, will be given the honour by the Governor of Maharashtra in a glittering ceremony in Mumbai. Previous recipients include Melody Queen Lata Mangeshkar and megastar Amitabh Bachchan.

“When I saw the interview, I was hurt. I felt really bad. I think if there is a good script and nice character, then I don’t have any problem to work with her,” Aamir told reporters on Monday while celebrating the 10th anniversary of his film “Rang De Basanti”.

Have to build physique like Sushil Kumar for ‘Dangal’: Aamir Khan
Mumbai– Actor Aamir Khan, who has gained weight for his next movie “Dangal”, says he has to now lose the same weight and make his physique muscular and low-fat like that of Olympic medal winner Sushil Kumar for the next part of the shoot.

“‘Dangal’ is almost 90 percent over. All of you are aware that I’ve put on weight for the film. But very few are aware that for ‘Dangal’, I have to reduce my weight, build a physique because during the initial 10-15 percent of the film. I’m a national level wrestler like Sushil Kumar ji,” Aamir told the media on Monday at the 10-year celebration of his critically acclaimed film “Rang De Basanti”.

The film is slated to release on Christmas this year.

Dhanush looking forward to Hollywood debut
New Delhi–Dhanush is headed to Hollywood and is excited about his new destination. The southern star says he is glad to be making his debut in the West with “The Extraordinary Journey Of The Fakir Who Got Trapped In An Ikea Cupboard”, in which he will be sharing screen space with “Kill Bill” star Uma Thurman.

The actor thanked his fans and admirers for giving him the strength to tread new creative zones, adding that he hopes to explore and bring forward different “facets” of the character in the film directed by Iranian-French director Marjane Satrapi.

Dhanush took to Facebook to share his views about venturing into Hollywood with the film, which will also star Bandit Queena actress Seema Biswas, Alexandra Daddario, Barkhad Abdi and Laurent Lafitte. “I am very excited by this opportunity to work in a full length Hollywood film ‘The Extraordinary Journey Of The Fakir Who Got Trapped In The Ikea Cupboard’ for the first time.

“According to me, this industry is striving on very few hits. I hope the industry receives several hits because this industry has the capability to give you a lot. But at the moment, the industry is going through loss,” he said. Akshay has been one of the consistent performers at the box office over the years, delivering at least 3-4 films a year. While most of his films do well, even the ones which don’t live up to expectations recover costs.

Last year, all of his four films — “Baby”, “Brothers”, “Gabbar Is Back” and “Singh Is Bling” — earned close to Rs.100 crore at the box office. He said it would be great if “Airlift” is declared tax-free but said he wasn’t aware of such a development till now.