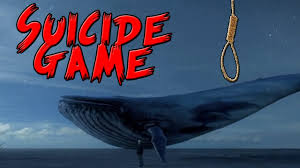 Jaipur– A teenage daughter of a Border Security Force (BSF) trooper has been rescued from a Jodhpur lake in Rajasthan, preventing her from becoming the latest victim of the online Blue Whale game.

The Class 10 student jumped into the Kaylana Lake on Monday night. She had the image of a blue whale carved on her arm with a knife, signifying that she completed all stages of the macabre game.

“I saw a girl driving a Scooty around the lake. I was suspicious as it was around 11 p.m.,” said Om Prakash, a handcart vendor who pulled her out from the waters.

Speaking to IANS on telephone on Tuesday, Prakash said: “I followed her and suddenly saw her jumping into the deep lake. I, too, immediately jumped.”

After rescuing the teenager, when Prakash asked her why she tried to end her life, she said if she failed to complete her task, then the game’s administrators had threatened that her mother would die.

The Blue Whale game is targeted at teenagers and forces them to perform several dangerous activities, finally leading them to commit suicide. The game has claimed many lives worldwide. (IANS)